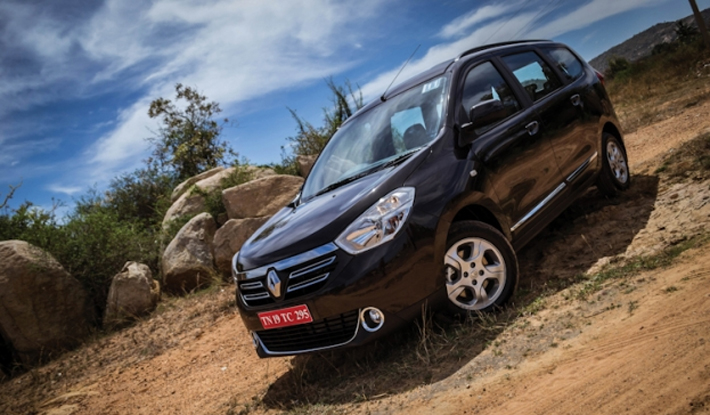 It’s not like there were too many options, really. The Renault folks had just asked my photographer and I which Lodgy we’d like for our drive — the one in white, or the one in black (or purple? Mauve? I can’t tell — the weather was too hot for my liking). It didn’t matter; you could come to a conclusion on the car’s aesthetics either way. Viewed in profile, the Lodgy seems really long. It’s not Innova-long, but it’s just 87mm shorter than the Toyota. That, in addition to a wheelbase of 2810mm, should give you an idea about how serious Renault is about making this a true 7/8 seater. Viewed head-on, the Lodgy looks rather nice. Granted, there’s a huge amount of chrome which would usually lose it points in my books, but on the Lodgy, it works well. Simple, straightforward, elegant lines make up the car, and it works well for the most part. The only glitch is when you get to the back — Renault’s designers seem to have been inspired by Sid, the ground sloth from Ice Age.

Once you’re done squinting at the rear and trying to figure out what went wrong, though, step inside the car and things take a turn for the better. It’s evident, immediately, that parts-sharing is the name of the game here — there are quite a lot of bits from the Duster. The most obvious is the touchscreen audio system nicked from the AWD variant launched just a bit ago, and the rotary climate control knobs. That said, it’s no bad place to be in. Everything’s functional and in its place. The steering has controls for the audio and cruise control, the instrument cluster’s clear and legible, the dash has a pleasing ‘Gris Fume and Beige Alpaga’ two-tone theme going for it, whatever that means, and it’s easy to find a good driving position via the manually operated seat adjustments. It comes well loaded, too — there are dual airbags up front, roof-mounted blowers for the second and third row, reversing sensors and a parking camera, and even ABS+EBD with Brake Assist, among others. Not much else required, really, for an MPV in this segment.

The car we had was a 7-seater, which means captain seats in the middle row. Although comfortable for long journeys, what was a bit cumbersome was the fact that they were fixed seats, so moving back and forth isn’t possible and you’re at the mercy of the two up ahead when it comes to legroom. The third row is a bit of a mixed bag. It’s wide enough, sure, but at one point I’m certain my knees hit my chin when we ran over a bump. On to the driving impressions, then. Renault’s crammed the Lodgy with its ubiquitous 1.5-litre K9K engine, and just like the Duster, there are two power outputs on offer — 85 PS and 110 PS. Our drive had no 85 PS variants, so I’ll focus on the 110. The 108.4 bhp VGT engine comes into its own post the 2000-rpm mark, and thereon there’s a linear surge of power. What’s good is its drivability, NVH levels and refinement. What could be better is its highway manners; anything beyond 120 kph and the steering goes a bit numb, and thereon it doesn’t really inspire you to go faster. The monocoque body rolls and sways uncomfortably when you chuck it into corners, which can lead to scary outcomes at times. The gearbox itself is smooth and slots into cogs well. The 110 PS comes with a 6-speed manual, whereas the 85 PS gets a 5-speed shifter. At slower speeds, though, it’s a lot more comfortable, taking speed bumps and ditches in its stride rather well.

The bigger picture, however, reveals that the Renault Lodgy is a capable performer overall. If Renault can target a competitive price, then its list of pros is hard to ignore. It’ll look to target the likes of the Maruti Ertiga and Honda Mobilio primarily, and rightfully so because it’s got the goods to take them on, while any prospective Innova customers coming around for a look will be a bonus. A sub – Rs 9 lakh price tag should set the ball rolling for Renault.