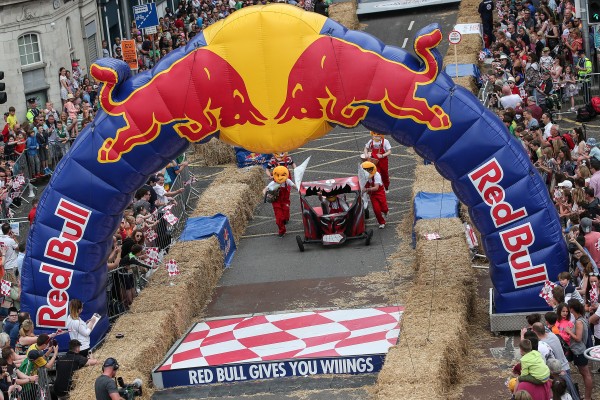 For the second time in India, there is going to be a Red Bull Soapbox race, and it is going to be held in Mumbai on the 13th of November. The first Soapbox race in India was held in 2012, in Bandra, but this time around the venue has been shifted to Powai.

Although the registrations have been closed, the Soapbox race is a free event, anyone can come and watch it. Essentially a downhill race, teams participating in the Soapbox will have to construct a freewheeling motor-less cart with steering and braking capabilities, with points given for design creativity and time taken to complete the course. The carts are powered by gravity as it races down a downhill course with some turns thrown in. To keep the playing field even, Red bull lays down some rules and specifications of the cart that everyone must follow. The design of the cart or the theme chosen, though, is entirely upto the team. This creates a number of outlandish entries, and the therefore, the fastest team to finish the course is not necessarily the winner. For example, there is a team called Dino Titan this time, and they are going to barreling down the hill in a T-Rex shaped cart.

Although it might sound a bit silly at first, but the Red Bull Soapbox race is a very hard fought race, all over the world. Red Bull has been holding these races since 2000, and since then over a hundred races have been taken place, in cities all over the globe. The fact that F1 driver Max Verstappen had entered in one of the races, and some of the teams reach close to 70 kph, should give you an idea of the competitiveness.