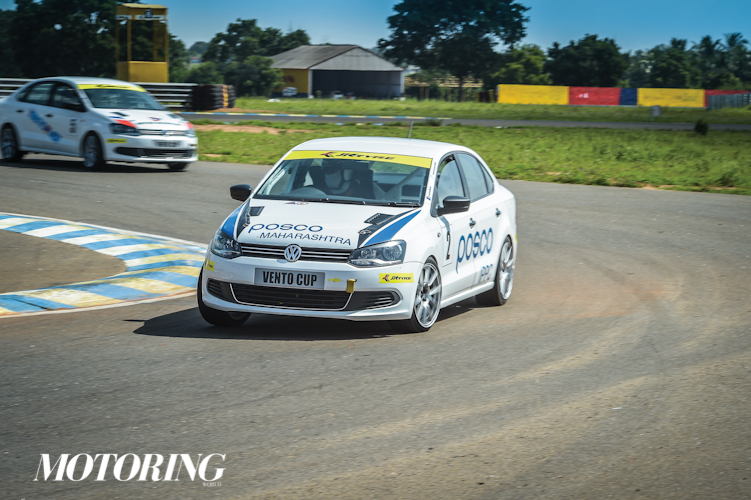 Any time someone says ‘race car’ to an enthusiast, our eyes light up with memories of races watched on the telly, of our heroes with superhuman vehicular control doing impossible things with extraordinary machines. So when someone says, ‘Would you like to drive our race car?’ we’re already falling past the roll cage into the car before they’ve finished asking. Since Ashok, our resident racer, was off vegetating on vacation, I got the opportunity to sample the 2015 Vento Cup Car.

The cars look perfectly ordinary from the outside — they’re ordinary Vento body shells. They’re lowered and a little negative camber to the wheels is noticeable, that’s all. The inside is stripped of all things and a roll cage is installed as is a racing seat and a racing wheel. The seat isn’t made for people as… er, ‘big’ as I am, and changing seat position is a big process that involves unbolting the seat from the floor, moving it, checking whether the new position is better and then adjusting the many seat belts that go into a racecar. I thought that was difficult work, until I realised I had to get in and out through the small aperture that the roll cage permitted multiple times until the seat was at an appropriate position. No wonder racers are fit and small!

We were taken out in race Polos first. The engines weren’t modified, but race exhausts were fitted and changes similar to the Vento’s chassis and suspension have been made to these cars. The Polos have a manual gearbox and JK tyres made for wet racing. These are relatively slow, but essential for familiarisation of the track. After being shown the ideal racing line on the track, we were let loose for a few laps to get a feel for the cars. With no ABS, braking was always a tricky affair on the limit and much fun was had for the rest of the first half-hour session.

Next up, the Ventos. Thankfully, they had measured the seat position when they adjusted it in the Polo, so it was almost perfect right from the start. The Ventos are considerably different from the Polos; they have a twin-turbocharged 1.4-litre engine that produces 180 bhp and 25.5 kgm. It puts this down to the ground through a 6-speed DSG gearbox, a limited-slip differential and slick tyres. With weight at just over 1200 kg, the Ventos start making you think more about braking points and harder braking on a twisty track like the Kari Motor Speedway in Coimbatore. The race ABS put in a lot of peace of mind, though, and surprisingly for a race car, the Vento didn’t bite if you made an error or got overzealous with left-foot braking.

It understeers, but the LSD makes a good fight of it before bowing to the inevitable. Of course, that didn’t stop a couple of us overenthusiastic journalists from spinning anyway, but there was a remarkable lack of out-of-control cars for the half hour that we occupied the track. The engine was also quite tractable and when I missed the right gear, the wide powerband helped me get back up to speed quickly.

VW says that the Vento Cup car is specifically tuned this way so that novices don’t have a steep learning curve. A few races is all it takes for them to get on the pace — but the car couldn’t be boring for the veterans, either. They’ve achieved a good balance with the Vento Cup car, for sure; after a half hour of driving around the track, we were called in and then a few journalists wanted to go out and drive some more. You can’t have a better compliment than that!