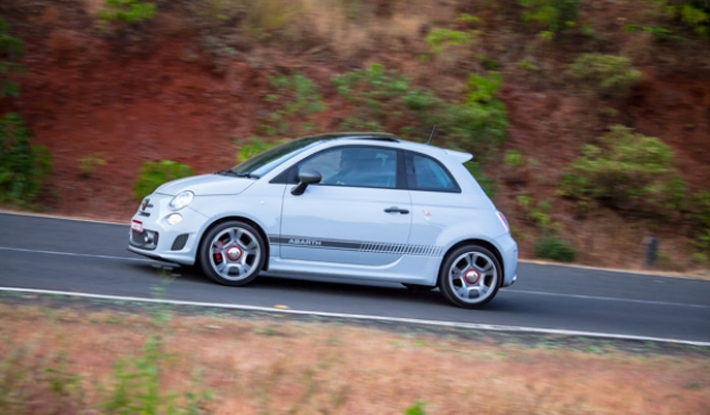 ‘It’s good to be bad’ says Jaguar’s new television commercial. Well, yes, I’d agree, but all that glorification of the British as the best baddies is simply pathetic. British villains are miserable, with gaping loopholes in their master plans which the Americans always identify by the time everything begins to explode.
The reason the British don’t make the best baddies is simple – because the Italians do. With razor sharp hairstyles, shoes more exquisite than a Sunseeker Portofino, an air of casual carelessness and an unrefined aggression that one can only be born with, Italians are simply the perfect bad boys. It’s natural, given the history of Italy, a country where progress and turmoil co-exist in a sort of democratic symphony, where passion and rage tread a thin line, where beauty is everywhere, but you still have to fight to attain it.

The two machines here are built around two pretty acceptable Italian stereotypes. One is a classic case of ‘good guy gone bad’ while the other is simply disinterested in playing by the rules. The Fiat 500 Abarth is, of course, the former. A perfectly cheeky looking car that’s grown a dark side, quick on its feet but without making much of a racket about it. In the Sicilian mafia, the 500 Abarth would play the role of the charmer, the one that would slip through thicker doors given its inherently good looks and mannerisms, and still somewhat blend in a crowd once the job is done.

The Benelli BN600i, on the other hand, would be rejected by the Sicilians for being too extroverted. It looks like the creation of an Italian who had, well, a good time while on assignment in South Korea, and it’s absorbed much wisdom from its brief stint hob-nobbing with the Yakuza in Japan. It has willingly adapted to an in-line four – not the conventional Italian recipe for creating trouble – and it seems nonchalant about it. It’s loud, feels more Japanese than Italian, and it has a wild side to its overall calm persona.

Being smart villains (unlike the British…) they’ve kept their rivalry discreet and, under the pretext of spreading good cheer in India, have come face to face. We happened to witness it, were subsequently dragged into it, and boy, is it good to be bad or what?

What Have They Got?
The Abarth first. A 1.4-litre turbocharged four-cylinder petrol powers it and it produces a menacing 160 bhp. Doesn’t sound like much, I know, but when you consider its puny dimensions and 1075 kg kerb weight, you can tell it means business. This one is the 595 Competizione version, which means it’s far more serious than any other 500, and it wears its intent on its sleeve. Matte surfaces have replaced much of the chrome, it’s wearing a somewhat gloomy cement grey, and it’s no longer a cheerful little Technicolor bubble. It’s got stiffened up springs, race-spec seats (the second row of seats is best left for a silenced Beretta AR70 and a sandwich, though), a fantastic audio unit and an automatic gearbox with paddle-shifters – all you need for that swift getaway from the scene of crime.

The Benelli BN600i is different. It’s red, it’s somewhat large, and it makes its muscle pretty apparent. Be it the four-into-two pipes that emerge from the motor and end in a neat stack under the seat, or the liberally designed fuel tank – the BN600i is one impressive looking motorcycle, but just not very Italian in design. It’s powered by a 600 cc in-line four cylinder motor (sourced from the early Yamaha R6, mind you) that produces an impressive 80 bhp and is paired to a somewhat tall 6-speed gearbox. There’s a 15-litre fuel tank, basic but relevant meters, and three disc brakes in all, so your getaway from your last ‘take-out’ can be meticulously executed with no chance of error.

Which Is More Agile?
Agility is important if you’re Mafioso. Round the twisties, even more so. The 500 is gifted like that, thanks to its 2300 mm wheelbase and near go-kart-like stance. Also helping matters are the negligible overhangs at either end and the direct steering, all of which work together in making the 500 an excellent handling package. The meaty rubber wrapped around those gorgeous wheels offers absolute grip, despite the Abarth’s tendencies to give you a mouthful of torque steer every time you stomp on the gas pedal in the lower gears. It absolutely snakes through traffic, feels substantial enough on the open road and is fun while at it.

The BN600i is all of the above and more. There’s negative overhang at either end (one of the perks of being a sporty motorcycle) and the wide handlebars offer excellent leverage. It’s a full-scale motorcycle, which means it’s tall, wide and meaty, but somehow not very intimidating. It feels more like a sport tourer in its approach to tight corners, in that it will do as you say but not in a telepathic manner. The tyres are pretty grippy, save for the fact that the ones on our test bike were polished, which made fully committed cornering a dicey proposition. It’s not the best knee-down tool around, frankly, but steep lean angles are very much possible and then there’s the small matter of being able to whack open the throttle and dart across into the sunset. The 500 Abarth feels more naturally suited to corners, while the BN600i is more fun around them. Save me the trouble of picking a winner, will you?

Which Is Faster?
No great math, this. From a seat of the pants perspective, it’s the Benelli that’s quicker and faster overall, and not without reason. It accelerates like them delicious Jap in-line fours from the nineties (sounds like one, too) and it’s almost scary how high this thing revs. Shift up and you’ll notice it takes time to gather steam, but when it does, you’re simply hanging on, hoping the absence of ABS won’t land you in a soup. It’s geared tall and seems like a good sport-touring package but used right, it can be a pretty potent hooligan. I had no room to exceed 180 kph, but it’ll do forty more with ease I think.

The 500 Abarth is fast, too, but frankly, I’d rather they’d have left it alone. It’s a nice motor, the 1.4 MultiAir, but it’s massively let down by the 5-speed automatic gearbox. Here’s a gearbox that not only is most ill-suited to the Fiat 500 but also to any car in the world. It’s simply hard to gauge what’s on its mind and then, when you take over manual controls, it still takes a while before shifting up or down. The combination of an unpredictable gearbox and bucketloads of torque steer means losing out on precious seconds worth of fun – and that’s not alright. The regular manual transmission (not on sale in India) is just so perfect (and results in quicker acceleration times, too!), I wish Fiat would have just flown that one in. A go-faster Fiat that can’t be driven fast is just not my recipe for fun.

Which Is The One?
As much as the gearbox on the Fiat 500 is an irritant, it still is a very cool car. As the sky turned crimson with just a little while to go before dark, I drove the 500 through the last of the hills, windows down, sunroof retracted, and it was one of the coolest motoring experiences I have ever had. You pull off a heist, knock off interfering members of the polizia and then, once it’s all done, roll up your sleeves, slip in some funk, and drive away into anonymity. Like that thought, don’t you?

The BN600 is similar, too. When pushed to the core, it can be ballistic but pretty much as soon as you ease off, it transforms into a mild-mannered motorcycle you could probably ride all day long. I wish it were lighter, narrower – it would be every in-line four aspirant’s dream, then! But yes, it can slither through traffic with ease and agility and still has enough room for some strap-on luggage and an elaborate highway haul. Versatile? Yes, once you get used to it. Fit for The Job? Absolutely. I guess it’s time to draw out the white flags now…