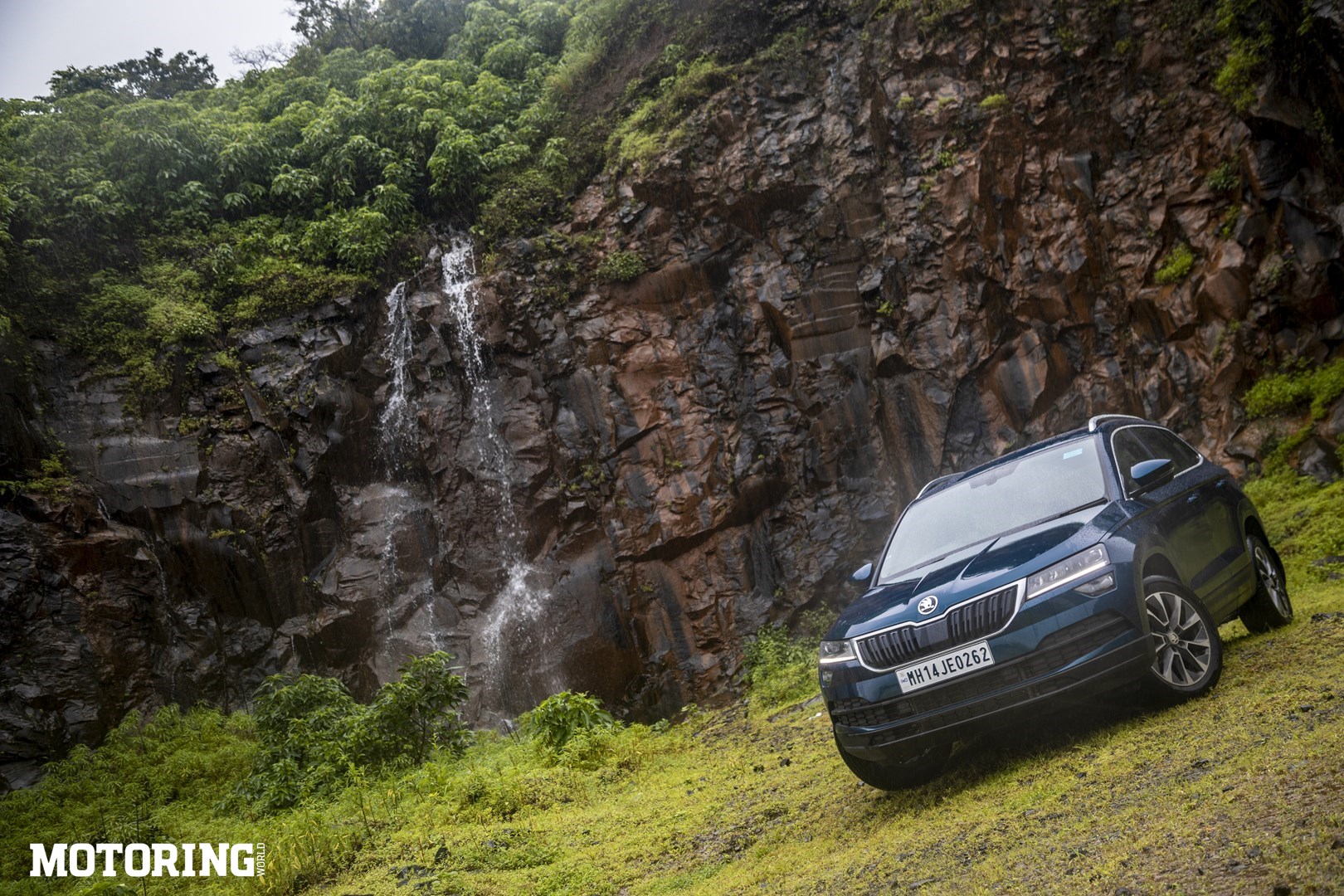 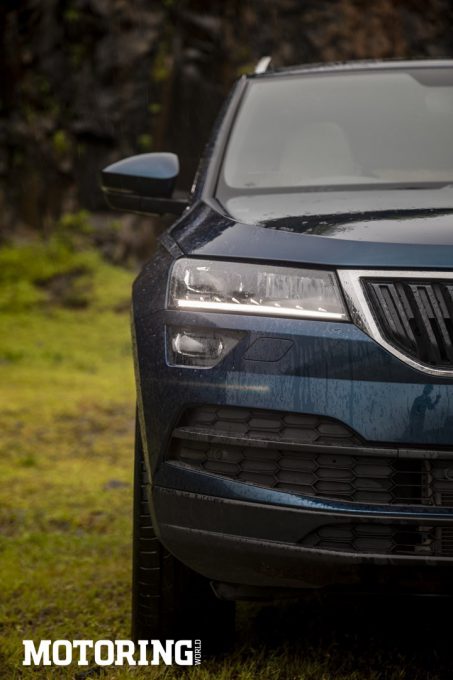 When Skoda launched the Yeti in India ten years ago, it quickly became my favourite car on sale in the country. Not one of my favourites, it was right up there at the top. It had compact dimensions, a brilliant all-wheel￾drive powertrain, was built well, and looked like nothing else on the road. Sadly, the market wasn’t ready for a car like the Yeti and it was discontinued. Now, Skoda brings us its replacement, the Karoq, and it has a lot riding on its shoulders. You can instantly recognise the Karoq as part of the Skoda family and from a distance, it’s difficult to tell it apart from its larger stablemate, the Kodiaq. The face is similar, but you can use the headlamps and foglamps to tell them apart. The Karoq has thinner squared-off units with foglights placed directly underneath. At the rear, it’s a little easier to tell them apart because of the unique tail-lamps and bumper covers. In profile, the Kodiaq is much, much longer and that definitely sets them apart. With the Karoq, 17-inch anthracite alloy wheels fill out the squared wheel arches well and give it a purposeful stance. Where the Yeti stood out in a crowd and polarised opinion, this one blends in without any drama.

The cabin is a very inviting place and bears strong resemblance to the Superb and the Kodiaq. A large 20.32-cm touchscreen infotainment system with Android Auto and Apple CarPlay compatibility takes centre stage and is flanked by vertically￾oriented HVAC vents. All the major vehicle functions are controlled by physical switches and the temperature control knobs are nice and tactile. The Karoq is available in one fully-loaded trim level and it includes features like a virtual cockpit, two-zone automatic climate control, a 12-way adjustable driver’s seat and a tyre pressure monitoring system. The interior is upholstered in beige leather and the Karoq also comes with a large panoramic sunroof to brighten the already airy cabin.

Though the Volkswagen T-Roc and Karoq are built on the same platform, the Karoq is much larger inside. In fact, it’s even wider than the Tiguan AllSpace. The rear seats are comfortable and offer good under-thigh support, too. The second-row of the Karoq is wide enough to accommodate three people in relative comfort, except for the fact that the center tunnel eats into the middle passenger’s legroom.

The Volkswagen group is taking a step back from diesel engines in the country, so there’s no chance of a torquey TDI engine making it under Karoq’s hood. So, like the T-Roc, the Karoq is powered by the same 1.5-litre TSI engine that makes 148 bhp and a healthy 25.5 kgm of peak torque in this application. In the city, the 7-speed DSG struggles to keep the car going smoothly in start-stop traffic. It’s not nearly as smooth as a torque￾converter automatic, but as soon as you hit the open road, you’ll start to appreciate its quick-shifting nature. The engine doesn’t mind bumbling around at low rpm; response isn’t great at those speeds, but as the revs rise and the boost kicks in, it really comes alive. This engine produces a plateau of torque between 1500 and 3500 rpm, and it is in this sweet spot that you can have the most fun behind the wheel. If you ever feel like you could use a little more power, just tug at the paddle shifters behind the wheel and you’re placed back into the meat of the powerband. Speaking of having fun behind the wheel, I can tell you that the driver’s seat is definitely the best seat in the car, not just because it’s power-adjustable. The Karoq is very engaging to drive spiritedly;

The driver’s seat is definitely the best seat in the car, not just because it’s power-adjustable the steering provides enough feel and feedback that you know what the front wheels are up to. The car takes corners pretty enthusiastically as well, while the compliant suspension soaks up bumps and does so without unsettling the car. It can take everything our post-monsoon-apocalypse roads can throw at it without batting an eye. 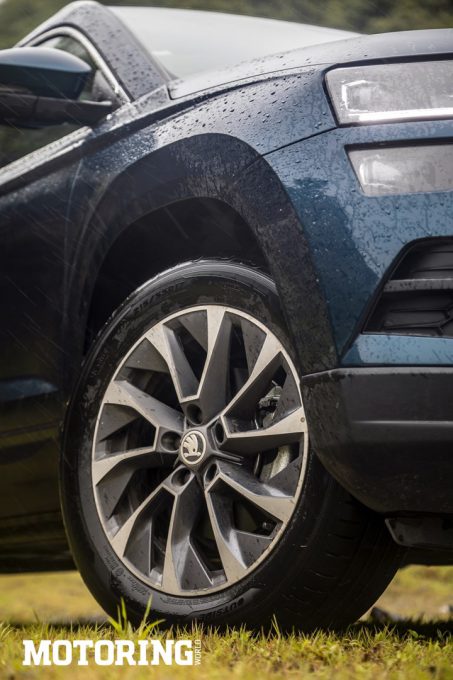 Some of the larger bumps do make themselves felt in the cabin, but everything else is dealt with without any drama at all. As speeds increase, the Karoq tends to wash the front end wide, and the only thing that would improve its performance on a twisty back road would be the inclusion of all-wheel drive. I mean, it already has the central tunnel, might as well install a driveshaft in there and enjoy the benefits of the extra traction. Right? The Karoq is brought in as a CBU priced at Rs 24.99 lakh, ex-showroom, India. It lands square in the middle of some very competent competition. However, with its fresh looks, comfortable cabin and excellent driving dynamics, the Karoq has definitely become my new favourite SUV. 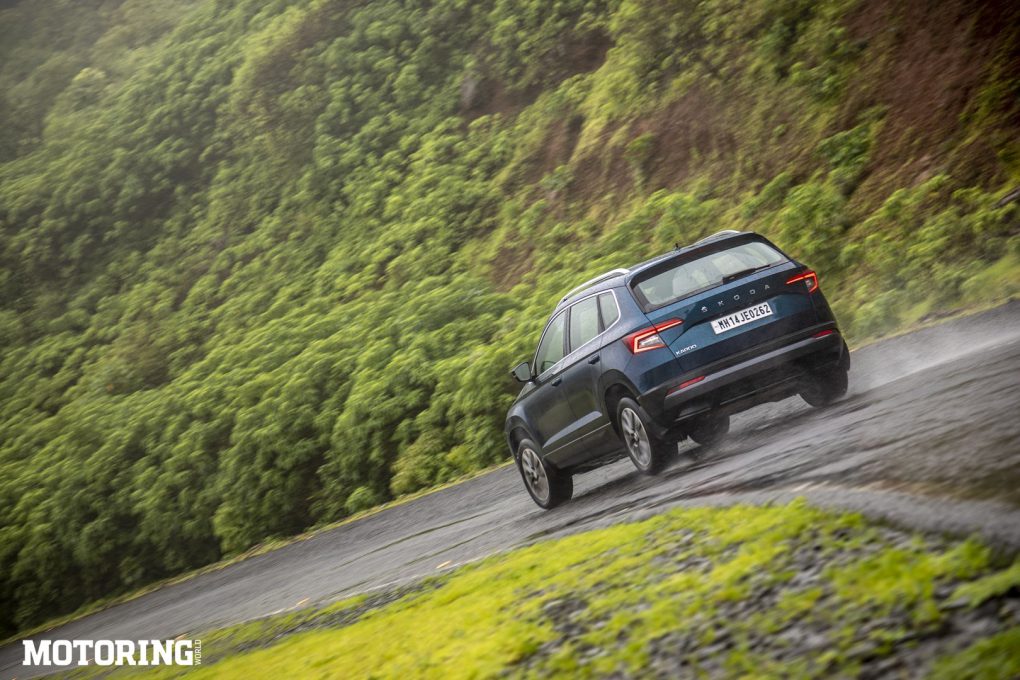