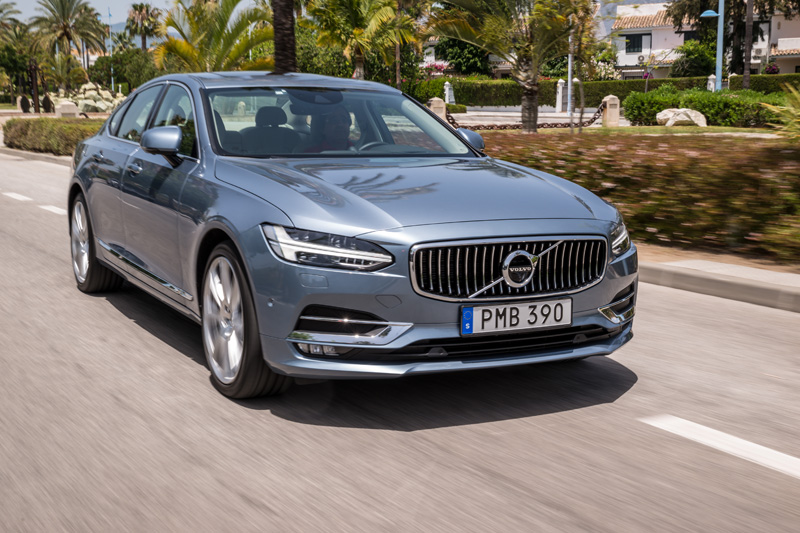 Ask anyone what they think of Volvo and only one word will come up every single time – safe. It’s an image which Volvo has worked hard to earn and it undoubtedly deserves it, too, since their cars are indeed amongst the safest in the world. In India, however, their safety tag has not been the volume puller, like in other markets, which not only reflects our low concern for safer cars, but also makes Volvo rethink their strategy. Over the years, this change in strategy has been assisted with great products like the V40, the S60 and the XC90, and these have been getting in decent numbers and accolades alike. The only model range which was left behind was the S80, and in true Volvo style its replacement, the S90, looks set to create waves.

For starters, the S90 is a looker. It carries forward the same design language as its elder sibling, the XC90, and anything that has Thor’s hammer as its headlight design can only be cool, right?. The concave waterfall grille gives its otherwise neat and clean design a slightly aggressive look. The proportions are spot on, I feel, and Volvo also confirms that it is the longest and widest in its segment. At the back, the LEDs complete the neat look with minimally intrusive badging. All of which compels me to say that in the looks department, the S90 already beats its current competition and will surely turn heads on Indian roads.

If you like what you see on the outside, the inside will only make it better for you. Elegance, grace and luxury combine effortlessly to make the cabin a delightful place. Yes, there are elements carried over from the XC90, but then again that isn’t a bad thing at all. Being the newer model, the S90 gets additional goodies such as a massage function for the front seats and a fantastic Bowers & Wilkins music system as standard. The quality of materials used, the solid wood inserts, the neat layout with a 9-inch infotainment screen and the good leg-room at the back are all things that make the S90 a lovely place to be in.

Now let’s head to the what is under the hood. Sadly, no V8s or V6s, but only four cylinders in multiple options – the D4 and the D5 in diesel, the T5, the T6 and very soon the plug-in hybrid T8 in petrol. For India, the D4 and the D5, for sure, and maybe (hopefully!) the T6. All of Volvo’s diesel engines are under 2000cc and hence escape the NGT ban, so naturally they want to capitalise on that. Both the D5 and the T6 were available for this drive and I naturally chose the T6 first.

The T6 is a four-cylinder, 306-bhp, 40-kgm unit which, as the specs suggest, is fun to drive. Volvo is very clear about the positioning of the S90; it’s a relaxed car, to drive and to be driven in, and the T6 lives up to that intent. Power delivery is linear, but there is nothing aggressive about it. Put your foot down and there is a rush, but it doesn’t tingle your spine. Instead, it massages your spine with sustained power which does not run out of breath soon. It does grunt a bit as you inch towards the redline, but it’s a four-cylinder motor, so that’s part of the deal, I guess. The gearbox is the familiar 8-speed automatic which does its job well, but paddle shifters are sorely missed, especially so on the hilly area of southern Spain. Dynamically, the car is sorted and the all-wheel drive has a big role to play in it. Even at higher speeds, there isn’t much body roll and the T6 doesn’t mind being pushed, either.

Moving to the diesel, the D5 is also a four-cylinder and like most modern diesels, it relies more on the 48 kgm of torque than the 232 bhp of power. What is new on the D5 is Volvo’s new Power Pulse technology, which the company claims will address the turbo lag associated with forced induction. In a nutshell, Volvo’s put a 2-kg can of compressed air which gets released when you kickdown to cover up for the lag. Does it work? The drive I got in the D5 was too short to confirm that it does. However, what I can confirm instead that the D5 is good fun to drive, too. The NVH levels in the car are near perfect and you have to remind yourself that this is a diesel. Yes, it is that silent on the inside.

The S90 carries forward Volvo’s legacy of safety and comes with some really cool features like the Pilot Assist and Run Off Mitigation. Pilot Assist can be activated through two clicks on the steering wheel and it helps you stay on course, which on public roads means the lane you are in. It still needs your hands on the steering, but is a demonstration of Volvo inching towards self-driving cars. There are gentle tugs on the steering when you are swaying off course, and while it works well, I found it a bit eerie. I don’t want anyone tugging at my steering while I drive, but I guess as a safety feature it is quite useful.

Similarly, Run Off Mitigation senses you are going off the road and the car automatically brings you back where you should be. Nope, I didn’t test that one. Volvo’s IntelliSafe system is going to be a standard on all S90s in India and the company is already in talks with the Indian government to get permission to use the blind-spot assist, which I feel will be a really helpful feature.

All in all, the S90 seems to be a complete package. Good looking, well appointed, well equipped, safe and good to drive. Volvo is making no bones about going after the Germans and the Brit in India, and they seem to be more than prepared for the battle this time. For India, the key will be its pricing, as always, and we expect the D5 between Rs 50-55 lakh and the T6, if it comes, between Rs 55-60 lakh. That will certainly be a lot of car for the money. Until Mercedes-Benz brings out the new E-Class, the S90 might be the car to beat in this segment.