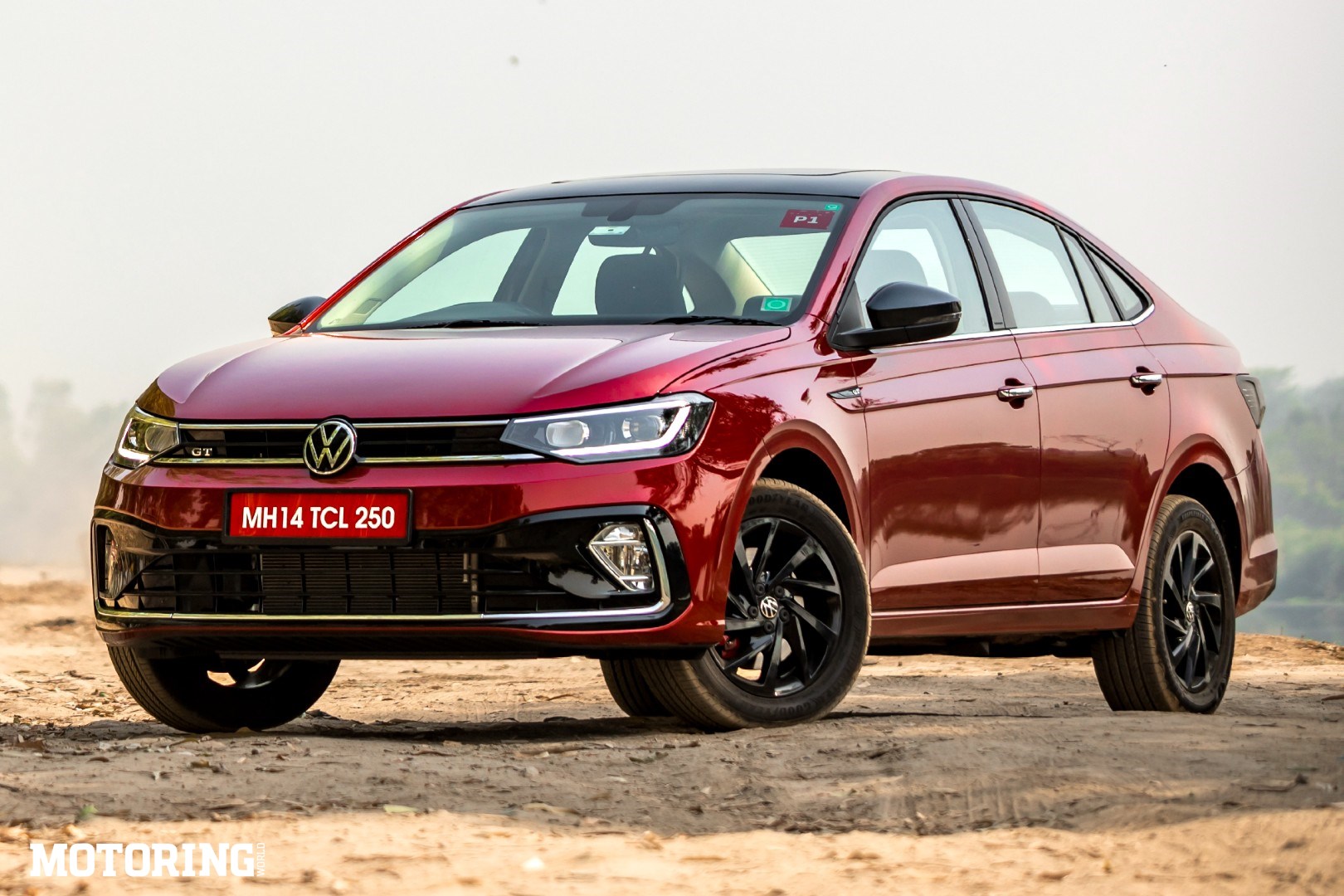 Take one look at the Volkswagen Virtus — the long-awaited answer from the German brand to the Honda City and the Skoda Slavia — and you know VW is serious about making a dent in the midsize-sedan segment. It looks almost nothing like its cousin from Skoda (with which it shares its underpinnings and powertrains), but there is a hint of similarity in the overall silhouette, and the door panels. Most wouldn’t be able to notice these similarities though, and VW has managed to give its new sedan a distinct identity. 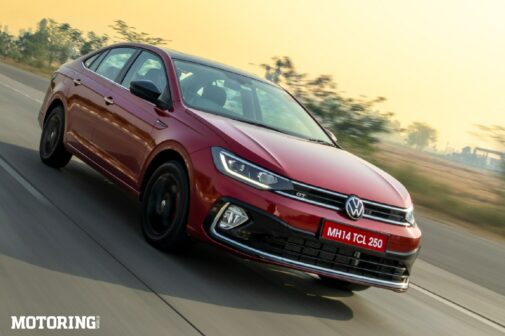 A stretched version of typical VW’s grille and headlight, along with the toothy radiator grille and air dam-like fog light clusters make the Virtus look downright sporty. Despite a minimal front overhang, the bonnet looks long, and the creases enhance the sense of width. The slight forward tilt of the car, and the sexy 16-inch black alloys add to the sporty look, as does the blacked-out boot spoiler. Now, some of these aesthetics are only seen on the Performance Line model, which also gets GT badges, red front brake calipers, and aluminium pedals, and is only available with the 148-bhp 1.5-litre turbo-petrol engine.

However, even the top-of-the-line Virtus Dynamic Line looks sporty enough, despite the silver and black alloys, lack of GT badging, and no boot spoiler. There’s something great going on at VW’s design department, and special kudos to the guys who designed that tail-light. The red LED elements contrast beautifully with the blacked-out glass used, and the parallel line element adds a sense of motion. The sense of occasion you get in more expensive Volkswagen cars can definitely be seen in the Virtus, at least on the outside.

On the inside, it’s a slightly different story. Sure, the 8-inch digital instrument cluster and the 10.1-inch infotainment screen, along with the fiddly touch panels for the climate control, definitely give it a modern vibe. At face value, you see a well-built, and somewhat stylish dashboard, but look a little closer and the grey plastics used seem out of place in this otherwise premium feeling cabin. The roof lining also seems to be better done than on the Taigun, but that you can see the sunroof mechanism when the shade is open is still a bit of an eye sore.

You do have more than enough room to seat five, thanks to the overall width, though the Virtus is better used by four for maximum comfort. The massive 521-litre boot will also be helpful for those who need it. In fact, the seats split and fold (60:40) to make 1050 litres of cargo space, which is quite impressive. Although comfort in the rear seats is good, the front seats are where it’s at in terms of bolstering. It seems like the ventilation function doesn’t work as strongly as in other cars, but we were in Amritsar and the ambient temperature was well above 40 degrees. I’ll reserve my judgement for a less extreme day.

Speaking of the extreme temperature, it was quite confidence inspiring that there was no give in the mechanicals through the heat, and sometimes rough terrain. For the most part, the roads in and around Amritsar are of more than decent quality, but approach some sections that see heavy truck traffic or that cross over a railway line, and the quality deteriorates massively. In either case, the VW Virtus offers a comfy ride. The dampers may even be on a slightly softer setting than the Slavia, but I’ll have to drive them back to back to be sure.

I did notice that the heavier Performance Line model was more stable at high speeds, and had a surer turn-in than the variants with the 1.0-litre engine. The softer setup doesn’t hinder its handling capabilities as far as I could tell, but, again, I’ll have to get VW and Skoda’s midsize sedans together to know for sure. Even the directness of the steering feels rather similar. What this means is that the Virtus is a fun-to-drive car that can go over some pretty bad roads with aplomb. And the engines gel well with the overall sportiness. 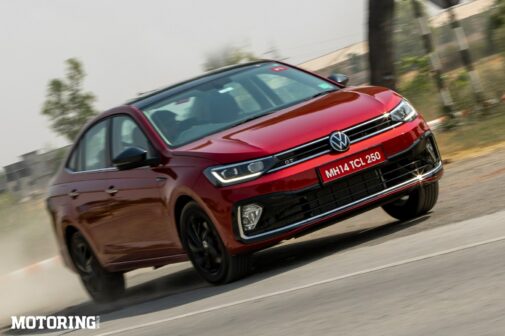 It’s too bad that VW will not offer the 148-bhp Virtus with a manual transmission, and only with the 7-speed dual-clutch automatic. The automatic is superbly calibrated and is a joy to row through in manual mode as well (especially through the petite but firm paddle shifters), but a manual gearbox would have made for a purer experience. I assume the market for people like me just isn’t big enough for VW to invest in it. Sigh. Still, the Virtus 1.5-litre does excite. There’s a strong surge from the four-cylinder engine, and the gearbox shifts through the ratios — up and down — with alacrity.

The Dynamic Line variants come with the 113-bhp 1.0-litre turbo-petrol engine, with manual and automatic gearbox options. The automatic version I drove felt marginally sluggish in comparison, but that’s only because I had driven it after the Virtus Performance Line. There is a bit of hesitation due to turbo lag in constant near-stop-go conditions, but the 6-speed torque convertor compensates for this well from standstill. The 999cc engine is delightfully playful, and the three-pot unit sounds entertaining as its redline approaches. Based on my experience with the Taigun 1.0-litre engine and the manual gearbox, I’d say the Virtus will be even more lively.

At first I was a bit taken aback that the larger engine was delivering better fuel economy at highway speeds than the smaller one. I guess the two-cylinder mode does come in handy here. I’ll need a proper urban drive in them, but I’d hazard that the 1.0-litre Virtus is more frugal than the 1.5-litre model. ARAI’s figures say the 1.5-litre with the dual-clutch is more efficient, at 18.67 kpl, than the 1.0-litre with the auto ‘box, which is said to go 18.12 km on a litre. Both engines do get idle start-stop technology. 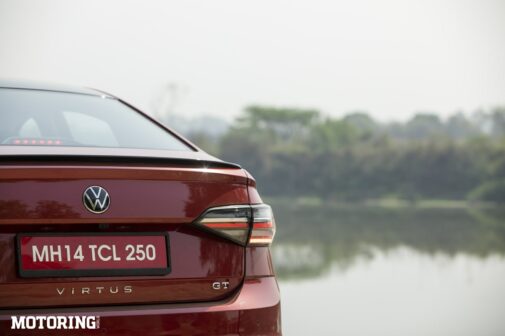 So, it looks like Volkswagen has been true to its DNA and delivered a worthy successor to the Vento. Regardless of the engine or gearbox you pick, you’re going to get an enjoyable, spacious, and comfortable midsize-sedan, one that’ll be quite practical, too. VW will be announcing the prices in June (pre-bookings had opened in March), and we’ll have to see where it stands against the Skoda Slavia (Rs 10.69-17.79 lakh, ex-showroom, India) — which is the new benchmark in this segment — and the venerable Honda City (Rs 11.29-15.28 lakh, ex-showroom, Delhi), which is still going strong and has a new hybrid version out on sale (Rs 19.5 lakh, ex-showroom).