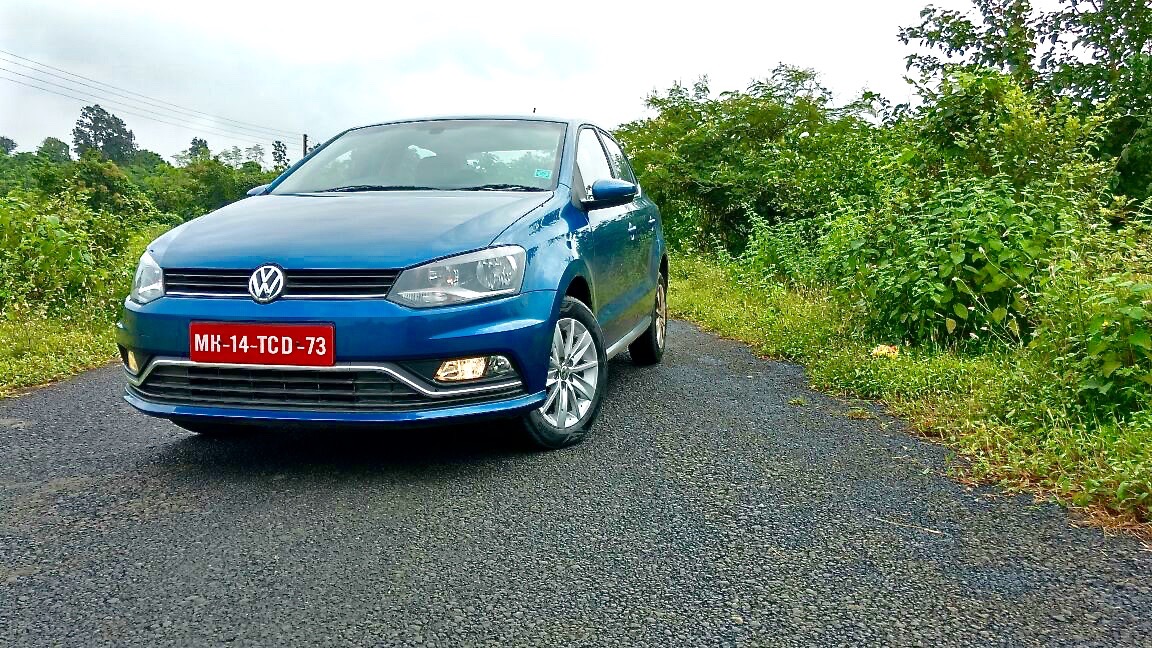 The Volkswagen Ameo diesel is one very quick machine. The centrepiece of this update is that lovely 1.5-litre diesel engine that puts out 109 bhp and 25.4 kgm, which allows this tiny car to be a pretty quick machine. Volkswagen will give you the option of a 7-speed DSG ‘box or a 5-speed manual transmission to handle all that power, and it gave us an ample amount of time to sample both.

So how does it drive? It’s very, very impressive. The manual ‘box is easy to row through and while there may be a bit of noise when you start the car, from there on it’s so much fun to live with. Thanks to some really well thought-out gear ratios and a narrow powerband – even for a diesel – the Ameo diesel just sails past pretty much everything on the road. If you keep it smack in the middle of the rev range, you won’t have any problems with lag, either, and you’ll be astonished to see how quickly this little thing manages to hit 100 kph. It’s the same with the DSG: keep it in D and it’s superb to drive around in town and negotiate traffic. Slot it into S, though, and things just liven up considerably. Everything’s more eager, and while the ECU’s been programmed to hit the rev-limiter before it shifts up, which isn’t ideal, it still feels plenty quick. If you prefer more control, there’s a semi-manual mode that you can activate by slotting the gearlever to the left of the D mode, and it’s quick to manage your needs and expectations. I realise I’ve probably said the words ‘quick’ and ‘fast’ a few too many times, but have a go in one of them yourself and see if you concur.

What stops it from being an out-and-out quick car is the fact that the steering still feels about as vague as an alcoholic’s explanation of the theory of relativity, which is a shame. With the amount of power it has on tap, you’re expecting it to be reassuring when you take corners a bit enthusiastically. The ride, too, is a bit on the firmer side, and that’s a good thing when you’re going quick, but it’s not so great when you’re at crawling speeds. Other than that, the Ameo feels solidly built, and surprisingly stable at not-so-sane speeds, so that’s a big plus.

What isn’t, and I believe this is kind of a stumbling block, is the fact that the Ameo just feels like Volkswagen could have put just a little more thought into it. There’s absolutely nothing to distinguish it from the regular petrol variant, except for a small TDI badge on the bumper. Nothing to point towards its rather speedy credentials. The rear styling is a bit of a downer, if I’m honest, but I suppose the more you look at it, the more acceptable it gets. The interior is where things really get a bit trying, though. It’s a solid, conventional layout that’s easy to live with, but it’s just getting a little too staid at this point, especially when you look at what the competitors are upto. I wouldn’t go so far as to suggest that it’s a deal-breaker, but it is something that you should factor in before you take the plunge. What helps is that the fit and finish is excellent and you also get a touchscreen for the infotainment, a rear-view camera, automatic wipers, cornering lamps, cruise control, two airbags and ABS. The DSG also gets ESC and a hill hold function, which makes it a pretty well-equipped car, thankfully.

What all this adds up to is a car that shows a fair bit of promise with a few negative aspects to contend with. Then again, most of the cars in the compact sedan segment have a list of negatives as big, if not bigger than the Ameo. Where the Ameo gets a nice shot in the arm is the pricing. It’s pretty competitive if you discount the DSG variant. Prices start from Rs 6.33 lakh and swell up to Rs 9.21 lakh (ex-showroom, Delhi), which makes it worthy of your attention, surely. What’s it going to be, then?