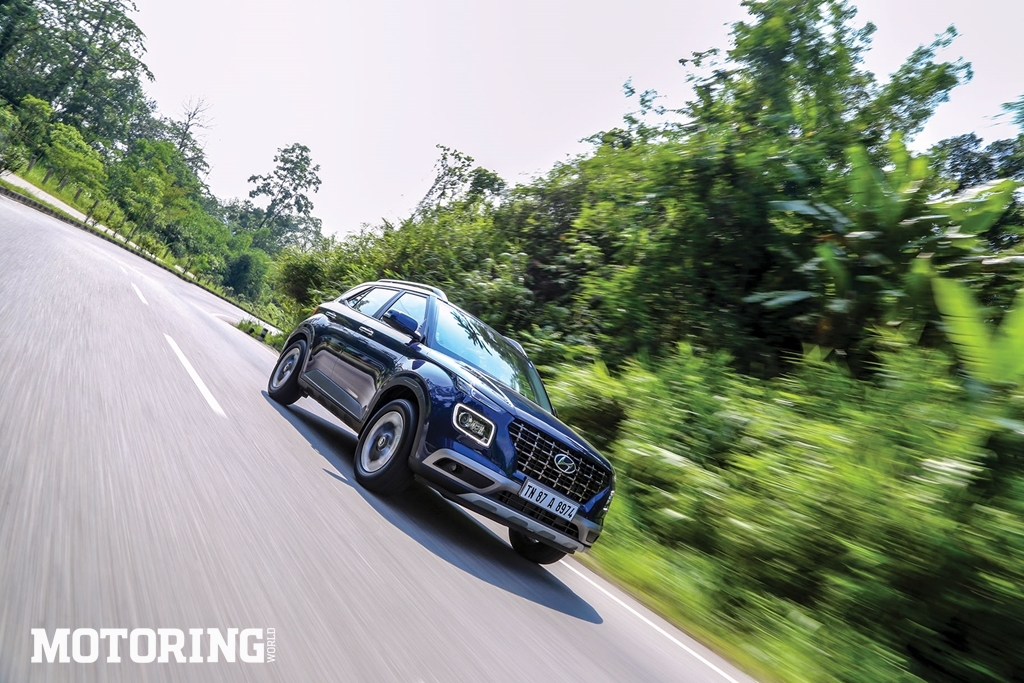 See the gaping chasm there? Hyundai does. It’s probably been asking itself what it’s been doing all this while, as the Brezza, the Nexon and the Ecosport have all stolen a march on it, in a segment that’s been reporting some rather grotesque growth figures over the years. Don’t feel too bad for the country’s second-largest car manufacturer, though. It’s been doing ruddy well all this while. Ever the opportunists, though, Hyundai now has an answer to the question, ‘Is there an SUV I can fit into my pocket?’, and I think it’s answered it quite emphatically.

This here is what Hyundai calls the Venue, and I think it’s a slam dunk. Not the name, mind. That could do with a bit of, um, complete eradication. Also, that grille is a bit much. Sure, it helps, when you’re looking at it head-on, give the Venue a rather bold, daring face. And I get the need for that in a car that’s, for all intents and purposes, small for an SUV, but I still feel it’s overkill. Should make for a fine deathbed for highway insect roadkill, though. 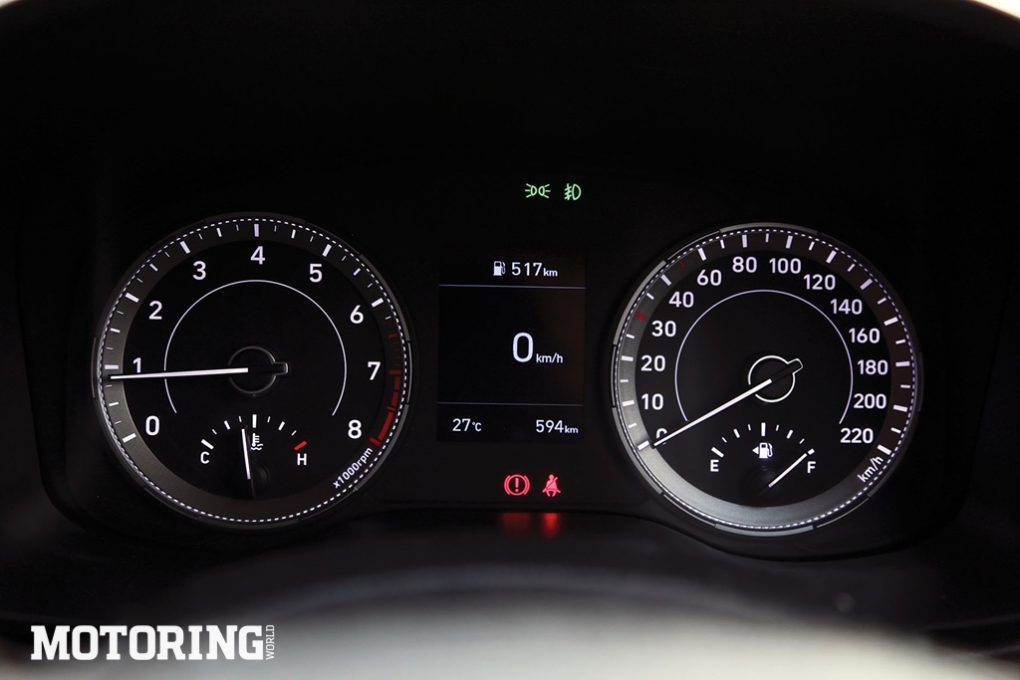 Anyway, those are my biggest gripes with the Venue. Let that sink in. If a person whose job it is to review cars like the Venue has only two issues with a car (both of which are nothing more than a slap on the wrist. I could probably even see myself getting used to the name. Venue. Yeah, I think it’s already happening…), it’s an excellent assessment of just how far Hyundai’s raised the bar with this little one.

I like the unconventional spot for the headlamps, the thin slits for the turn indicators above it, the decisive roofline, the almost Creta-esque silhouette, and that wonderfully crafted rear. On the media drive, I’d gotten split reviews about the tail-lamps, but for what it’s worth, I think they’re really cool. In the flesh, the sub-4-metre subcompact Venue looks a lot smaller than it should be, but that hardly translates to no presence on the road. Thanks to the way Hyundai’s designed it, there’s no mistaking it on the road. It’s not as stand-out as the Nexon in the flesh, but it’s far from something you’ll forget in a huff. 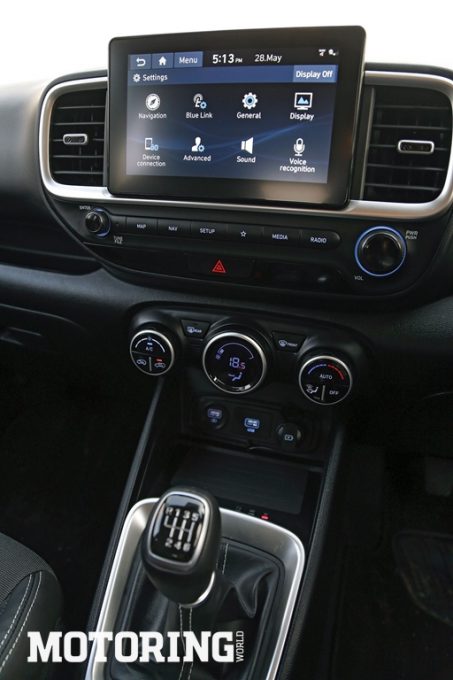 It’s similar once you step into the cabin. There’s nothing remarkable about the Venue’s cabin, but it’s seriously a nice place to spend some time in. The car I was in had a predominantly black theme to the dashboard, with an 8-inch touchscreen smack bang in the centre to break the cooling vents. One thing you can feel very satisfied about is the fit and finish levels. All the buttons, the controls, the touch and feel of the dash itself, they all ooze quality. The touchscreen itself is stupidly simple to use, it’s got a great UI and the touch sensitivity is just right. Do I wish the screen were bigger? Sure, why not. 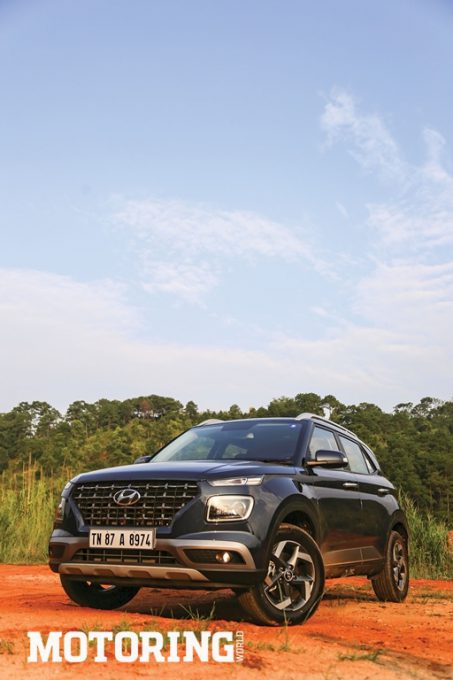 Especially since it’s not out of the ordinary nowadays. But it’s entirely workable, this 8-inch one. As for the front seats, well, they’re nice and comfortable. I’m an inch shy of six feet tall and I had no issues getting comfortable on our near-200 km drive. I’d even go so far as to say that it holds you in surprisingly well when you’re down for a spot of the fast and twisty stuff. The steering’s adjustable for rake and reach, thank God for that, and the height adjust on the driver’s seat is adequate. I did wonder why the seats didn’t get electric adjustment, but I suppose that would have driven the cost up considerably. As for the rear, you’ll struggle to fit three in there, especially on longer trips. This is despite Hyundai making the floor flat and having the seat bottom at a constant level right across its breadth to accommodate three aside. Stick to two people, then. Legroom is adequate with the seat in front adjusted to my preference, with a couple inches to spare before hitting the front seatback. Headroom, though, isn’t the most extravagant. I’m fairly certain I’d bump my head over a particularly bad speedbreaker (or, as we call it in Bombay: a speedbreaker). Overall, you’re not going to be overwhelmed by space in the Venue’s cabin, but it’s far from cramped, either. Sufficient for daily runabouts and the odd long-ish trip out of town, honestly. And when you do, the Venue’s boot space will come in handy. There’s 350-litres of it to exploit, which is decent for a car this size. 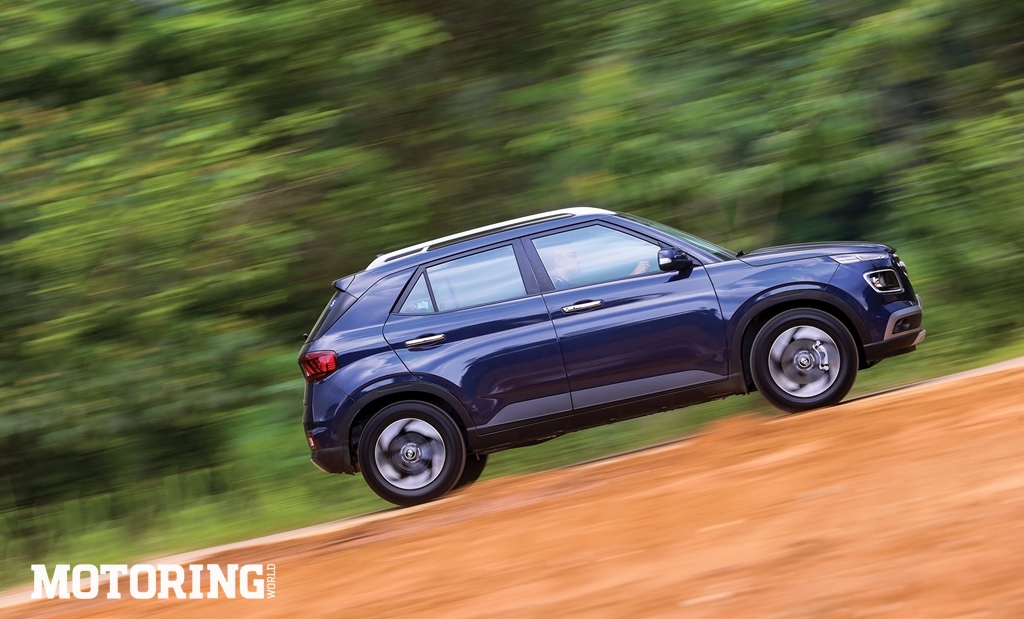 Something that I haven’t touched on already is just how well-specced the Venue I was driving was. Typical of Hyundai, the Venue doesn’t skimp on features. The top variants come with six airbags, ABS with EBD and brake assist, ESP, hill-start assist, speed-sensing door locks, a sunroof, wireless phone charging, projector headlamps with DRLs, cornering lamps, cruise control, Apple CarPlay and Android Auto connectivity, and before this starts to sound like a brochure, I’ll stop. The list goes on long, really. 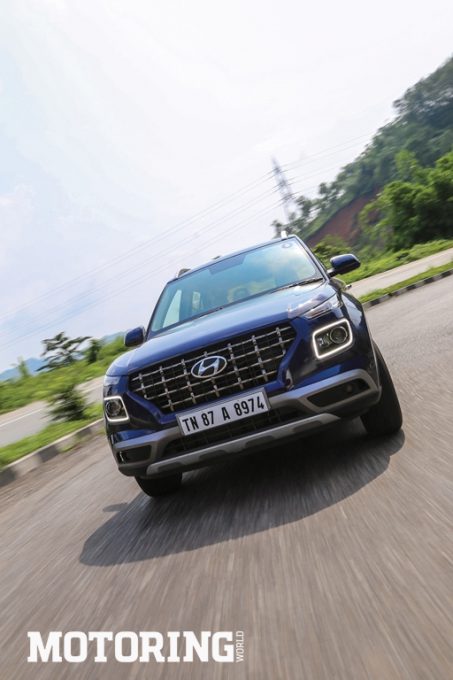 Perhaps the most interesting part of this story (to me, at least), however, is what powers this little subcompact from Hyundai. The Venue I was driving had a 998cc, inline-three direct-injection turbo humming along under the hood. If you’re anything like me, the idea of an inline-three in a car sounds about as exciting as a conference on palaeontology would to a teenager. Unless, well, the teen in question has an affinity for animals with tiny forearms and an inability to withstand a meteor strike. In which case that parallel went to waste. Oh well, one tries…

Obviously, then, the Venue’s 1.0-litre wasn’t meant to wow, right? Let’s put it this way: technological advancements have come along fairly nicely. The things you normally associate with a three-cylinder engine just aren’t there. The car’s not vibey at idle, it doesn’t feel choked the moment you cross a threshold on the rev counter, and the best part is (and I can’t stress this enough), it sounds good. There’s a nice, throaty ring to it when you rev it hard, and at other times across the rev range, the 1.0-litre does very well, too. The turbo effect was something I thought would negate any semblance of good driving dynamics the Venue might have had, but I was wrong. Roughly 1500 rpm onward, the Venue is on boost, and so very driveable and likeable thereafter. It’s not even like it’s a pain below 1500 revs, either. Hyundai’s really cracked this one. The engine will get you to 100 kph quickly, but don’t expect too much out of it. Its rivals are a fair bit faster. But the Venue’s eagerness is readily apparent all through, and that’s something that’s a delight to live with, especially in traffic. Definitely one of the best inline-threes I’ve driven. 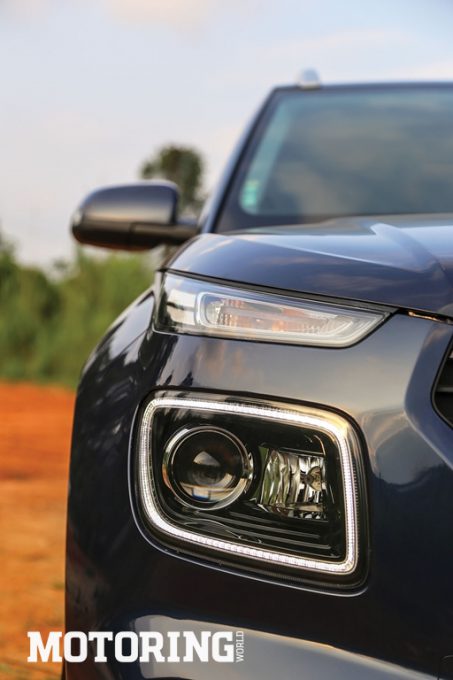 Now, the Venue I was driving had the six-speed manual transmission in it, which, honestly, you just can’t complain about. Short throws, readily apparent slots, and absolutely no vagueness to the shifts ensure that it’s a lovely thing to have in traffic or out on the highway. Colour me impressed. The clutch action wasn’t too bad, either. I was hoping the Creta’s notoriously heavy clutch wouldn’t find its way in the Venue, but Hyundai seems to have worked on this, so what you get is a rather nice thing to play with. This was par for course, though. What I was really looking forward to, though, was the 7-speed dual-clutch transmission, and let me tell you this: it isn’t what you would expect. When you hear dual-clutch, you think the shifts will be lightning quick and that Volkswagen’s DSG will be a thing to mock. Well… partly. The Venue’s DCT is good, no doubt, but it’s not especially good if you’re in a hurry. The shift speed is above average, but it’ll hardly enthuse someone into going faster is the point I’m trying to make. At the end of it, though, I had to remind myself what the Venue’s purpose is, and since it will primarily be restricted to duties within the city and the occasional highway jaunt, the DCT will be perfectly adequate.

All said and done, there’s no way to hide it: the Venue will be hard to ignore. It’s got a great baseline, some terrific features, it looks swell, and the prices and infrastructure that Hyundai’s built serves as the fillip for a brilliant car. Hyundai, you’ve done good. 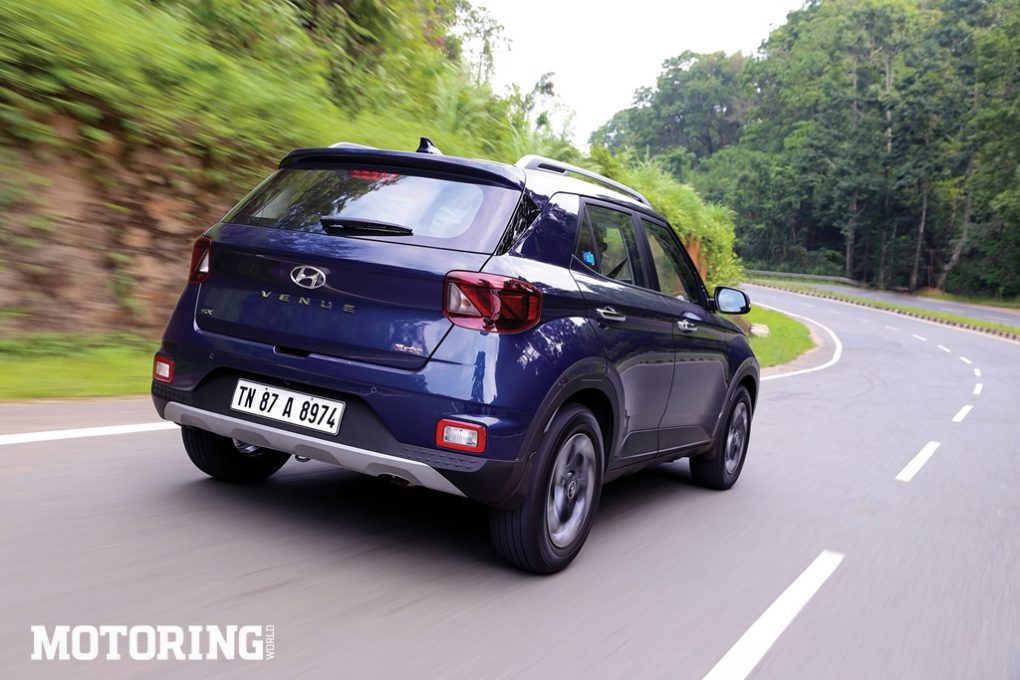