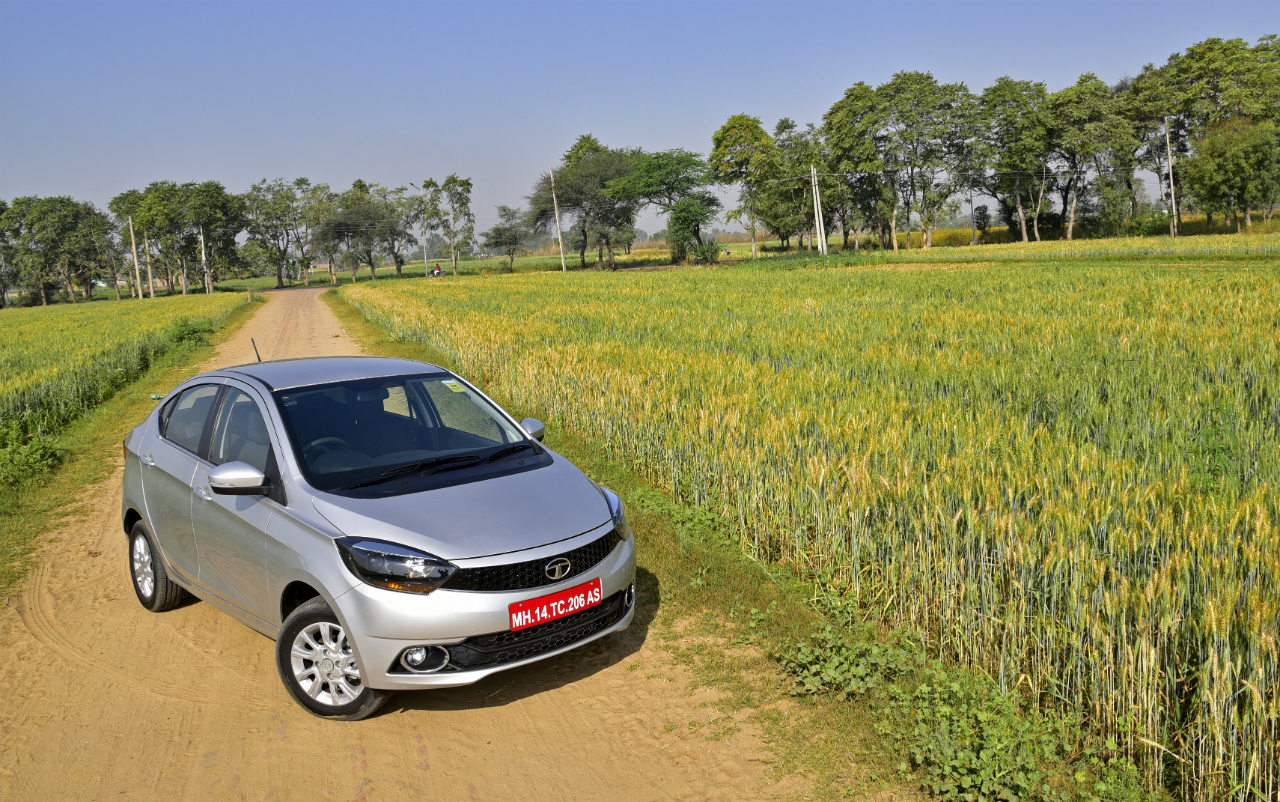 Eight millimetres. I’m fairly certain that this measurement of length never crosses your mind in day-to-day life. And yet, for Indian car manufacturers, a few millimetres make all the difference in the world especially when it comes to the segment that is uniquely Indian in its existence – sub-four-metre cars. Take the new Tata Tigor for example; that’s the number by which it undercuts the limit on overall length to make cars cheaper for manufacturers to sell and for customers to buy. Quite typically, the logic of the rule may or may not be sound, but the current benefits of sticking to it are substantial enough for manufacturers to shower serious attention on it. And if it turns out more cars like the Tigor, it might not be an entirely pointless exercise.

The Tigor looks smashing; it’s easily the best-looking car in this segment of legislatively-truncated backsides, though it’ll take attention away from many cars in higher segments, too. For what is essentially a boot-ed Tiago, the Tigor makes excellent use of the extra metal on its rear, especially considering the constraints on its length. The rear is a bit reminiscent of posteriors with flying propellers stuck onto them, but that’s no bad thing at all, especially since the Tigor manages to look better than a good number of said inspirations. Indeed, its boot is the whole point of the Tigor’s existence and it would’ve been very easy for Tata to add a simple luggage-carrying suffix to the existing Tiago. However, the emphasis on ‘designing’ a boot rather than simply ‘engineering’ one shows how serious Tata is about the path its chosen. Tata has chosen to call it the ‘styleback’ and for once I can’t disagree with a marketing-derived addition to auto-jargon.

The rest of the car is pretty much similar to the Tiago, save for a few minor details, but the overall effect is strikingly different to the already good-looking hatchback. The interior is again a carry-forward from the Tiago; it remains as feature-loaded as before with the addition of an updated  infotainment system. The quality of materials and finishes inside the Tigor is as good, if not better, than its rivals. Nothing to complain about here. And that continues when you go over bumps, too.

The Tigor presents its occupants with a very mature ride quality and good stability at all speeds. Given its compact dimensions, the way it absorbs bumps is commendable; provided your speed is suitable, undulations don’t throw it around like a pinball and it continues on its path with only a few muffled thumps filtering through to the cabin. Tata says the suspension has been ‘tweaked to provide a more sedan-like driving experience’ which can certainly be felt in the way the Tigor goes about its business on our roads. It just feels more assured than the Tiago, which is also probably due to the added weight and the consequent retuned suspension.

This added composure, whether it is because of the increased heft or the reworked suspension, also helps the Tigor feel more balanced when you’re throwing it around with misplaced enthusiasm. The steering is light and quick enough to hustle the Tigor around bends and traffic alike in a satisfying manner. And to control top-speed manoeuvres in reverse while performing multiple pan-shot runs for perfectionist photographers.

Now for the Tigor’s engines; it comes with two options, a 1047cc/69-bhp diesel  and a 1199cc/83.8-bhp petrol, both governed by a 5-speed gearbox each. It is extremely evident that both motors have been tuned for urban driveability and fuel efficiency, and both motors are suited for the intended application. The diesel promises phenomenal kpl figures, though it obviously isn’t as refined as the petrol motor that’s my choice of the pair. The diesel shifts along decently enough, though outright performance isn’t its cup of tea.

The petrol, though, is a motor I’ve spent several months with in the Tiago, and it continues to get the job done in a fun manner. It still revs hard, though not as quick as some of its competition, and enables the Tigor to put a big smile on the driver’s face and a look of moderate concern on the passengers’ faces. I’m sure that both variants are a bit slower than the Tiago owing to the extra weight, but it’s really nothing that you notice while driving in the real world. In fact, I’d take the Tigor’s added stability over a negligible performance advantage every single day of the week.

To sum things up, the Tigor is an extremely tempting proposition for people who are looking for a hatchback with a boot. And with the way it looks, it should have little trouble drawing people into Tata showrooms. Oh, I almost forgot to mention the climate control system and the music system; both are extremely important features for me in daily life and I have to say both are excellent in the Tigor. And, oh again, the boot is 419 litres in volume, not something to take lightly at all. However, everything depends on the price; Tata will announce the Tigor’s pricing on the 29th of March and that will determine how well or not it’s received. If the Tiago’s price tag is anything to go by, I expect a competitive number to be stuck on the Tigor – Rs 50,000 for each trim level over the Tiago would be a fair amount, I’d suppose. Four metres and all.