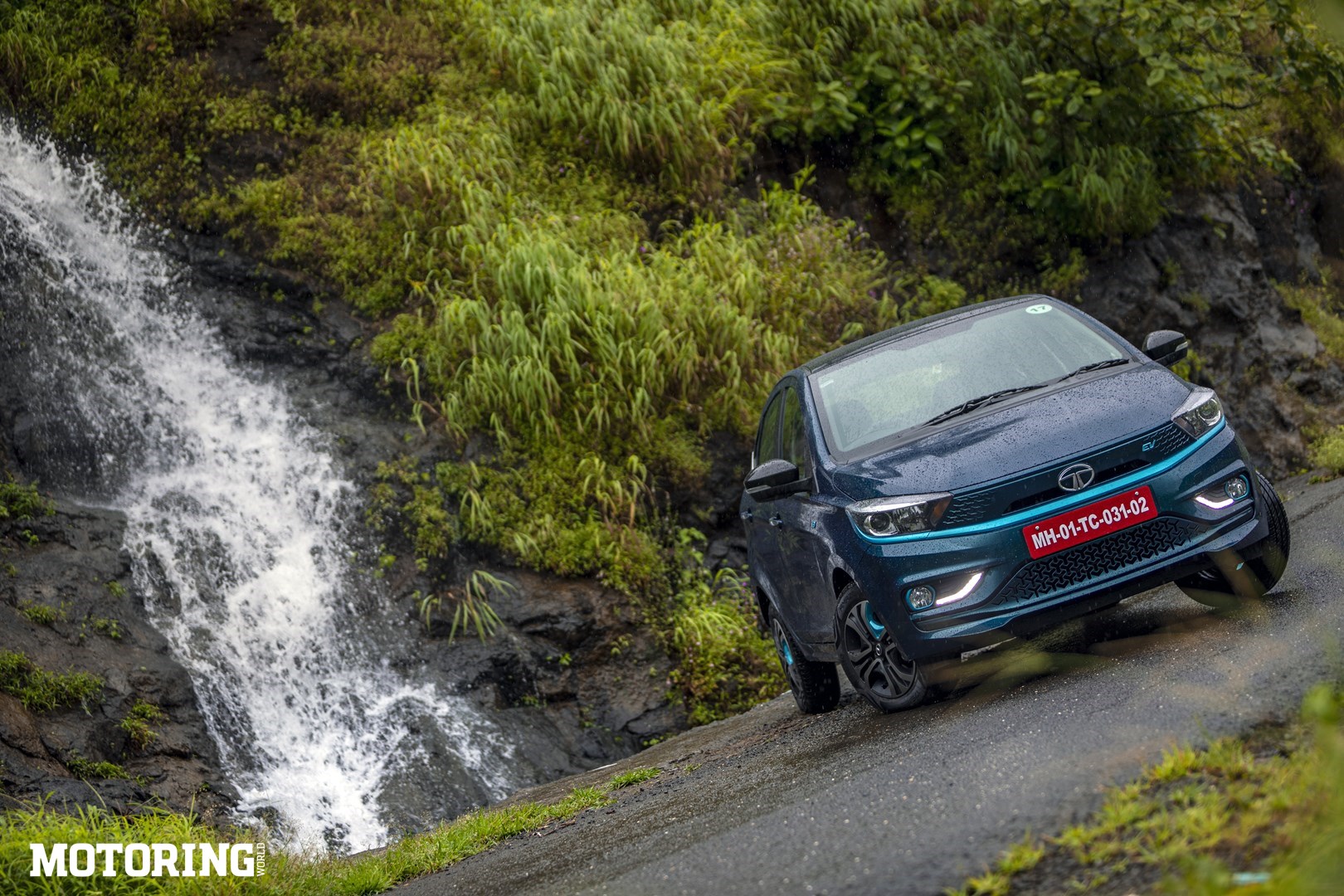 The Tata Tigor EV is the most affordable all-electric car on sale. While its starting price is Rs 2 lakh lower than the Nexon EV’s, at Rs 11.99 lakh, ex-showroom, India, it’s not exactly cheap. In fact, the Tigor EV range starts over Rs 4 lakh higher than the top-spec petrol-powered Tigor with the AMT gearbox, which is not an insignificant amount. Not to mention the top-of-the-line Tigor EV you see here costs Rs 13.14 lakh. Then again, you do get more equipment and performance for your money, unique styling elements and the feeling that you’re contributing to a greener tomorrow.

You’ll be able to tell the Tigor EV apart from its petrol counterpart with relative ease, at least from the front. Tata’s ‘humanity line’ grille element gets a proper makeover, there’s blue highlights around the fog light clusters and a prominent EV badge beside the Tata logo on the grille. Other than the EV badge on the front fender and the new alloy wheels (with appropriate blue highlights), there isn’t much to separate the EV from the petrol Tigor for the side. Speaking of the wheels, these 14-inch rims do look a bit small for the car. The standard top-spec Tigor’s 15-inch alloys better fill out those wheel wells. Around the back, again, it’s just a few badges and a blue highlight on the rear bumper denoting that this is the all-electric model. The Teal Blue colour is exclusive to the EV version of the Tata Tigor though there’s a Daytona Grey colour option available too.

Those who have compact SUV or mid-size sedan money to spend and are looking to have the moral high ground when talking about their mode of transport. While you do get a relatively smaller car, the Tigor is a spacious enough car. You’re generally sat quite high up, regardless of the seat you’re in, which does hamper headroom for taller passengers, especially at the rear. Nonetheless, shoulder and legroom is more than adequate for four passengers and because the seats are placed higher and the glass area is rather large, you don’t feel cramped.

Although the features list on the entry-level XE variant of the Tata Tigor EV is on the shorter side, the top-spec XZ+ Dual Tone variant I drove is decently equipped. Some highlights include a simple but easy-to-use 7.0-inch touchscreen infotainment system, an excellent eight-speaker Harman audio system, steering-mounted controls, automatic climate control, a height adjustable driver’s seat, keyless entry and go, a cooled glovebox, power-operated wing mirrors, and an electric boot release. Tata also offers its iRA connected car tech which includes vehicle diagnostics, finding a charger, geo-fencing and remote commands. The one feature I feel that would have completed the package though is a front centre armrest.

Beyond the Tigor EV’s green credentials, what will also give you bragging rights is its four-star crash test rating from Global NCAP. Safety kit isn’t stellar but, again, it is more than sufficient in this range-topping trim. Two airbags, ABS with EBD and corner stability control, a rear parking camera, follow-me-home headlights, fog lights, and a rear defogger are available. Customers can opt to forgo the spare tyre as a tyre repair kit is offered on all variants. This would increase boot space from 316 litres to 370 litres. Like the Nexon EV, the Tigor EV’s IP67-rated battery pack also has an AIS-048 rating against nail penetration, crushing, overcharging and electric shock.

Well….. yes and no. Unlike the Nexon EV, the Tigor EV’s battery pack is split — one part is placed where the fuel tank would be in the petrol version and part of it is in the boot, which explains why the Tigor EV’s boot is 49-103 litres smaller than the Tigor’s. This means that Tata’s all-electric compact sedan doesn’t have the neat 50:50 weight distribution that makes the Nexon EV such a neutral handler. The Tigor EV understeers at the limit, but driven at eight-tenths of its potential, there is a bit of fun to be had. Despite the lack of feel, the weighty steering lends confidence while making quick turns and the body feels taut. The suspension doesn’t bog down either, which is commendable considering the extra weight it’s carrying.

In fact, there is a satisfying heft to the Tigor EV (it weighs just over 200 kg more than the Tigor AMT), which does make the car feel planted and ride in a manner seen in cars above its segment. Ride quality is superb for its size, it stands 2mm higher than the standard Tigor, and even the 14-inch rims with higher profile tyres help round off sharper creases in the road. As is usually the case with electric cars, there is a slight uncertainty around where the brake pedal bites down properly, but the Tigor EV’s disc-drum setup sheds speed fairly quickly when it needs to.

In terms of outright speed, the Tigor EV is not that fast; Tata has limited the top speed to 120 kph (it shows 122 kph on the simple but clear digital instrument cluster). However, as all the 17.33 kgm of torque generated by the electric motor is available from 0 rpm, it is quite quick. 60 kph comes up in a claimed 5.7 seconds and 100 kph doesn’t take much longer. It really doesn’t take much to reach the car’s limited top speed, at least in Sport mode. The standard Drive mode does place limits on how much power and torque are sent to the wheels, significantly altering the acceleration. However, for pottering around in the city, the Drive mode is satisfactory.

Despite the 10-bhp deficit the EV has compared to the petrol Tigor, the significant 5.81-kgm difference in torque is quite telling. The Tigor EV is far quicker than its petrol counterpart, which is great as the gruff and meak powertrain is the Tigor’s weakest link. There are a couple of points to note though. As the torque comes in all at once, it overwhelms the low rolling resistance tyres quite easily. And repeated bursts of acceleration will deplete the 26-kWh battery far quicker than sedate driving would. 306 km is the ARAI-rated range, but based on our drive, expect 200 km in the real world.

Simply put, yes. It may not have that mechanical feel and sound that so enamours car enthusiasts, but give it a go around a set of bends (remember at eight-tenths, not more) and the Tigor EV is capable of putting a smile on your face. There’s a surety at high speeds that is several classes above and the low-speed ride is also downright luxurious for its size. Although I will remain a conservative petrolhead until the end of my days, I have to admit the shove that I get from an electric car — courtesy the instant torque — is something that I can get addicted to. All in all, the Tata Tigor EV is a mildly fun, decently equipped, and comfortable car, which can be plugged in for 65 minutes at a fast charger to fill up the battery to 80 per cent. The all-electric version of the Tigor definitely feels like an evolution over the petrol model and is not a bad choice if you’d like to be a trend-setter by getting an EV early, and at a relatively affordable price. 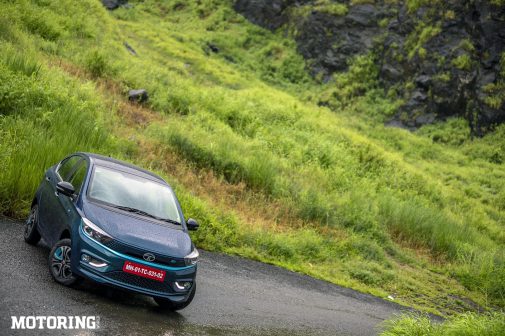