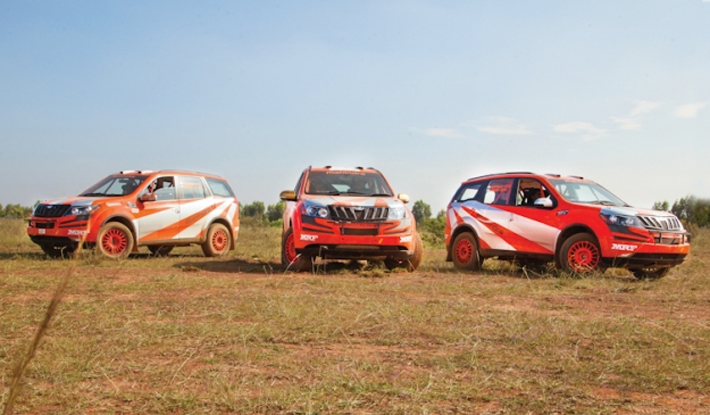 The collective lull from the crowd is interrupted by a spike of anticipation, as the last car primes itself behind the starting line. It’s the inaugural Super Special stage at the 40th K1000 Rally of Bangalore — a closed circuit with narrow pathways curled up to form a hairpin-heavy track. Think Supercross, only smaller and completely flat.

There’s a reason why the car’s driver, Gaurav Gill, commands such attention. His recent APRC title may have gone a long way in foregrounding his formidable talent, but out there, awash under the gaze of bright swivelling LEDs, it’s his bizarre relationship with gravity and speed which has propelled him to showstopper status. The fact that Gill has won four out of the six rallies on the IRC 2014 calendar, in a bright orange two-tonne Mahindra XUV5oo, makes him an even more curious phenomenon than a  cartwheeling giraffe.

Gill is part of a trio of racers cherry picked from the highest echelons of Indian rallying to race for the Mahindra Adventure rally team. Flanking Gill is rally raid champion Sunny Sidhu (another big draw for the crowd) and the most recent entrant — former IRC 2000 (cc) winner Amittrajit Ghosh. Although not officially classified for the INRC in its debut season in 2013, the team has been at the forefront of nearly every rally it has participated in. Days after the K1000 dust has settled, I find myself inadequately filling the big bucket seat of the Super XUV at a testing stage somewhere in Bangalore’s agricultural periphery — a belt that previously served as a K1000 stage before the rally moved to the India Mines iron ore motherlode.
The XUV’s unique shade of orange stands about 87 shades brighter than that of the terrain, and the neighbouring silver stripes hugging its frame suggest that this is the new and improved S nuper XUV, freshly homologated and tailored to fit the Group N jacket, still blushing from its first official IRC title. Although it’s thrown about and yumped in the same devil-may-care fashion as it was last year, Group N homologation significantly curtails the modifications allowed to be installed in the machine. This meant more tinkering and squinting for N Leelakrishnan and his team at Red Rooster Performance Racing, Mahindra’s official tuning partner, whose ingenuity has kept things on an even keel.
All strapped in now, the stock 2.2-litre turbo-diesel engine’s rumble kills the pervading silence. By all accounts, this is the anti-XUV — gone is the sobriety of its colour scheme, and the trappings of an urban-offroader; the car is stripped down to a manic, psychedelic spectre of its real self. I head off into a narrow pathway for a preliminary run, closely flanked by trees and bushes, flooded simultaneously adrenaline and a week-old memory of sitting a few inches left of the spot I currently occupy.
Sunny Sidhu, cool as a popsicle, is going flat out during a pre-rally test run, with the invaluable aid of my right foot tapping a floor mounted button that sprays water onto the now top-mounted intercooler. As Sunny blazes in over foot deep undulations, I sit perpetually frozen with my eyes firmly fixed on him, not sparing a second to blink, in the hope that osmosis will allow me to be just about rally-ready by the end of his test run.

No such luck. Flash forward to present day, with one hand firmly gripping the custom OMP steering to counter the wild torque steer, I’m shifting quickly to build up speed, getting more than I bargained for, then braking lightly before taking the narrow left and a very conventional about turn that contrasted heavily with Sunny’s swift handbrake turn. He then promptly flashed a grin, tap-dancing his way through a 90- degree right hander. You could have a career in international espionage or lion taming, but you’ll never be as cool as Sunny Sidhu.
The Super XUV charges towards another right-hander, with a greater run-off area, as I cut hard across the apex, the front-wheel driven behemoth hungrily darting ahead with complete disregard for basic physics. For a car this high, there’s surprisingly little body roll, thanks to the three-way adjustable Reiger suspension units installed. The car limps sideways before powering down a longer, more uneven strip of gravel as I gauge its agility with a little more throttle input. Faster now, with lighter braking, the XUV is allowed greater leeway in the presence of a wider field and, surely enough, breaks traction. However, it doesn’t do so with the topple-happy dynamics of a regular SUV — it slides out almost delicately, and with adequate steering input, slides back in with remarkable ease, having shrunken itself around me to large hatchback proportions.
This exercise has gone from intimidating to extreme fun in a very short span, but the technique is way off. With Gaurav and the gang, steering input is brought down to absolute minimal levels, and the car is manoeuvred largely through left-foot braking and throttle input. It’s a craft that allows Gill to power-slide a monstrous front-wheel drive SUV across the Kari Speedway tarmac, and it works marvellously in the gravel, Gaurav’s fine tuned senses determining the car’s line almost telekinetically. I try to commit his elaborate footwork to my wholly nonexistent photographic memory, failing which I contend myself with the fresh wall of dust that is built in my wake.
Quite a lot has changed, apart from the colour scheme. The challenge for the Red Rooster team was to maintain or, ideally, exceed the power levels the car possessed last year. Having to fit into the Group N regulations straightjacket meant removing the previously installed Race Dynamics tuning box. This in turn required the ECU to be remapped, in order to allow for a greater air/fuel mix and increase the boost. Though the car’s standard smoke and torque limiters have been removed, the ECU must allow for more power in order to compensate for the lack of a tuning box and the added weight brought in by the removal of any fiberglass components. So the car is aided by 5-6 extra horses this year, the total count adding up to 156-160 bhp, the specific amount varying marginally from time to time.
Even the previously front-mounted intercooler has been traded in for a stock, front-mounted one. However, given its inadequacy in cooling the hot turbo gases, two top-mounted nozzles were installed to spray water onto the intercooler through a manually operated button. With staccato inputs from the navigator, this can bring the temperatures down by 5-6 degrees — the cooler the air, the faster  the car.

Evidently, whatever the boffins at Red Rooster Performance did, it’s worked because Mahindra Adventure and its tuner swept the podium at the K1000 rally — their latest victory allowing them to win the Championship. It’s an unfamiliar sight, watching a rectangular metallic juggernaut carry significantly greater speeds than the Cedias, the Polos and (good heavens!) even Lancer EVOs, but between Gill, Sidhu and Ghosh, few appeared quicker. Which is saying something, because structurally, anti-roll bars and all, big, rectangular juggernauts aren’t ideal rallying weapons. While a background in rally-raids makes rallyists like Sunny Sidhu more prepared for such a venture, it’s not the same for Gill. For an internationally renowned rallyist like Gill, with a roster of rally cars that have placed him much lower and closer to terra firma, this  is unusual.
Gill admits that switching between his APRC-prepped Skoda Fabia and the XUV requires a complete recalibration of his instincts. A history of fast, light and low-slung hatchbacks and sedans is instantly shelved, as he acclimates himself to the more cumbersome attributes of the XUV. Having dominated the IRC 2000 category for the better part of the noughties, there wasn’t a lot else in the Indian Rallying circuit that could challenge or surprise Gill — until Mahindra Adventure came calling in 2013. The upside is that two rallying seasons in, the XUV has whet Gill’s appetite for the legendary Dakar rally. ‘I’m ready to go right now,’ says Gill, beaming, when pressed about a possible date for his  next rodeo.
For the uninitiated, it’s a box of chocolates, the Super XUV — you wouldn’t think you’re carrying serious speed, but it’s all there. Its bulk demands your undivided attention if it’s to be driven to the limit — a task only the Mahindra Adventure trio can pull off with the kind of consistency required to win championships. It can be remarkably precise in a tight squeeze, and it can also be a bit wayward when pushed hard, all that torque steer giving it the focus of a bull with ADD. Having had an entire afternoon to give that throttle-steer technique a shot, I’d made some headway with it, remarking upon the precision required to steer it into swift turns.

It’s the first diesel SUV to win the IRC, but something suggests Mahindra’s just getting started. It’s uncertain just how many rallies lie ahead, or whether Dakar’s one of them, but if reality and the laws of physics have proved no obstacle yet, not much else will.