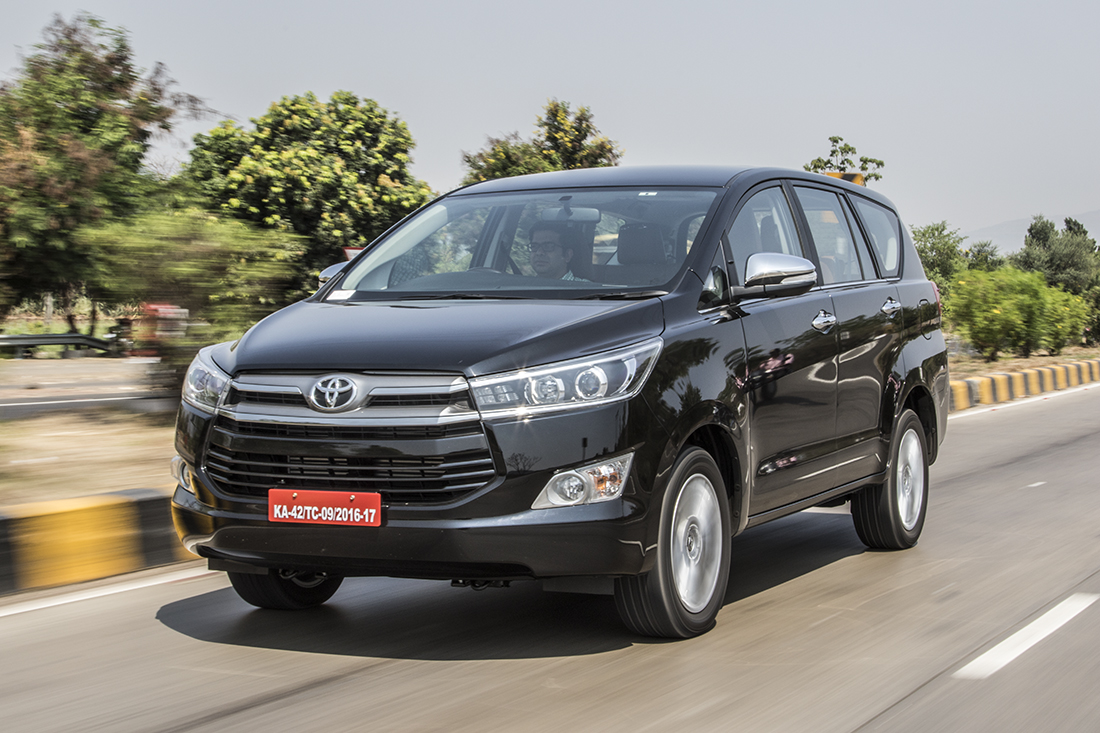 ‘India moves in an Innova’. Do we argue with that statement? I don’t think so. Then again, ‘when it ain’t broke, don’t fix it’ – that too holds true for the Innova. Eleven years have passed since Toyota decided to replace the Qualis with its then-new MPV. The market was initially hesitant. It thought the Innova was a bit ‘too plush’ and didn’t quite bite into the MPV experience. The initial days were tough; customers even clamoured for the Qualis to be brought back. A year later, though, the situation had calmed down and the Innova had started to climb on the sales charts and it never looked back again.

Its strengths – tough build quality, comfortable seating, bombproof motor, sorted dynamics and Toyota’s legendary after-sales service and residual value worked in its favour. The competition either lacked in some or all of these traits and never really made a dent in its fortunes. With the exception of the Maruti Suzuki Ertiga (and it sits at the other end of the spectrum), no true-blue MPV has managed to shake the king off its throne. And it seems like the new Innova might be on just such a course yet again.

… AND HAS A CHANGE OF HEART!

The second-generation Innova builds on the success of the first, but improves on key areas its predecessor lacked in. First up, the Innova gets more potent motors; so potent, in fact, that it leaves the competition way behind, at least on paper. Two new motors – a 2.4-litre, 150-bhp unit mated to a 5-speed manual and a 2.8-litre one with a 6-speed auto and 174 bhp sent to the rear wheels now power it. The 34.4 kgm and 36.5 kgm torque figures, like the power ratings, are a significant bump up – nearly 50 per cent more than the previous car. Toyota have worked hard to improve the overall thermal efficiency of the new motors by as much as 25 per cent, while the overall powertrains have reduced friction, or so its engineers claim. The massive rise in power is also backed by a claimed improvement in fuel efficiency figures – as high as 15.1 kpl for the 2.4 and 14.27 kpl for the 2.8 auto – a double-digit percent improvement over the previous 2.4 for the former. Other improvements include revised chassis settings to improve overall ride quality (longer travel suspension) and the addition of driving modes.

A NEW SET OF CLOTHES…

What makes an Innova an Innova is its monovolume shape and to some degree the new one has lost some of it. The bonnet line is higher, the gaping grille is nicely integrated with the slit-like headlamps. In fact, the chrome strips that run across the grille run through to the headlamps, giving the vehicle a rather futuristic outlook. Does it work? Given the number of first-generation Innova owners who stopped us at every opportunity, it looks like it might have. What makes the Innova distinctive yet familiar is the side profile. The pinched, ledge-like waistline nicely separates the windowline from sheet metal, giving it a newish stance. The heavily raked rear window panel relieves some of the slab-sidedness, yet you won’t mistake it for anything but a Toyota. The wide, Mitsubishi Evo-like tail-lamps and the rear spoiler have altered the Innova’s overall profile, although it opens up opportunities for heavier repairs in case of an accident.

… AND A BEDROOM FIT FOR A KING!

On the inside, the new Innova is radically different from its outgoing avatar. The dashboard follows in the same vein as cars like the Camry and the Corolla with the wide, horizontal approach, broken by two swerving lines. The large 7-inch touchscreen is intuitive and the system is fast to respond. A smaller, 4.2-inch information display on the instrument binnacle offers all sorts of information – from fuel consumption to range to settings and even GPS direction markers.

Simply put, the top-spec Innova has a lot to offer. From cruise control to seven airbags and ABS to separate temperature controls for the second and third row, it’s got the toys to match the expected increase in price. Lots of use of suede and faux wood liven up the interiors, though the former could soil easily. The seats are wide and comfy – no fault there, while the seatback of the front seats gets folding tables for second-row occupants. Leg-room and head-room is still pretty good and the inherent flexibility of the seats is staggering. The second row captain chairs can now be folded away using a single lever, not two, and has enough seat pitch once moved on the rails. The third row still has a bit of a ‘knees up’ stance, though it’s somewhat improved from its predecessor. The increased length has also helped make the boot a touch wider, something most customers would like.

THE KING HAS NEW FIGHTING SKILLS…

The Innova still retains a body-on-ladder chassis, but it’s now a second-generation IMV platform. A highly rigid frame with added reinforcement members reduces high-frequency movements and has also improved steering response. Increased spot welds in critical areas and use of more high-tensile steel has led to overall improvement in structural rigidity of the vehicle, or so is the claim. The increased kerb weight by 180 kg for the manual and nearly 200 kg of for the 2.8 auto is offset by enhanced power-to-weight and torque-to-weight ratios. This is clearly reflected once you are behind the wheel.

What has changed for the Innova, and by a massive quantity, is the overall performance. You no longer have to work the 5-speed manual gearbox and the motor within an inch of its life to get to respectable speeds. Three-digit speeds are now effortless – cruising at speeds of 120-130 kph doesn’t take a lifetime to achieve from standstill. If I were to hazard a guess, the base 2.4 should hit 100 kph in 12 seconds or under, and the 2.8 should be at least a second quicker to 100 kph, if not more. The 5-speed manual’s throws are slightly shorter and a bit more positive, although it’s still not comfortable shifting quickly, especially to fifth.The clutch action is a touch heavy, but not uncomfortably so on highways.

It’s the automatic, though, that’s a bit of a revelation. It might feature a torque convertor, but it utilises the 36.5 kgm rather well. The additional cog means it cruises even more comfortably at speeds of 140 kph or thereabouts. It might be a bit slow to shift, but you are never left wanting, especially during overtaking manoeuvres. Customers who yearned for an automatic Innova for the past decade really won’t be disappointed. What is new are the driving modes: the standard mode is default when you start the car and has enough grunt for both motors. In Eco mode, there is a sense that the air-con compressor cuts early (mind you, the air-con is vastly improved otherwise). The Power mode allows for a crisper power delivery and better throttle response.

Toyota engineers are quick to point out that they’ve worked hard to improve NVH and on some accounts, one can agree. Certain high-frequency sounds are well controlled unlike its predecessor, but like its predecessor, clatter is still a touch excessive and it does get audible at high speeds. The ESP really reins in the Innova very well and even when switched off, it does seem to provide some support if it senses that the driver is ‘overdriving’ the vehicle. Overall handling is very neutral and the 17-inch wheels really provide pretty good grip. The hydraulic power steering feels slightly over-assisted in comparison to the previous car, but honestly, it’s the right compensation for the rather hard-to-use one of the former.

Another big improvement is low-speed ride. The outgoing Innova suffered from a jiggly low-speed ride, but that’s not the case anymore. A rather plush low-speed ride with a mature high-speed ride puts the Innova back on top of the heap and at par with the Renault Lodgy in this area, if not better (a comparison test should sort things out later). There is slightly increased body-roll now, but it’s not high enough to upset occupant comfort on long distances.

Long distances is what the Innova has always been the perfect companion for. Only that it’s more powerful, driveable, efficient, comfortable and offers more features, too. All of which should mean an increased price tag, too, a comfortable 10 to 15 per cent higher than the outgoing model. Expect the top-spec Innova petrol to retail for roughly Rs 21-22 lakh, on-road Mumbai, and the automatic at Rs 23 lakh. That would put it smack bang against top-spec entry D-segment sedans like the Octavia 2.0 TDI and 1.8 TSI auto, as well as within spitting distance of lower-spec variants of the Ford Endeavour. Will that change anything? Given the Innova’s decade-plus track record, hardly. What it might do is once again force a re-think in the entry D-segment and I suspect, make life rather difficult for vehicles like the Mahindra XUV5OO. Toyota has every reason to celebrate 2016 – the king is well and truly back!