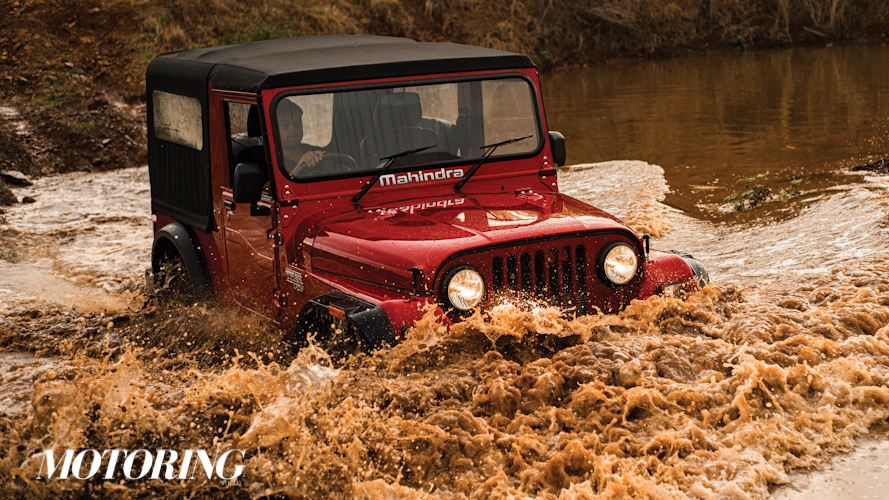 I am not going to waste any time here. The only grouse that most of us had with the Thar was that its interior just didn’t make the cut. It was a hack job that comprised components that Mahindra had found lying around in its parts bin. What was worse was that if it didn’t fit, it looked like it was made to by using hacksaws. Otherwise, I’ve always loved the Thar. It just wasn’t a car that I could think of as a daily driver. And hence, if I were to buy a car someday, as much as I wanted one, the Thar would most likely not be it.  Until now.

Over the years, the Thar has gotten all of zero updates. I’ve been hearing a lot about a new Thar arriving for a while now and rumours about major changes to the chassis were also floating around. But now that the car is here, I know that the changes do not include any to the chassis. There are three major changes and I’m going tell you all about that in increasing order of importance.

The first and most visible change is the updated exterior the Thar CRDe gets. There is that updated front bumper that looked quite ugly the first time I saw it. But the thing with it is that the more you look at it, the less ugly it becomes. If you ask me, they should have left it the way it was. But thankfully, replacing the new one with an aftermarket unit isn’t going to be all that difficult. And if you ask nicely, Mahindra will even sell you one. The soft top, too, has changed a little bit. The rear end now slopes very gently inward and this helps in making the Thar look a little less boxy. Other than this, an updated rock rail on the side and fender flares that are now standard, the exteriors haven’t changed much.

Change number two is all mechanical. The Thar now gets a locking rear differential from the guys at Eaton. It isn’t a manually locking differential like the one you get in the Gurkha. This particular unit (called the MLocker) locks the differential through a self-energising clutch whenever it senses a difference in speed greater than 100 rpm between wheels. This means that in real life, while the MLocker will ensure you get a lot further in the updated Thar than in an old one, don’t expect it to help you get out of the real hardcore stuff. The Thar still runs the trusty 2.5-litre, CRDe motor that makes 105 bhp and 25.2 kgm. No changes have been made to the motor, the gearbox, transfer case or suspension.

Now comes the most significant bit of the update, according to me. Remember that questionable interior that I told you about? That’s long gone. The new Thar gets an all-new interior that includes a new steering wheel, new dash, new clocks, new seat and a new floor console. There is a new dual-tone dashboard that looks like it was designed to fit in the Thar and not some other vehicle. There are no rough edges and the whole thing looks a lot more premium now. It even gets a lockable glove box. The AC vents now have chrome accents and the AC controls don’t look like you made them at home anymore. The instrument console, too, is now quite modern with a three-pod unit that has readouts for fuel level, speed and rpm aside from all the tell-tale lights. The steering wheel, too, is all new and is the same unit that you will find in the new Bolero. It has become smaller in diameter and is a lot nicer to the touch. There is also lots of storage to stash all your bottles and the entire cabin feels so much better put together.

On the whole, the only complaint that we had about the Thar has been addressed with this update. The Thar has suddenly become a car that you can think of driving every day. And Mahindra has done this without taking away what the Thar does best — muck around off-road. It has even stepped up its off-roadability a little bit with that locking differential. The updated Thar now costs Rs 8.03 lakh (ex-showroom, Nashik). Not a bad price, especially now that you don’t have to worry about theft with that engine immobiliser added.