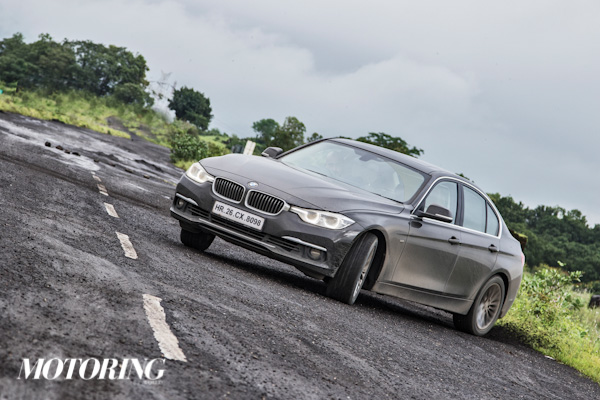 Thank you, Government of India. If I may be so bold, your ever-so-rational logic and sound decisions have always benefitted this thriving country of ours, and it’s evident that the decisions you make on behalf of — and for — the citizens have brought us nothing but contentment and peace. Without you, we’d be a fumbling excuse of a population, struggling to comprehend the more important issues like which toilet paper would be less abrasive and who really did let the damn dogs out.

Now, kudos to those who picked up on the mordancy of the previous few sentences, but the government has, for once, albeit indirectly, done some good. Thanks to the sound logic of the diesel ban (which has since been lifted, yes, I know), the people who provide us cars to get places have been busy making petrol power a bit more accessible, which is why I found myself sitting in the confines of a lovely BMW 320i one morning. And man, do these guys know how to make their cars.

It takes a man of special skill to not appreciate a finely balanced petrol-powered rear-wheel-drive sedan. I’d assume that man enjoys long barefooted walks on a beach splintered with broken glass and a nice relaxing drive through a war zone. There are very few cars that you feel absolutely content in, ones that don’t make you question whether you’ve simply settled and joined the herd. It’s amazing how the 320i manages to evoke just that.

On the move, it’s as comforting as it is transformative when you switch driving modes and entertain the juvenile in you by squeezing the accelerator pedal down as hard as a stress ball. The 320i’s 2.0-litre inline-four may not sound like much — and the 181 bhp and 27.5 kgm figures would attest to that — but it’s about as inadequate as the funds pumped into Thailand by people who ‘just want to have a good time’, which is to say it’s anything but. Its driving modes allow it to really play the part you want it to, because switch to Eco Pro or Comfort and a steady right foot will allow you to drift off and focus on better things, like that upcoming bachelor’s in Thailand. But I hear drifting off while driving is a bit of a no-no, so probably best not to do that. Instead, switch to Sport+, hold down on that traction control button for five seconds and enter a roundabout how you really should — rear tyres lit up, completely sideways, and with you having absolutely no idea of what you’re doing. That said, the 320d does feel a bit more willing to let its tail out thanks to the diesel engine pumping out more torque, but it’s not like the 320i falls short when it comes to driving pleasure. Yep, that’s right. There’s only one place to be in a car like this — the driver’s seat.

I fall hard for cars like this one. Despite what I just said, it’s a forgiving car; one that will allow you to correct your lurid, terribly-executed slides and emerge slightly more alert thinking, ‘I definitely need to do that again.’ And that’s the beauty of it all, isn’t it? It’s just such a good-looking car and it has so much of class on the inside. Some people may call the interior minimalist and not up there with the best, but I’d prefer calling them out for their lack of taste. It’s got character, the 320i, and it loves indulging you in a good time. What helps is that it rides brilliantly and the ZF 8-speed gearbox gets telepathy as a standard fitment. Even the way the steering communicates with you is nothing short of magic. Whether you’re driving around in dense traffic or hurtling past that heavily modified Swift that had no right going as fast as it did, the 320i feels like it’s in its element. It’s a solid driving machine that’s ready and willing to do as you say.

It’s looking pretty perfect then, eh? Well, no. It could sound better and the mid-range punch thanks to the turbos is addictive, but I’d have liked to have had a naturally-aspirated BMW that screams all the way to the redline like the older BMWs. It does run on petrol, after all. The rear seat could have been more accommodating as well and a bit of a wider body kit wouldn’t have hurt, either. But, I’m sorry. These just aren’t the kind of things that would make you turn around and call BMW out for wasting your time. I think it’s offering you a pretty sweet deal. So what if it’s priced it at ` 42.7 lakh (ex-showroom, Delhi) for the top-spec Luxury trim? That’s not cheaper than the same spec in diesel form, but it’s a fine car to drive nonetheless. Go on, then. Do it. Just be sure to call us if and when you overcook that inevitable slide around a bend and a trash can calls it a day. Fun times!