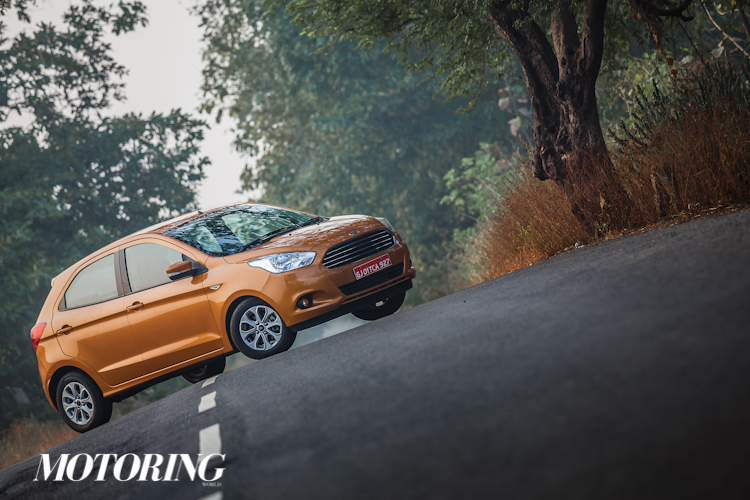 The Ford Figo was always the underdog. It was an ageing product that nevertheless scored highly on safety in the Global NCAP tests. It had great ride/handling balance and a cracker of a diesel engine. It was the best driver’s car in its segment. How does one top that? Ford addressed all the Figo’s weak points and has presented us with this, the new Figo. New chassis, new engines and, most importantly, a completely new interior. Does it still have the magic of old?

IS THAT AN ASTON?

No, it isn’t. Ford decided a new design language was in order a couple of years ago and the result is that all-new Fords (other than the Mustang) tend to look like a certain British-Chinese supercar maker’s design. We’ve seen it before in our very own market with the Fiesta and the EcoSport, and now it has made its way onto the Figo and its sedan sibling, the Aspire. It isn’t pretty, but it certainly is good looking. The two-part chrome grille flanked by the large headlamps is in itself aggressive, but what makes it truly stand out is the power bulge on the hood. The side is relatively simpler, with a strong shoulder line running from front wheel arch to tail-lamp. Further vertical relief is provided by the lightcatcher at the bottoms of the doors. The wheels look a little small for the car, but the tyres compensate a little for that. The top-spec variants you see on these pages offer mirror-mounted indicators, which is why there’s a silver blank on the fenders.
The rear is a little disappointing compared to the front, because the tail-lamps (not to mention the paint) echo the Hyundai Grand i10’s. To be fair to Ford, it isn’t the only one who seems to have hit on a similar design for their small hatchback. The rake of the rear glass is halfway between ‘staid’ and ‘so exciting that you can’t see out the back window’, and the height of the rear bumper is disguised well with horizontal creases. Is it the best-looking car in its class? Not really, but it runs pretty close thanks to its fresh, modern design.

A Fiesta. Or an EcoSport. Or even an Aspire. Ford is successfully using the new dash design we first saw on the Fiesta (and the general public, on the EcoSport). This consists of a black theme with silver and chrome accents. At night, the fonts and needles are a cool blue. The head unit looks like a simple unit, but it offers voice commands for a number of things including the phone and music. The design of the centre console isn’t as fresh and new as the exterior design, and everyone might  not take to it despite the many things  it does. There are too many buttons  on the dash, where others like the Tata Bolt are moving towards colour touchscreen systems.
The steering wheel is new for the Figo and the design has been carried over from the EcoSport/Fiesta. The contrasting stitching on the seats is a nice touch and the thigh support combined with the height-adjustable driver’s seat accommodates occupants of well over six feet in height. The rear seats are comfortable, but if you’re six feet tall, the integrated headrests will get very uncomfortable. The NVH in the cabin is impressive — this feels like a grown up car, and has one of the quietest cabins in the class. The automatic gearbox has buttons for manual shifting on the gear lever and no paddles behind the wheel. It’s a fresh interior, but a touchscreen would have gone a long way in making it future-proof.

DOES IT DRIVE WELL?

The Figo has always been at the top of the class when it came to driving pleasure; the original Figo had a stiff suspension and a hydraulic steering system from the Fiesta Classic, which means the current Figo has big boots to fill. Unfortunately, the engineers at Ford admit that the Figo/Aspire brethren are some of the softest setups they’ve had to engineer yet, so they’ve given up driving pleasure for better low-speed comfort. The steering system is also an electrical one now in the interests of fuel economy, so while it is accurate, the feel isn’t as spot-on as the previous Figo’s. Thankfully, there’s light at the end of the tunnel — the drivelines.
The 1.5-litre Ti-VCT petrol and 6-speed dual-clutch transmission is the same engine/gearbox combination that we’ve seen in the Fiesta and EcoSport, and Ford hasn’t detuned it, either. A healthy 110 bhp and 13.9 kgm are served up, but this being a naturally aspirated engine it needs to be worked hard to get going. There’s good bottom-end response, but the mid-range is weak and getting to the top end under kickdown often nets you more power and torque than you asked for. This can be mitigated by shifting gears manually, but that involves shifting the lever further back to the ‘S’ mode, then using the buttons (top for upshift, bottom for downshift) and the buttons don’t work in ‘D’ — so once you’re done overtaking, shifting back to ‘D’ is an exercise in restraint, because push too hard and you end up freewheeling in neutral. That said, there’s only one comparable transmission anywhere near the price bracket of the Figo if you’re a driving enthusiast, and that’s the one in the  VW Polo.
The diesel is a whole different kettle of fish. It has grown to 1495cc and it generates 98.6 bhp and a very impressive 21.9 kgm of torque. What is even more impressive is the torque spread; that maximum torque figure is available all the way from 1750 rpm to 3000 rpm which means the torque curve is flatter than Drew Carey’s haircut! Not only that, in testing it surprised us with a sub-10-second run to 100 kph. That was the prerogative of the D-segment petrol sedans not too long ago and here we’ve got a Figo delivering that kind of acceleration! The extra weight over the front axle also means slightly better steering feel, so as a driver’s car we’d pick the diesel over the twin-clutch auto.

IS IT COOL ENOUGH TO BUY?

The Figo has a few drawbacks like the slightly dated centre console design and those integrated rear headrests that dig into a tall person’s back. On the other hand, it offers as much as six airbags on the top-spec diesel variant, voice-control technology and a twin-clutch automatic paired with a fairly large petrol engine. Take a careful look at the price and it is apparent that Ford has slotted the Figo in the space between premium hatches like the Maruti Baleno and Hyundai i20 and entry-level ‘big’ hatches like the Hyundai Grand i10 and the Tata Bolt. As a result, it gets into the fray with the big daddy, the Maruti Suzuki Swift. However, when you’re talking about the diesel and the automatic, the Figo outscores the ‘Zook on features and its maturity of design, so at ` 6.9 lakh for the automatic and  ` 7.4 lakh for the manual, ex-showroom, Delhi, it is the hatch of choice for the discerning consumer.