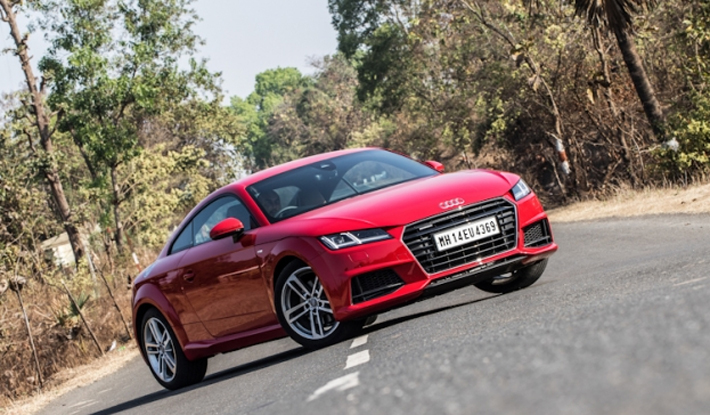 The TT has been around since 1998. The first car was a pretty design for its time but looked a lot like it was designed by someone armed with only a compass. It was all curves, all over. It did, however, make a starring appearance in Microsoft’s Midtown Madness 2. In 2006, the second generation arrived with a few sharper lines, but the overall design was still very feminine. Last year, though, the all-new TT broke cover and it was a radical step in terms of design. We had a chance to preview what the car was like and we must say, we’re impressed.

The TT has finally managed to break away from its image of being a lady’s car. The lines have become more aggressive now. The front end features an all-new grille that has transformed from being a slit to a hexagonal unit. With the new Matrix LEDs, the entire front now looks a lot like it was inspired by the bigger R8. The side profile is pretty much the same but the rear gets a completely redesigned tail-light cluster.

Inside, the excellent sports seat makes sure that you’re sitting in place even when the g-forces go up. As with all other Audis, the interior is well appointed with all the creature comforts you could ask for. However, what we really like are those jet turbine-like air vents with the embedded temperature and fan controls. The instrument cluster has now become like a TV with a full colour display that can display navigation if you want it to.

The TT runs a 1984cc turbocharged inline four cylinder motor with direct injection. The motor makes a healthy 230 bhp and 37.7 kgm of torque. The power delivery is quite linear even though the car really gets going once you start revving it like a mad man. The engine is mated to a 6-speed dual-clutch gearbox, which, characteristic to the S-tronic gearboxes, is quick in shifting both up and down. Combined with the trademark quattro, the car can post some impressive numbers. When we put it through its paces, the car did 0-100 kph in 5.6 seconds and hit a top speed of 203 kph (the company claims 250 kph). There is one thing I really like, though. The engine characteristic dramatically changes when you start caning it. The motor goes from a subtle rumble to all-out roar when you start climbing the revs. This means everything around you is all peaceful and quiet unless you don’t want it to be.

It’s a TT. So yes, it does handle. Combined with the suspension setup, the excellent chassis and quattro, the TT is quite the riot to chuck around. It lets you get up to all kinds of mischief without having to think about it twice. There is just enough give in the electronics to keep even amateurs like me happy. You can pull four wheel drifts that make you grin ear to ear and be sure that just before the chaos sets in, the electronics will step in and bring things back under control.

But what I really liked about the car is that despite being such an awesome car to drive around, the ride isn’t too harsh. Audi has managed to get the suspension set up just right to give the right balance between handling and ride quality. Of course, this doesn’t mean that you go jumping around in country roads, but in urban situations (even on broken urban situations) the ride is quite comfortable. And with the reasonable ground clearance, you won’t have the car grounding anywhere either.

The Audi TT is not the car I would choose for daily use. But if I had the extra money, and was in the market for a second car that I could have some fun with, the earlier TT would never even have been in my radar. Now though, I might give it a harder look. But with an expected price of Rs 65-70 lakh, don’t expect the sales numbers to break records. The new Audi TT will be launched by the end of April, 2015.