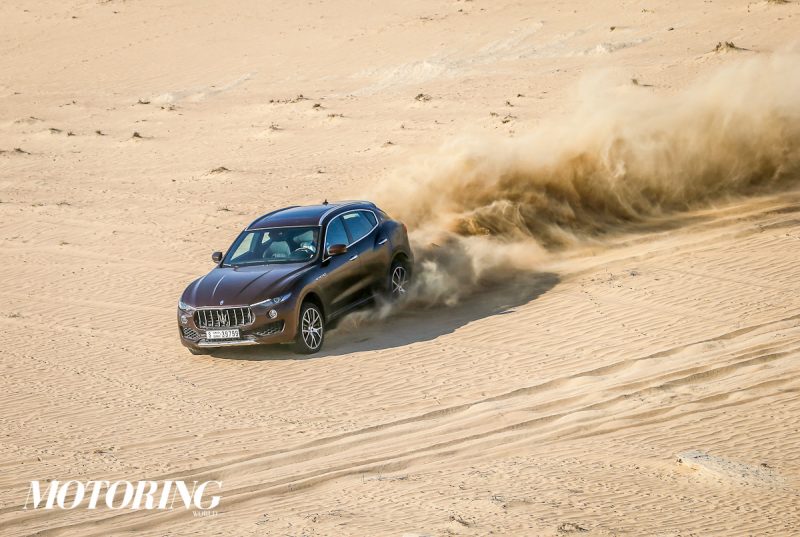 That we’re in the midst of a rather experimental phase is quite obvious. For a while now, SUVs have crossed the minds of every car manufacturer who’s got some ambition of making money. And that’s why brands like Maserati are getting serious about going from making luxurious, sporty sedans to also producing four-door hatchback shopping-mall crawlers. Has the world gone a step too far in its loony-ness? Probably, but that doesn’t seem to stop them anyway.

So What Do We Have Here?
The Maserati of SUVs, that’s what. If that sounds a bit much then I’d like to point out that that’s Maserati’s tag line for the Levante, not mine. The work that Maserati’s done on the Levante, however, is a good reminder of just how important it believes this car is for its future. For a start, this SUV has been on the cards for 13 years now. I’ve only ever seen that kind of dedication and commitment from my parents in holding onto one of their cars (‘What’s the use of buying another if we’re going to replace it at some point anyway?’).

All that time, though, seems to have been spent well. Pictures don’t do it complete justice because the Levante looks and feels a lot bigger and plusher in person. It’s not instantly attractive like, say, the Jaguar F-Pace, but it’s got a way of growing on you. It’s based on the Ghibli’s platform which gives it some solid guts, and Maserati’s really gone all out in an effort to impress you because there’s an optional Ermenegildo Zegna-designed interior you can opt for. It really wants to drive the Italian-ness of the car home, clearly.

The interior now gets a centre control knob for the touchscreen instead of the knobs previous Masers had flanking the touchscreen. That’s a good thing because the previous setup looked very low-rent, honestly. It’s not as polished as it could be, but it doesn’t take long to get used to it, either. Maserati hasn’t taken any chances with the Levante and has seriously given it a lot of kit to live with. To that effect, there’s a rear parking camera, cruise control, hill-descent control, bi-xenon headlamps with washers, four-zone climate control, paddle shifters, 20-inch wheels, a sunroof, and the previously mentioned Zegna-outfitted interior. All this comes at a cost, of course, but the Levante makes you feel like it’s all worth it when you’re in it. The only things missing are a machete and a mafioso threatening your life.

And What If I Feel Like Driving It?
Well, then, you’d be very happy indeed. You’re best off thinking of the Levante as a Ghibli on stilts. It’s bloody quick, has all-wheel drive, adjustable ride height for when you need to run over someone, and it can be ferociously loud when you want it to be.

The Levante we got to drive was a 3.0-litre V6 that can be had in two power ratings: 345 bhp for the base version and the 424-bhp bonkers variant that we enjoyed ourselves with. Maserati’s tweaked the intake and exhaust and given it a few software updates, too, to allow the power output to swell marginally over the Ghibli’s, thereby allowing it to get to 100 kph in 5 seconds flat (company claimed, of course). Wonder if there’s a 3.8-litre V8 (the one that powers the Quattroporte) in the works, too. A Levante GTS would be outrageous, really.

For now, though, there’s absolutely nothing to complain about with the 424-bhp V6, because it’s oh-so-much fun to drive. The 8-speed ZF works beautifully, and there’s a magnificent roar from the quad pipes every time you squeeze the accelerator pedal. Dubai’s rather strict speed limits ensured that I’d gun it up to 120 kph and instantly back off, each time letting out a slightly frustrated sigh because I couldn’t push it any harder. A big reason for this is that you never tire of the distinctly Italian snarl, something that really sets it apart from its German rivals. Another big plus is the fact that the Levante remains distinctly prehistoric by opting for a hydraulic steering setup at a time when most of the world’s switched over to electric setups. And that’s a fantastic thing. There are very few cars out there that have steering wheels that will be able to tell you exactly what limb is being run over by which front tyre. To give us all a better idea of what it’s capable of, Maserati gave us a day at the Dubai Autodrome, wherein a tight and twisty section of the track with elevations and descents aplenty was cordoned off. All I can say is that if a car that’s more than 16 feet long and weighs more than 2000 kg can clip corners inches from a kerb and be perfectly composed while at it, well, then, it’s a job spectacularly done by Maserati.

It’s even laughably able off the smooth stuff thanks to Maserati’s Skyhook suspension. It employs standard air springs collaborating with electronically controlled dampers, and it has five ride-height settings that include two off-road positions that raise the ground clearance by a maximum of 1.6-inches — that’s as much as 9.7-inches off the ground! Now, at this point, I get that the predominant thought is that not even a handful of Levante owners are going to subject it to off-road trails, but Maserati’s reasoning is that SUV owners like knowing that their cars can do it if required. Seems logical. To that effect, there’s a limited-slip rear differential, all-wheel drive, generous ramp angles, and Maserati assured us that it’s plenty happy wading through water, too.

Phew, That’s Exhaustive. Think I Should Get One?
I couldn’t think of a single reason to not consider a Levante. It’s big, bold, undeniably capable and refined, and sounds like it’s about to rip open a portion of its own rear under hard acceleration. Sure, Maserati’s taken its sweet time getting it into production form and people obviously love the Porsche Macan and Jaguar F-Pace, and a few Audis and BMWs, for how capable they are, but I think Maserati’s onto something here. I can’t comment just yet on how it will feel against said rivals, but Maserati’s made a solid effort here, no doubt. If all goes according to plan, the Levante will be in India in 2017, and you need to drive one to know what I’m on about. It really is something special. If not, I’d suggest waiting for the GTS version. I know I am.