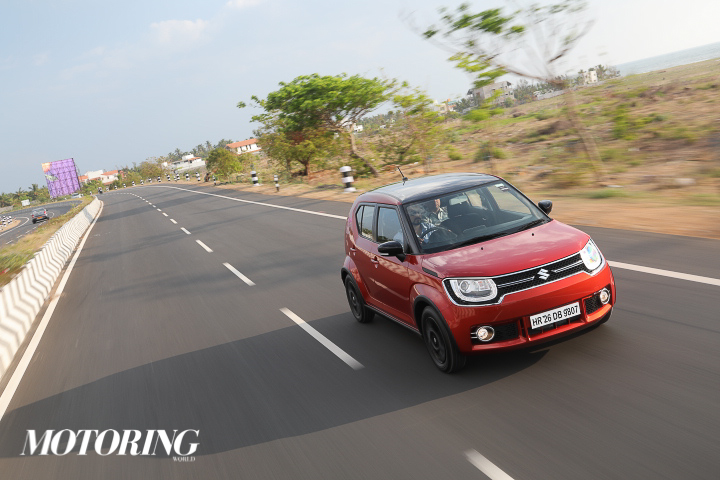 The Ignis is a bold move by Maruti Suzuki. It’s a slap in the face to the critics who lambast cars for being too safe and characterless. For a population that begs to have cars that stand out and have a personality, we usually find some way to critique that, too, citing that the carmaker has gone ‘overboard’ in its attempt to please, but I believe that Maruti Suzuki has gotten it right this time. How so? Read on.

The Ins and Outs
I do believe that people will be wary of the Ignis’ looks. At no point does it feel like Maruti’s taken the safe way out, and its hope of appealing to the younger ones will work. It’s not something you’ll fall in love with instantly (even though I did) but it does have that something extra that makes it a Maruti unlike any other. And it all shows. The way the LED headlamps are shaped, that neat grille, the tiny silhouette, the claw marks on the side, the black alloys – it all works. That is, until you saunter over to the back. Er, this could have been handled with a bit more precision, honestly. It’s not ugly, mind, but there’s a certain sense of ‘Who smacked the rear with a frying pan?’ that consumes you the moment you see it.

I do have to admit, though, that overall it’s quite a daring and bold design, one that’ll find many, many homes in the country. And Kudos to that, Maruti, because we need more cars like this. We need a breath of fresh air, pardon the cliche. And that’s reflected perfectly on the inside. Great design complements a feature rich cabin. The steering is new and has controls on it for the infotainment, the big, slab of a screen in the centre houses most of the things you’ll require like music and navigation, and the toggle switches right below it for the air-conditioning are really cool to use. The seats are comfortable and there’s even space behind, surprisingly, for two tall people to sit comfortably. I’m impressed. Good job, Maruti. The caveat, however, is that the lower variants get a button-operated music system in the place of the screen and knobs for the air-con controls. It looks a bit odd compared to the higher spec one, that’s for sure, and Maruti could have probably done a better job with this.

The Bit That’s Important
The drive, of course. Maruti will sell you the Ignis in petrol and diesel formats (1.2-litre and 1.3-litre, respectively) and despite the constraints that a media drive presents, we were able to have seat time in both of them. You can spec both engines with either a five-speed manual or an AGS (Automatic Gear Shift, Maruti’s term for an automated manual transmission). The fun one, of course, was the petrol manual.

It’s a bit of a tough start thanks the non-progressive clutch that demands your attention. So you need a few revs to get going cleanly otherwise you will end up stalling it. I did. After that, however, it’s a brilliant drive, and I’d even go so far as to say it’s a bucket-load of fun. The steering has a nice weight to it, the accelerator is sensitive to your inputs, the engine is lively and the car sounds good at higher revs. Even the gearbox is nice with well-defined slots and a clean shift action. I suppose the weight of the steering might not make it perfect on the road at crawling speeds but it’s manageable. Another big reason to like the Ignis is its ride. It handles the road pretty well thanks to the suspension being setup slightly on the firmer side. This also means that at higher speeds the car is pretty well settled despite weighing less than a tonne!

The weight and the power it makes (81 bhp at 6000 rpm) mean that the Ignis is quite a quick car, and the eagerness its chassis displays is evident from the moment you start off. If what you’re looking for is a fun-to-drive small car, ensure that the Ignis is on your shortlist. The Diesel manual also makes for an interesting drive. It makes 73 bhp at 4000 rpm and has a clean run to the upper edges of the rev band. My only concern is that some may find the NVH slightly high. Maruti could have done a bit more damping to address this. Other than that, the 1.3-litre diesel performs admirably. Even the AGS ‘box is better than most AMTs around. The upshifts are pronounced, sure, but it seems to catch on to your driving style rather quickly so traffic stints aren’t a worry in the least. If, however, you want a fun drive, be sure to get the manual ‘box.

Get the Maruti Ignis. You really should. Like I said earlier, it’s a bold move by Maruti, but it’s backed by sound decisions. It’s nice to look at (well, for the most part), has a spacious cabin, funky interior, nice engines and gearboxes and it will make you stand out pretty well. The thing you have to keep in mind, though, is its price. Rs 4.5 lakh to Rs 7.8 lakh (ex-showroom, Delhi) isn’t as cheap as some thought it would be, but that shouldn’t deter you because of what it provides as a car. Maruti just seems unstoppable, doesn’t it?