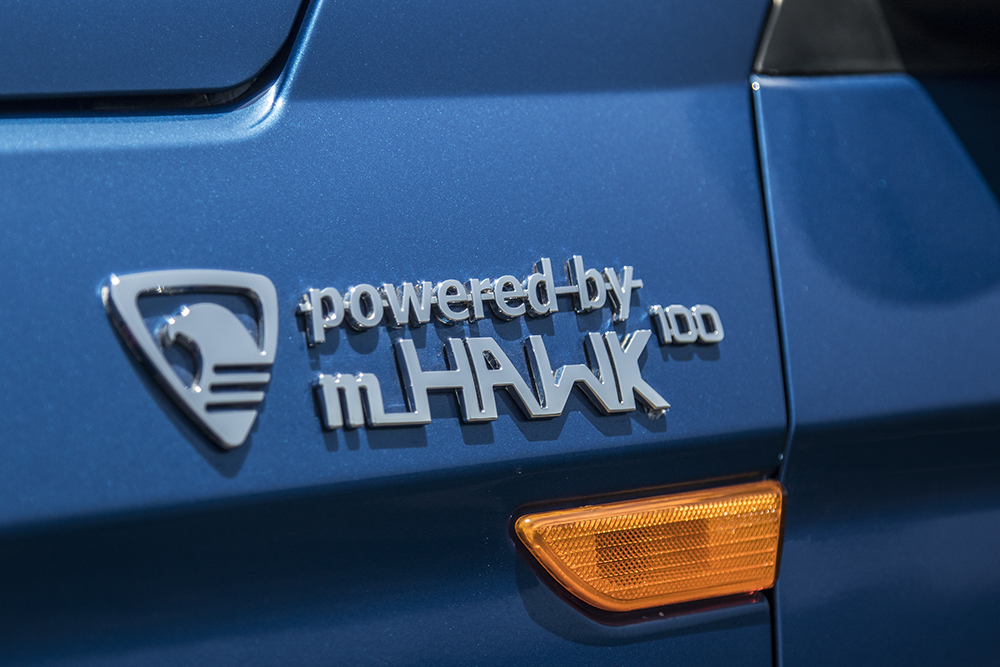 The TUV in itself is not a bad proposition, but while it does everything well, it is getting a more powerful engine. It’s called the mHawk 100 and it is being carried over from the Nuvosport. We like!

On the outside? Two new paint shades, one a cool blue, the other a red. There’s also ‘mHawk 100’ badging on the flanks where the regular TUV gets ‘mHawk 80’. Other than these things, there’s no difference at all between the variants sporting the two different engines. Not a good thing, we say, because the mHawk 100 customer will (understandably) pay more for the extra power – and we Indians love to lord it over the others, don’t we?

It looks the same as before, but Mahindra has already been listening to feedback and improving the TUV. The rear seat base is longer and offers more under-thigh support than before, and there is now a single ISOFIX tether point to mount a child seat in the TUV. Also worth mentioning is that the TUV meets all upcoming crash safety requirements, and airbags are standard across the range. ABS is an optional extra, no matter the variant.

WHAT’S WITH THE NEW ENGINE?

The engine is the same basic 1493 cc, three-cylinder turbocharged unit, but a two-stage turbocharger ups the horsepower figure to 100 bhp, up from 84 bhp. Torque remains more or less identical, the figure being 1 kgm more than the mHawk 80’s 24.5 kgm. The real difference lies in the torque curve – the mHawk 100 has good shove almost off idle, and it’s huffing hard at just 1500 rpm. By the time you get around to 2000 rpm, you can make out that you’re moving along quicker than the 80 bhp version. Flat out there won’t be much difference between the two, but in-gear there will be a massive difference between the two. Like the Mahindra guys claimed, the mHawk 100 has no trouble taking on walking speeds even in third gear.

HAS THE HANDLING CHANGED?

No, the TUV remains well-behaved, as before. We only got to try it out on the Mahindra test track at the factory, but suffice it to say that on the limit it impressed us for what its ladder-frame construction offers.

SHOULD I OPT FOR IT?

We’re always happy about more power, and if everyone could follow suit and increase their power figure by 20 per cent, we’d be a lot quicker to get to work every day. That said, the TUV’s new engine spec offers the greatest gains in drivability rather than outright speed, and makes it a much better fit in traffic. You’ll have to pay a premium of Rs 8,000 ex-showroom over the mHawk 80 for it, of course, but it’s well worth it.