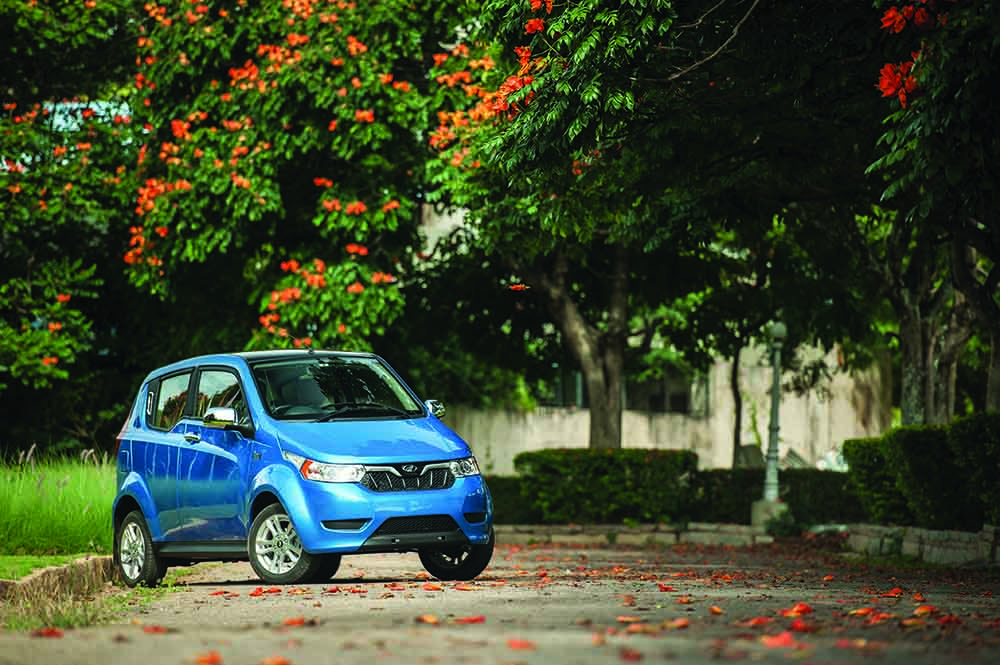 Electric cars are not the future. Before you jump for joy or call me deluded, let me clarify. Electric cars are the present. Ever increasing pollution, and I include noise pollution along with other kinds of pollution here, is making buyers and manufacturers think about going electric, and almost all the big names in the industry have already shown electric concepts which will soon be realities. Unlike the gasoline models, India has not been far behind when it comes to electric cars, largely due to Mahindra Electric’s foresight. It took over Reva Electric Car Company and turned the ugly duckling into a decent-looking car. Well, almost. And now they have added much more.

Range Plus
One would imagine the perennial ‘kitna deti hai’ question would be history when cars stop using gasoline, but it is quite the opposite. The same question has been rebranded as Range Anxiety, though I like the Indian version better. Mahindra Electric did a lot of homework on this one and has increased the range on the e2oPlus to 140 km (only on the P8 variant); 140 km is actually quite good, even if you were to drive from one end of any metro in the country to the other. Plus quick charging enables you to charge the car up to 80 per cent in just over an hour, if you decide to go on an impulsive long drive. The REVvive feature is quite neat, too; once activated, it gives the car an extra 5-10 km range to help it reach the nearest charging point. The e2oPlus can also be charged through any normal 16 Amp power point, which is again something to assuage range anxiety.

Looks Plus
The e2o is not the type who would win beauty pageants, but it is a definite upgrade over the Reva. Adding two doors has not taken away from the looks of the car, as it retains similar visual cues from the two-door e2o. There are elements which reinforce its position as a Mahindra car, such as the new grille up front, vertical rear door handles (a la KUV1OO) and some chrome bits. The rear gets an integrated spoiler, but don’t get your hopes up as you aren’t going to get to speeds that might cause Downforce Anxiety.

Space Plus
The space inside has to be the biggest plus over the two-door e2o. From the outside, you do not expect the e2oPlus to be very spacious, but it surprises you. The rear seat can comfortably seat two full-size adults with decent leg- and head-room.  There is good under-thigh support and the seats are comfortable for city driving. There is a 135-litre boot, too; not enough to pick up relatives arriving from Canada, but certainly sufficient for grocery shopping and a couple of backpacks.

Feature Plus
The e2oPlus gets everything that a normal hatchback would get in terms of features. It has 10 on-board computers which track performance and health of the car, and the smartphone app is your interface with these ten computers. You can lock/unlock the car, see battery consumption patterns and even find the nearest charging station through the app. The reverse camera and hill assist are practical and useful features, too. Steering-mounted audio controls are an obvious miss, even on the P8 variant.

Drive Plus
There is a reason why the driving bit for the e2oPlus comes towards the end of this article. Not because the car does not drive well, but because I feel buying an electric car is a more-head-and-less-heart decision. How the car drives is probably not the first reason to buy an electric car. It is mostly the convenience, features, zero emissions and economy which precede the driving bit. While ticking all those boxes, the e2oPlus is not a bore to drive; 40 bhp and 7 kgm may not sound like impressive numbers, but while driving around in the city, the car does not feel lacking – as long as your expectations are limited to saving the earth and being nimble in traffic. The acceleration from the electric motor is immediate and there were times when I did wish it had more juice. Maybe an e2oPlus Plus will.

The biggest plus has been the starting price for the e2oPlus, which is 5.46 lakh (ex-showroom, Delhi) for the P4 variant. Despite the Government of India’s FAME scheme, which aids development of hybrid and electric cars, the cost of batteries is a major factor in manufacturing electric cars. The entry price ensures it has a place bang in the middle of popular hatchbacks, clearly an attempt to convert more people to electric cars. The price for the P8 variant, 8.46 lakh (ex-showroom, Delhi), is on the higher side when compared to normal cars. Mahindra Electric has done what it could to make the e2o more attractive to city-dwelling environment lovers – more range, space and features – and the result is good. However, the truth is inescapable. The e2oPlus certainly has its head in the right place. But its heart needs to become cheaper for the sales to get a big plus.