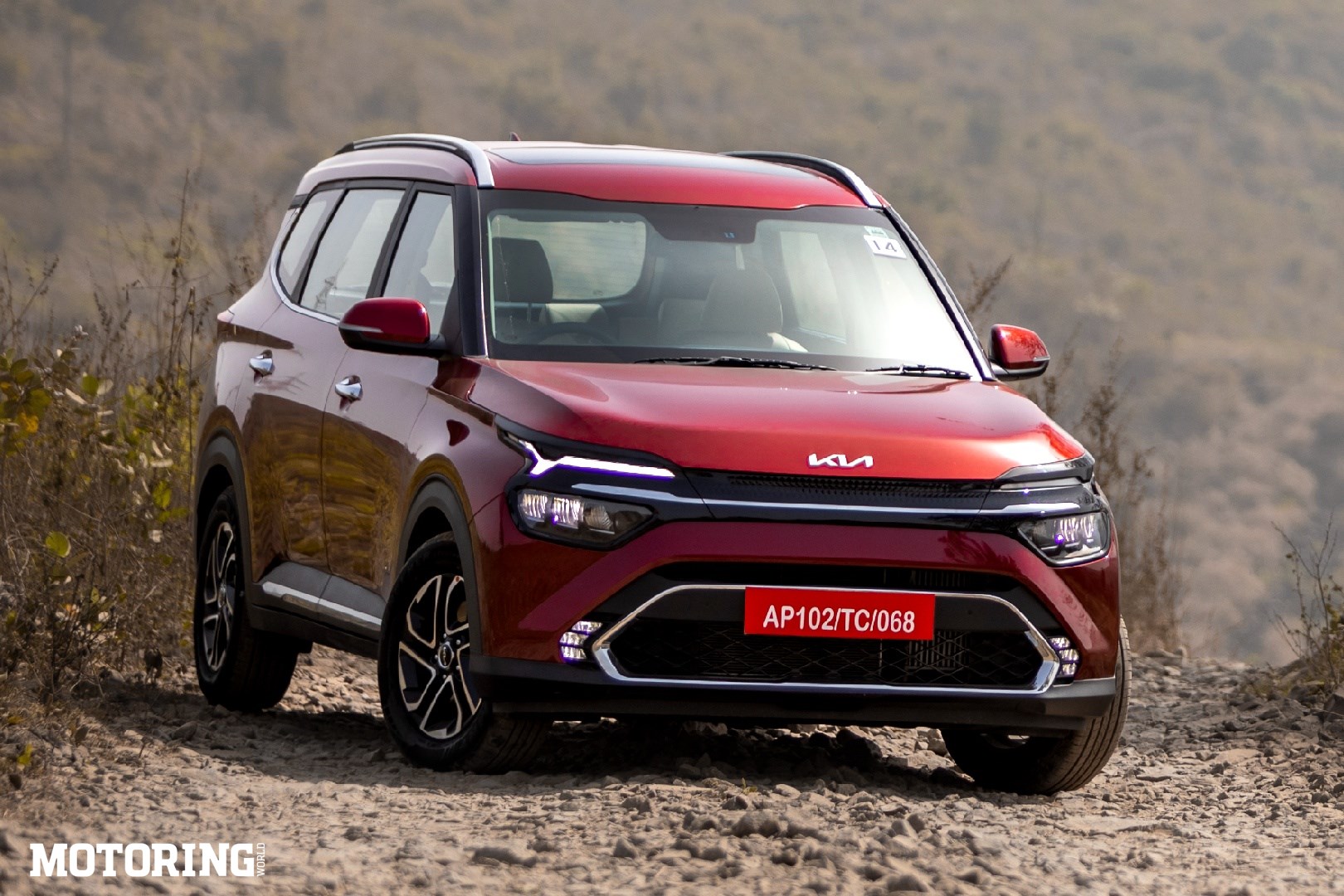 Since late December last year, Kia Carens memes have been blowing up Internet forums and the like, indicating that some people will joke about anything — and that there’s some serious interest around this new offering. The three-row segment has seen a rather sudden influx of new models and Kia’s thrown its hat in the ring with what the company calls a Recreation Vehicle. PR-speak aside, Kia has taken a slightly different route to the three-row concept, especially when seen in light of the beefier SUV-esque Hyundai Alcazar, Tata Safari and MG Hector Plus. 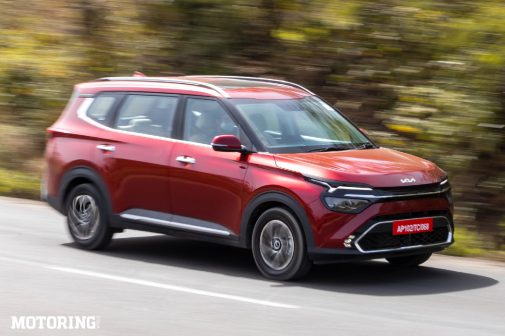 Not that the Carens suffers from a lack of musculature. Sure, it’s shaped more like an MPV — which the body cladding and roof rails don’t mitigate — but it’s still a good-looking car. There are but a handful of design elements that link the Carens to other Kia cars, which means the Korean brand has put in a bit more money to make it distinct. And it shows. The Carens is based on stretched version of the Seltos platform (like the Alcazar is based on the Creta), but other than the powertrain options and an extensive features list, the MPV is its own person.

For once, I’m not put off by the amount of chrome used, and the sharp headlights and tail-lights are eye-catching. There’s little pretence of being a SUV and the large glasshouse and slim horizontal elements — from the grille to the lights — contrast to make it look larger than it is, especially in length. That’s not to say the Carens isn’t big. It’s 225 mm longer overall, 160 mm longer in its wheelbase, and 80 mm taller than the Seltos; I did say it’s based on a stretched version of the midsize SUV. The 16-inch wheels do look sporty, though a bit small for the wheel wells.

The MPV shape is an excellent choice for liberating space on the inside, and the 2780-mm wheelbase doesn’t hurt, either. Getting in and out is effortless, even for the elderly, and average-sized people will find no lack of space in any of the three rows. Now that’s a bit of a surprise in this segment; some compromise on second-row space, while others have a barely usable last row. There’s even a decent amount of luggage space with all the rows up, which should bode well for those on a long family drive. Besides the general spaciousness of the cabin, despite the smaller sunroof, there’s more than a few storage bins. I particularly liked the pop-out cup holder for the front passenger and the storage tray under the front seat.

The Carens’s interior is inviting, thanks to the cream and blue upholstery, and the well-finished cream and black dash. The easy to use 10.25-inch touchscreen sits flush above the central AC vents, and the long-lasting quality of buttons and switches on the centre console is reassuring. The roof-mounted blowers for the second and third rows are a nice touch, but the quality of the plastics isn’t matched to every other area. The air purifier mounted on the driver’s seat back is a slightly questionable choice, too, but it doesn’t eat into space, which is good.

The Carens you see here is the range-topping Luxury Plus trim, and is the only one available with a six-seat layout, which means you get comfy and adjustable captain’s chairs in the middle row. It also means that there’s a sweet-sounding Bose speaker system, connected-car tech, 64-colour ambient lighting, auto climate control, cruise control, and electric-seat tumble for the second row. It’s worth mentioning that regardless of the variant, Kia will provide six airbags, rear disc brakes, and a tyre pressure monitor.

So far, there’s very little in terms of overlap between the Carens and the Seltos, and like I said, it’s not everyday that you see a manufacturer go that extra distance. On the other hand, it’s startling that the Carens drives in a manner that will be familiar to anyone who has piloted the Seltos. Yes, the MPV does share its powertrains with the SUV, but it also carries significantly more bulk. I do feel that loaded up with six or seven, and some luggage, the Carens will feel sluggish, irrespective of the engine under the bonnet.

Though I didn’t get a chance to drive it, it’s highly likely that the 113-bhp 1.5-litre petrol engine will just be adequate for city use. And that’s based on the performance of the more powerful 138-bhp 1.4-litre turbo-petrol unit and the torquier 113-bhp 1.5-litre turbo-diesel engine. Even the 7-speed dual-clutch automatic gearbox that comes with the turbo-petrol engine feels like it’s been tuned for a more relaxed drive. Sport mode does deliver a marginal dose of alacrity, but this is not a car that’ll be used for anything even slightly sporty. Don’t let the paddle shifters fool you.

For what it will be used for — transporting more than five people in comfort and relative silence — the Carens has just enough go. The turbo-petrol is what I’d recommend for those with more urban driving. Just don’t expect double-digit fuel-efficiency figures if your route has a lot of stop-go traffic. The diesel is a capable highway cruiser and impresses with how far it’ll stretch a litre of fuel, and in these times, that’s commendable. Whichever transmission you pick — a 6-speed manual is standard across engines, while the diesel gets a 6-speed auto option — just be gentle with your right pedal and things will go smoothly. Plan an overtaking manoeuvre a bit in advance and you should be fine.

Another reason why I’d recommend a relaxed driving style is handling. The Carens is obviously not meant to thrill around a set of bends or perform slaloms through slow-moving trucks at high speed. Not that straight line high speed is an issue. The suspension provides a sufficiently cushy ride no matter the speed, though some rumbles filtered through the comparatively stiffly sprung diesel model. What also helps ride quality are the high profile 206/65 R16 tyres. With lighter loads, the all-round disc brakes seem good enough, though a full load might change that. 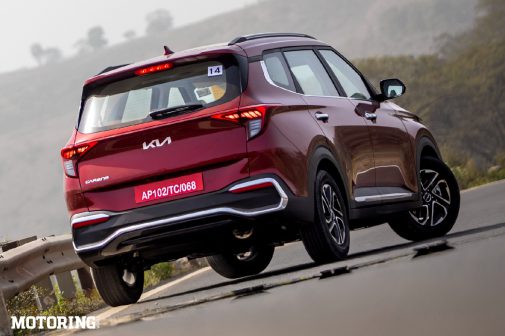 All in all, the easy to drive, comfortable, spacious, and oh-so-convenient Carens really does seem to be another success story in the making for Kia. Considering the Rs 8.99-16.99 lakh, ex-showroom, India, price tag, the brand’s fourth offering in the Indian market will shake up the status quo in the three-row segment. I like that Kia’s diligently doing its homework before it comes out with something, and it shows in the way that the company’s sales figures are among the best in the country. Here’s hoping there’ll be something with a bit more pep in its step coming from the brand soon with the same ethos.