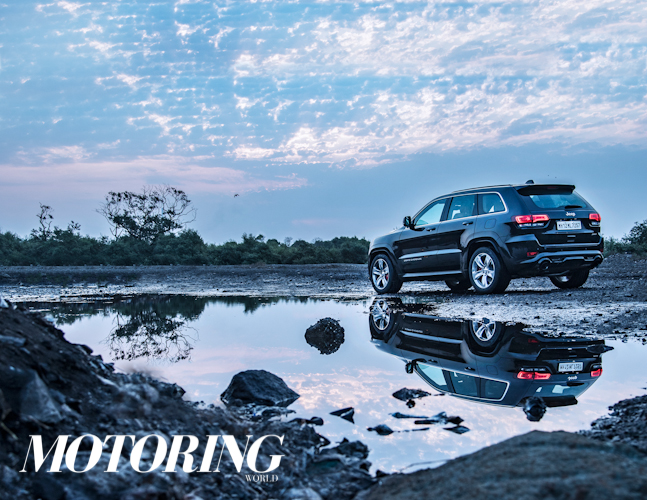 A cloud of black dust shadows the Jeep Grand Cherokee SRT. Its shiny chrome wheels tiptoe through peculiarly metallic sludge, the nails and bolts concealed within being shot off like shrapnel under its girth. We’ve stealthily stationed ourselves at Haji Bunder – the monochromatic backstage of Mumbai’s industrious history – well before sunrise. In the distance, the fading twilight reveals the silhouette of a barge, motionless and abandoned. There’s an uneasy calm in the air, as if something terrible were about to happen. It’s depressing.

I scare myself silly as my foot slips onto the throttle pedal (when parked, thankfully), causing the V8 to rock the vented bonnet from side to side, emitting a muffled rasp. The last traces of sleep have escaped my eyes in a jiffy and I’m sitting straight up, hoping I haven’t alerted anyone of our presence. We’re not exactly supposed to be here, not with Kartik’s snooping telephoto lens anyway. The SRT’s haunches look imposing but discreet, its lustrous black paintwork contrasting subtly against the expanse of dull charcoal that has engulfed every inch of the dark side of Mumbai’s coastline. This soil hasn’t seen chrome as rich as on the SRT’s 20-inch wheels in a long, long time and the polarity between the Jeep and its environment is extreme. Distant as the past is from the future.

As the skies open up, the SRT’s tightly-reined-in lines lose cover. It’s a seriously good-looking machine, contemporary but not overdone. The seven-slat grille with its chrome accents adds a hint of urban bling and the DRLs highlight its millennial bloodline. This is a car that’s designed for today and not so much for the day after. Every aspect of its design, from the front end to the profile and its relatively docile rear, makes this very clear. The only SRT additions to the GC’s exterior package are a lowered lip, a tailgate spoiler and the red Brembo callipers. Subtle! It doesn’t exactly stand out in a crowd like a Range Rover does, mind you – especially not in this shade of black – but it does look, umm, expensive. I’m sure you’ll want that, too.

To be honest, it wouldn’t have mattered if the SRT was painted the colour of fungus or if it had an octopus for a hood ornament. This car is about what’s stowed away under the hood – the 6.4-litre Hemi V8. Before you shout ‘Hellcat!’ let me tell you it isn’t one. It’s the relatively tamer version of Chrysler’s eight-cylinder petrol motor which produces 468 bhp at a pretty heady 6000 rpm. All right, so that’s not really a number that’ll give your eyes hernia, but consider that it generates 65 kgm of torque, has a sports mode, paddle shifters and launch control, and the fear starts creeping in. We’re talking about a car with off-roading genes that weighs in excess of two tonnes, after all.

Fire it up and the naturally-aspirated engine growls momentarily, the hood quaking under the associated tremors. Engage sport mode on the Selec-Track driving mode dial, build up revs and dump the brake – what happens next will blow your mind. Okay, sorry about that clickbait expression, but really, the SRT accelerates in a manner its looks completely belie. You’re pushed back into your seat with far higher intensity than you experience in a jet at take-off and the rate of progress is relentless. What’s really impressive is the 8-speed automatic gearbox with a manual (paddle operated) override which offers lightning quick shifts – and this is no exaggeration, honestly – and used over clean tarmac, the SRT can go from 0 to 100 kph in a shade over 5 seconds. If you’re the adventurous sort, you can also slot it into Track mode, which turns the ESP off (also disengageable via a button on the dash), but that mode, as the name suggests, is best left only to the racetrack.

Wait, taking a Jeep to a racetrack is like going to a child’s birthday party in a Halloween costume, right? Wrong. Having spent a weekend at a Jeep drag racing event at the Yas Drag Center in Abu Dhabi once, I can tell you that the Grand Cherokee SRT is built for that kind of stuff. With lightly modded cars doing the quarter mile run in under 9 seconds, you can tell how potent the SRT is. Rolling burnouts, a deafening growl from that intense V8 under hard acceleration and crackling bolts of thunder from engine overruns – the SRT is a muscle car on steroids, if there can ever be such a thing. And the one I’m driving here isn’t even the 707-bhp Hellcat version, also scheduled for an Indian debut later on in the year!

Oh, and it can handle exceptionally well. No, not exceptionally well ‘for an SUV’, but in a more universal sense of the term. It doesn’t say so anywhere on its brochure and neither does it wear a Porsche badge, so you go into a corner expecting it to roll over onto its side, but that just doesn’t happen. It sticks to its line, the 295/45 R20 tyres barely stressed under the force of its momentum and although the steering is on the lighter side, you can trust it to get on the exit exactly where you want it. Lift-off oversteer comes in most progressively, too, and the supercar owners amongst you will appreciate this immensely. Rather than feeling like a by-product of electronic driver assists, the SRT’s dynamics come across as the result of insightful engineering and we can never have enough of that, can we?

The best part is, despite being quick and sharp, it never once feels even a touch too impractical. You’d imagine it to be hard to live with, but that’s not the case. The SRT is an impressive daily driver and as ridiculous as it may sound, it’s true. You can forget about accelerating hard and just feather the throttle, maintaining revs under 2500 rpm, and the SRT transforms into something like a BMW 5 Series on stilts. It’s plush, comforting and unstressed, and a lot of this can be credited to the naturally aspirated V8 as well as the terrific suspension. The ride quality is exceptionally good and while you will most definitely hear the SRT going over the worst of potholes, you won’t feel much at all. It really is a supercar you can drive to work, five days a week.

In a supercar, you are expected to fold yourself into half because of its low stance and a gimmicky door opening mechanism. You have nowhere to place your Starbucks decaf and your children have to be barbequed in the engine compartment. But with the SRT, you don’t have to worry about any of this. You can sit snug on sporty but elegant (and vented) leather-wrapped SRT-spec seats, drown out the noise with the fantastic Harman Kardon speakers and motor along, over the worst this country’s roads can throw at you without a care in the world. Of course, everyone in the world will think you have made major contributions to the world of rap music, but it beats having to wear those silly driving shoes all the time, right?

So, is the Grand Cherokee SRT the car you must choose to burn your last litre of petrol in? Well, no. There are far more dramatic cars in the world that deserve that honour – I’d burn mine in a Ferrari F40, for instance. However, while the extinction of petrol is inevitable, it will take a while before that reality descends upon us. So what does one do until then? You could get on with your life and pretend to be shattered when the news drops in or you could drive the Jeep Grand Cherokee SRT and make that day come sooner. The choice is simple and so is the verdict. If your childhood dream is to drive the Ferrari F40, buy the SRT. It’ll make your dreams come true and you’ll have a ball until the inevitable happens. Godspeed.