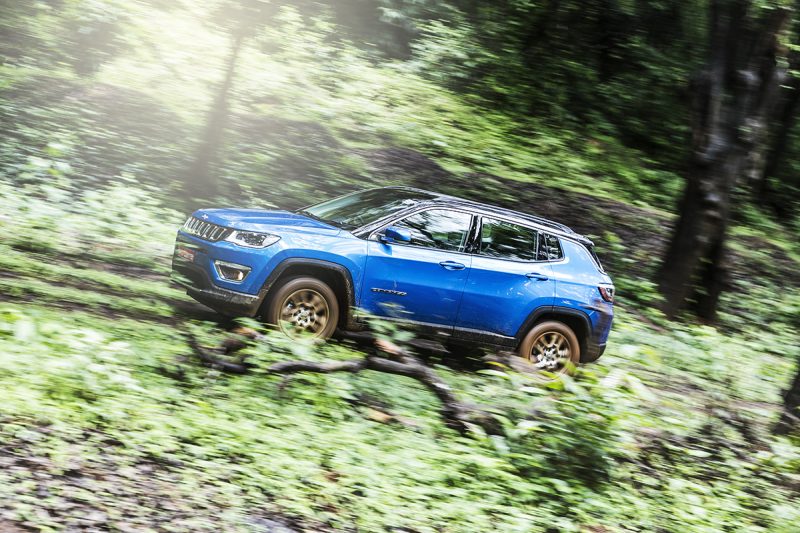 For starters, straight down the steepest wet-and-muddy slope in recent memory. The past half an hour had seen the all-season tyres get caked with mud and I imagine they provided a level of grip that reminded me of my cats trying to run on a tiled floor. However, Mud mode was in total control as it fired off frantic electrons to each wheel, ensuring that we made it safely all the way down, slipping and sliding, yet always composed. And it was then that I concluded, ‘Yup. This is a Jeep, all right.’ And quite an apt name it has, too, seeing as it always pointed the right way.

The Compass is more than just the new Jeep on the block. Its importance is also measured by the fact that it’s the first Jeep to be built in India, making our land one of only four countries in the world that can lay claim to that distinction. What’s more, all right-hand-drive Compasses for the rest of the world will be made in India, too, which underscores the significance of this SUV for Fiat Chrysler Automobiles. And finally, given that it will be more affordable than its brethren that arrived before it, the Compass will probably be the best-seller for Jeep in India. Is that a lot to expect from even a new Jeep? Nope. Not when there’s a plastic lizard moulded into the plastic under the driver’s side windshield wiper.

Okay, that’s a joke, but not really. There really is one of those on every Compass and in the right light, it has the potential to extract magnificent shrieks from unsuspecting people. Less realistic but just as curious is the serpent-like creature printed on the rear windshield. On asking Mark Allen, head of Jeep’s design department, I learnt that it’s the Loch Ness monster, though he wouldn’t tell me why those things are on the Compass. All Jeeps have these little ‘Easter eggs’ as they’re apparently called, but no one knows why exactly they’re there. Good-luck charms for the wild, perhaps?

Whatever the case with those eggs may be, the rest of the Compass doesn’t leave you scratching your head. It looks like a scaled-down Grand Cherokee and that’s exactly what it’s supposed to do. There was a long presentation about the Compass’s design, but all I remember is that the wheel arches are designed to evoke the very first Jeep’s squared-off ones. Nice nod to history, that. The front is unmistakably Jeep, too, with that seven-slot grille declaring its lineage. The rear, though, could be off any modern SUV from anywhere in the world if it wasn’t for that bright Jeep logo on it. However, that’s a subjective thing, and overall the Compass looks muscular and very Jeep.

The interior may not be as striking as the exterior, but it is still a pleasing sight and it feels good. High-quality materials greet your hands everywhere they go and it’s all neatly laid out, too. You won’t select Snow mode when all you wanted was to increase the music’s volume. Also, the well-designed infotainment system will bring out the fiddler in even the most stoic characters. There are more features in there than I can count, so I won’t start on them. But I did like the dedicated mode for a full-screen digital compass, and I left the 7-inch screen in said mode for all of my time in the car even though I knew where I was going. Something right about that, you see.

What’s also right is how the Compass feels to drive. The 2.0-litre 171-bhp diesel motor is a relaxed revver, preferring to amble along rather than leap forward. But if you step on its tail, it will do a respectable job of scaring the passengers with its speed. Gearshifts feel… substantial. No, they aren’t notchy or clunky, but the lever does feel rather nice and… substantial to wield. No problem with precise shifts, either. I suppose it’s a Jeep thing and I, for one, quite liked it.

The 6-speed manual gearbox is matched pretty well to the torquey motor, though I suspect that given a wide open road, the Compass will likely convey its preference for calmness under the hood. Perhaps it’s the relaxed motor or perhaps the quiet cabin or maybe both, but the Compass really does feel like it’d rather chill out and cruise along, staying away from its redline as much as possible. This is not a problem, mind you, just the way the Compass likes it.

The Compass’s ride quality is excellent and that’s not really a surprise coming from Jeep. Bumps and potholes are brushed off without fuss, while its stability keeps it from going all over the place. The Compass is great on highways, but it doesn’t lose its bearings on twisty roads, either. And that did surprise me and shock the passengers – its handling. Yes, handling. Now, I don’t mean that this is your next track-day tool, but the Compass proved to be quite fluent in the language of cornering. It holds a line pretty well and the brakes haul you out of trouble when it comes along. There is body roll, but way less than I expected and it’s certainly nothing to worry about. The steering is well-weighted, but doesn’t provide as direct a connection to the front wheels as I’d like. Then again, I suppose that’s too much to ask from an SUV. I kept forgetting that this was one. Until we went off-road, of course.

Given its great on-road behaviour, I expected the Compass to be a bit of a compromise on the rough stuff. However, while it may not be a Wrangler, it still is a Jeep, and it will outrun everything in its class off the road. The off-road modes masterfully wield the 36 kgm between the four wheels, even as you realise why that first gear feels a bit short for road use. It’s the torque and the electronics that keeps the show on the road off the road. We climbed up stony slopes, slithered through mud trails, splashed along a river, went over rocks and logs, and the Compass did not miss a beat. Well, except once that I stalled it, but it wasn’t my fault; you see, the Compass was doing everything on its own, so I forgot that I was driving a manual and expected it to change gears on its own, too.

And that’s the Compass in a nutshell. It’s a vehicle that knows what it’s doing and where it’s headed. Yes, I’d have liked to see paddle shifters, given the way it motors along a twisty road. Yes, I’d have like a giant sunroof, too. Yes, I still have a Tiguan hangover. But the Compass is still a fantastic SUV, one that comes from a family rich in both history and technology.

However, until the final piece of the puzzle, the Compass’s price, falls into place, I shall refrain from writing any judgements in stone. I must add that it’s unlikely that FCA will get its pricing wrong, given that it’s made in India and, more importantly, given the reaction its pricing of previous models got. Rumours at the drive pegged the Compass to be priced between Rs 18 lakh and Rs 25 lakh, depending on engine and trim options. However, a compass doesn’t speculate and neither will I. After getting a taste of what it can do, all I can say is that the Compass is a step in the right direction.