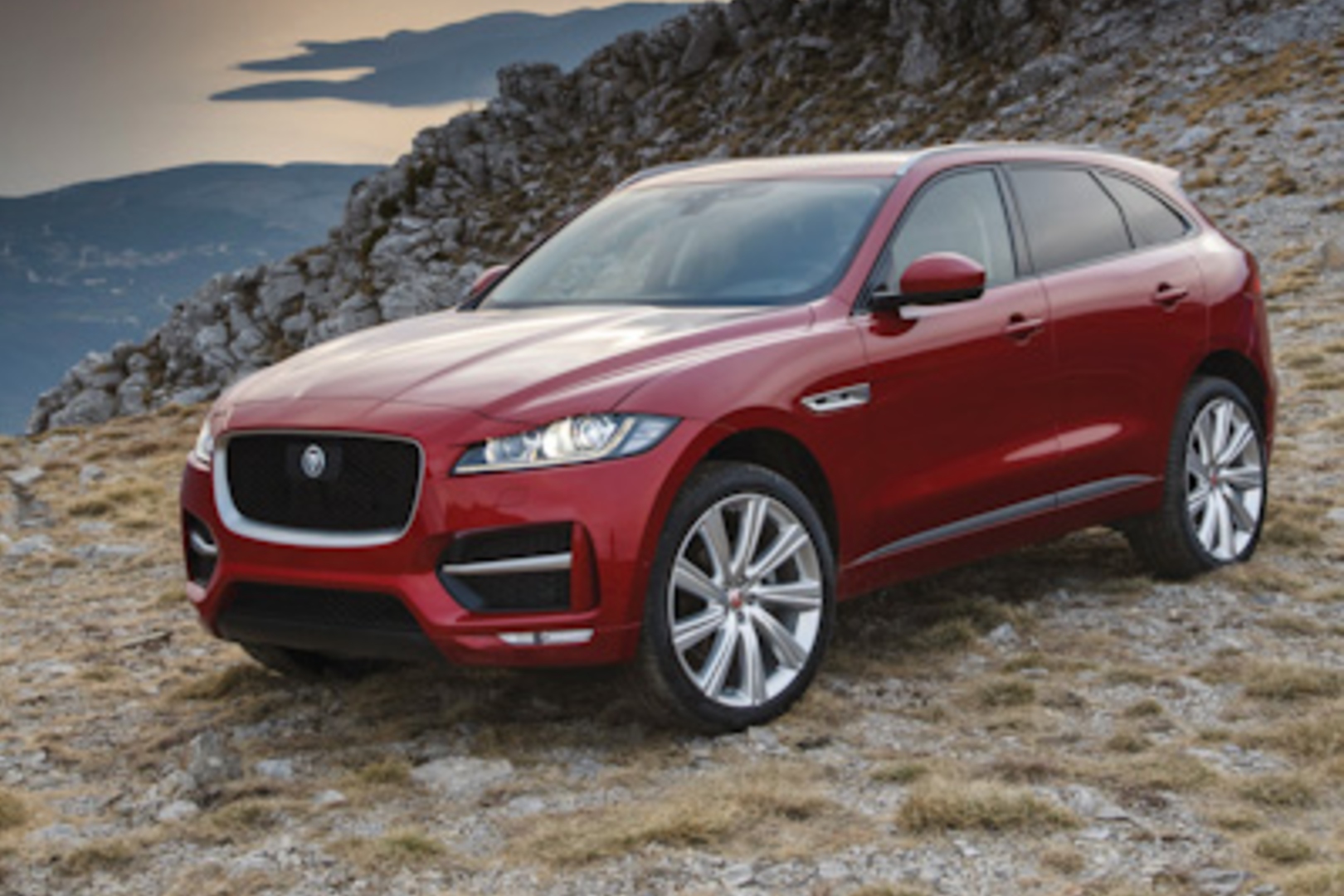 Can you imagine the look on the faces of Porsche-philes when they first saw images of the Cayenne in 2002? A brand known for building some of the best boxer-engined sportscars in the world had suddenly decided it wanted more drivers, sat higher up, but with the Stuttgart crest on the nose. Mortified, those few certainly were, not the moneybags in Los Angeles, London or Hong Kong; SUVs had become the flavour with the German brands a few years prior. Mercedes-Benz, BMW and Volkswagen had their own interpretations, while further up north, Volvo had just released theirs and Audi was waiting in the wings. Brands and their lofty ethos were washed away by bottom lines and volumes. The stage was set. 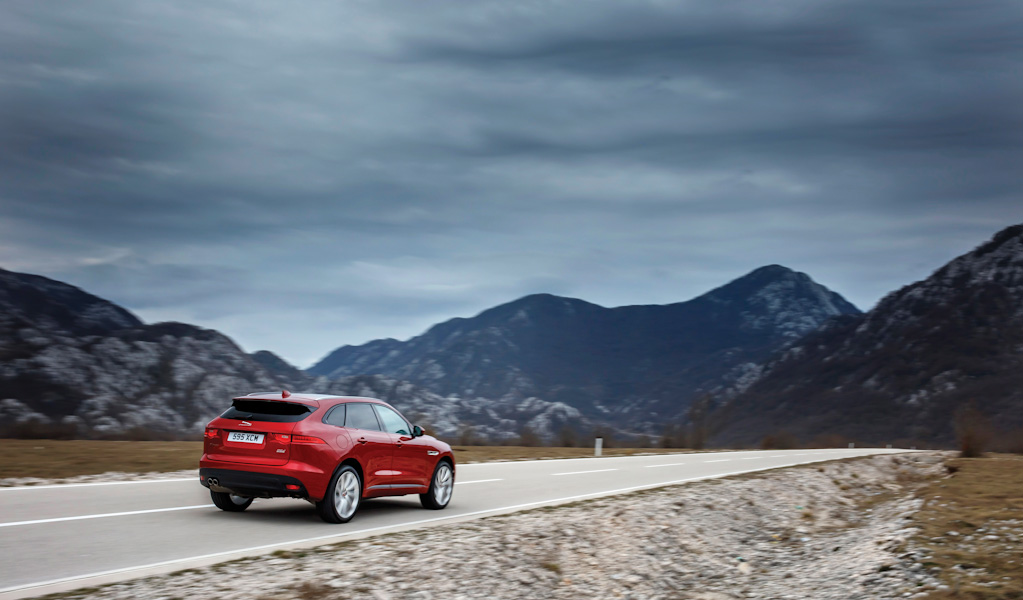 Today, you no longer react to the Bentley Bentayga, Maserati Levante, Rolls-Royce Cullinan or Lamborghini Urus with the same level of disgust or repugnance. The expectation that Jaguar would launch a crossover should therefore come as a surprise to no one, at least going by the script. Yet, it raises eyebrows because Jaguar is part of JLR and LR is Land Rover, the best known SUV brand in the world, apart from Jeep. So why should Jaguar need to make an SUV nee crossover? The answer lies in two words — business sense. Aware that it can’t rely on sedans and sportscars to help it take on its European rivals, Jaguar operations need to come out of Land Rover’s shadow. The volumes simply don’t add up for Jag and a crossover could help it gain decently in  that respect.

The F-Pace is also Jaguar’s biggest challenge, because while the market might be in an SUV frenzy, Jaguar’s own history is awash with failures whenever it tried to step away from its traditional strengths. The X-Type and XJ220 come straight to mind, as does its foray into F1. So the F-Pace need not just be a good piece of kit, but a bit of a rabble rouser in a world filled with de rigeurs. 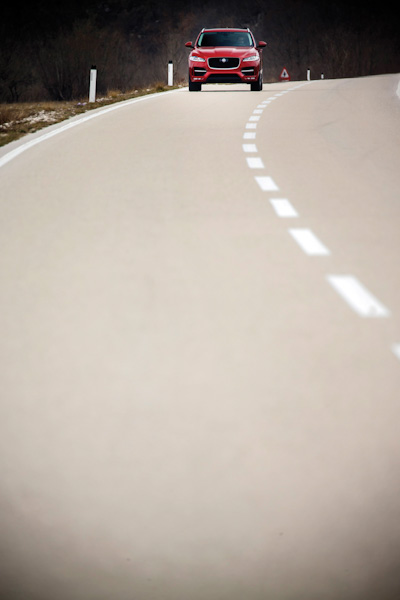 At first glance, it seems to have got it right. The F-Pace is by far the best looking of its kind. And its lot includes the Audi Q5, the BMW X3, the Volvo XC60, the Mercedes-Benz GLC and the Porsche Macan (see Competition Check) at the top. It sits on a wheelbase that’s longer than the Macan; as a result stretching out the body lended itself to a lovely slingshot roofline that nicely encapsulates the smallish rear glass. The aim right from the word go was to ensure it looked like a Jag and that you won’t mistake it for something else from even 200 metres away. Ian Callum and his team managed to do just that, retaining the face as well as tailgate treatment from the XE and XF. None of which compromises on the interior packaging, but more on that in a bit.

The foundations for this design lie in Jaguar’s own principles of construction. Since the start of its new-generation Lightweight Aluminium Architecture with the XE and new XF (that’s India bound later this year), the F-Pace has taken things further. With 80 per cent of the body constructed using aluminium, its 1.66-tonne kerb weight doesn’t make it light as linguine, but that doesn’t stop it from being about 10 per cent lighter than its German rivals.

Now that the business case is set, let’s tell you the single most important thing about the F-Pace — it’s a Jag, through and through. Its 80 per cent aluminium construction is the highest on a Jaguar to date. Right up to the B-pillar it shares a fair chunk of the structure with the new XE and XF, thanks to the common platform. It does use steel for the doors and some other parts, a crumple zone beam made out of magnesium and a composite tailgate. The focus has been on a BMW-like 50:50 weight distribution and it’s very nearly there. 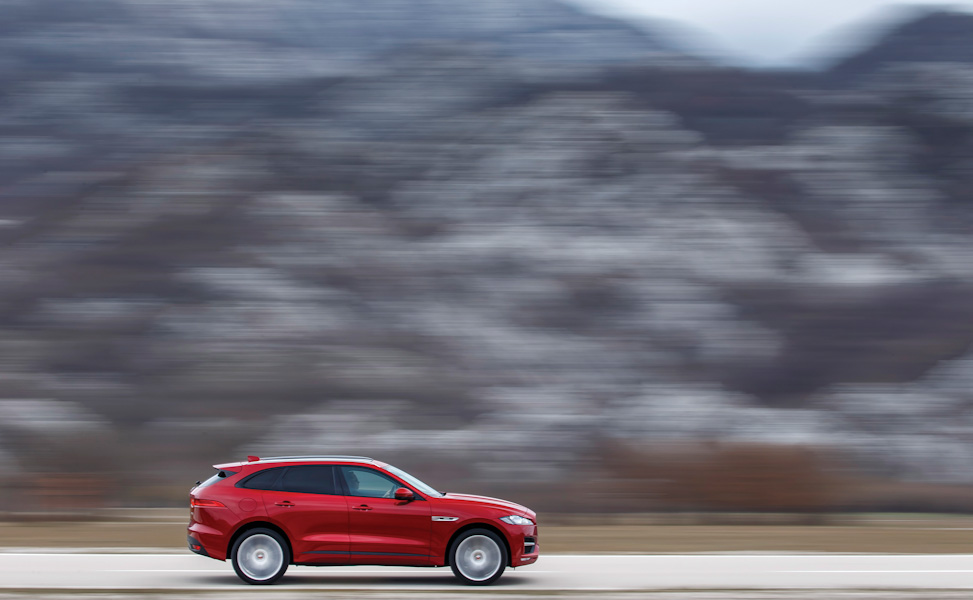 A sporty crossover needs sporty engines and the F-Pace has it in its repertoire, except that it has to make do with an entry-level motor as well. On the top of the heap is the 3.0-litre, supercharged V6 with 335 bhp and a 375-bhp version badged the S. Neither of them will be making it to India when it’s launched later this year. Instead, Jaguar will focus on the 3.0-litre diesel motor from the 2016 XJ (297 bhp/71.4 kgm) and the base 2.0-litre Ingenium diesel with 178 bhp and 43.8 kgm.

The Ingenium replaces the older Ford-derived 2.2-litre motor and the timing couldn’t be more right, considering the fracas over 2.0-litre-plus engines in the National Capital Region, one of India’s biggest car markets. Mated to the 8-speed ZF motor, the engine has a relatively linear torque curve, with the entire shove coming in at about 1750 rpm. The F-Pace will be the first JLR product in India to benefit from this engine, with the XE, XF and Discovery Sport to follow suit. 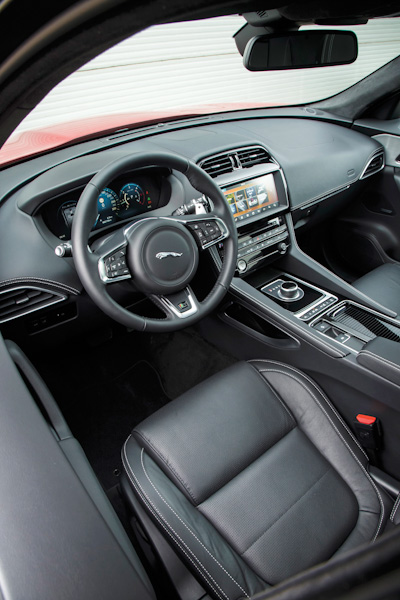 As motors go, this is the one that ‘does the job’. Its lower emission ratings as well as frugal sipping habits will find takers in most parts of the world, but it isn’t without its flaws; primarily, the motor feels a bit gruff and noisy. By itself, it does feel pretty linear, but it’s still a bit off the brilliant BMW 2.0-litre diesel, especially in the way it piles on speed. NVH is a tad on the higher side, but what makes this powertrain shine is the gearbox. With the available power and torque, the gearbox and its spread-out ratios do a good job of keeping the vehicle in the hunt, even at speeds of 110 kph in eighth gear. By working on reducing frictional losses, JLR have made the motor pretty efficient at most real-world speeds, something the 2.2 never quite managed to be. 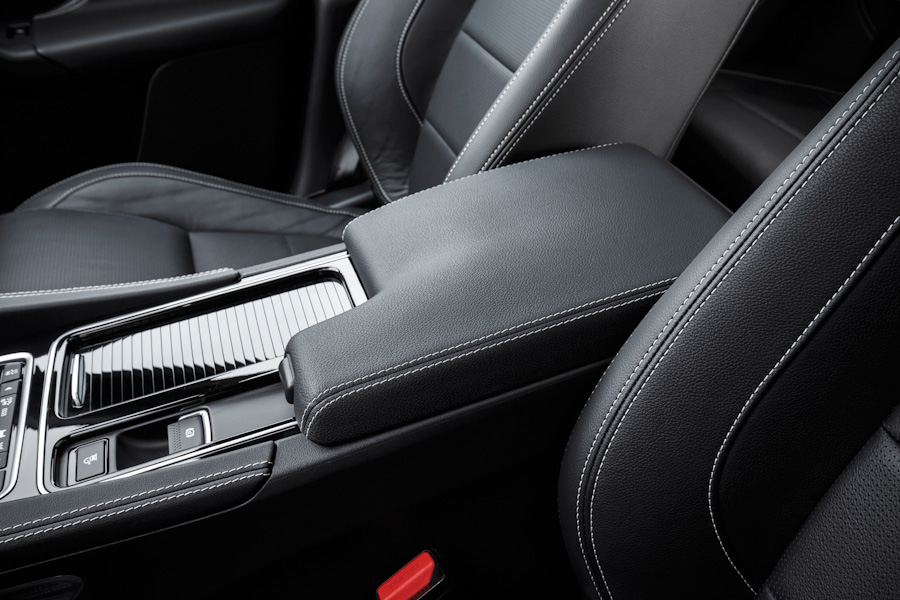 In sharp contrast, the 3.0-litre diesel is a veritable driver’s delight. Sat on 21-inch wheels, the motor has two very good characteristics — a flat torque curve and a rev-happy motor. The zingy nature of the motor and the overall high refinement put it among the best 6-cylinder diesel motors on the planet. Use Jaguar Drive Control to select Dynamic mode and the motor response gets sharper and crisper, the gear changes a wee bit more alive and the car’s steering heftier.

As a dynamic package, the F-Pace can very much play along with the Porsche Macan. In Dynamic mode, the steering has better weight and has some feedback on offer, too. Unlike the Macan, whose steering can feel a touch lifeless at times, this one has the better of it, although not entirely as convincing as its saloon brethren. Body control is neat, with only a smidgeon of body roll being noticeable, which probably can be attributed to a softer suspension setting. The benefit in return is that at low speeds, the ride quality is excellent, ironing out minor bumps and ridges with ease. Even as speeds rise, the ride quality is relatively flat, with no excessive steering chatter to accompany. This really is a fine dynamic package and probably more India-friendly than the Macan. 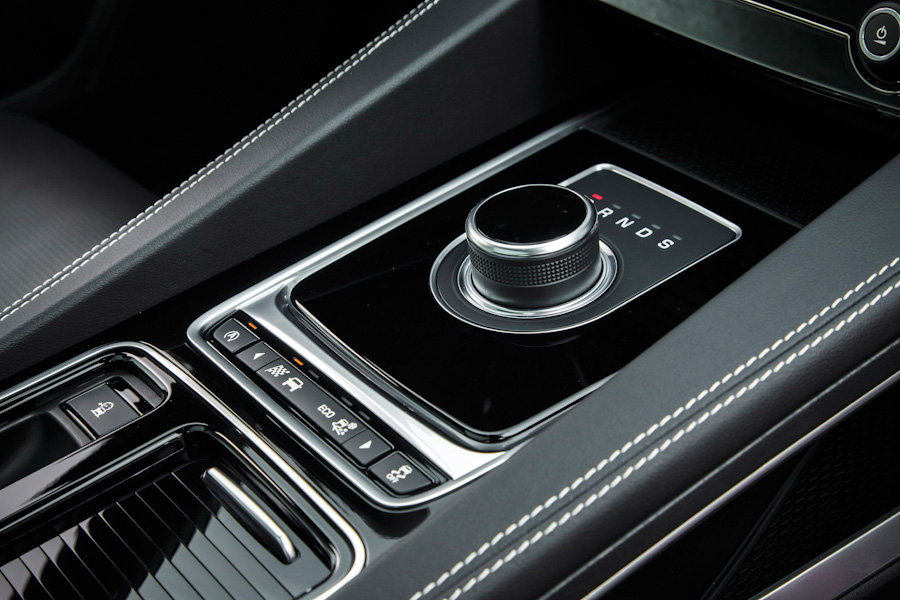 It even does off-road rather well. Benefitting from Land Rover expertise, it has pretty good traction off-road and the approach and departure angles are competitive enough to take the F-Pace off the beaten path with little worry. And there’s enough tech in it, too. We tried out the All Surface Progress Control on a slushy hill section in combination with Low Friction Launch. Both systems essentially take control of throttle and brake functions leaving only steering control at the hands of the driver. Selecting a desired speed using cruise control, the F-Pace managed to climb the low-traction surface with ease, applying throttle by itself whenever the wheels detected higher level of resistance. On a downslope, it automatically selects a speed of 3.6 kph, pretty much functioning like hill descent control. 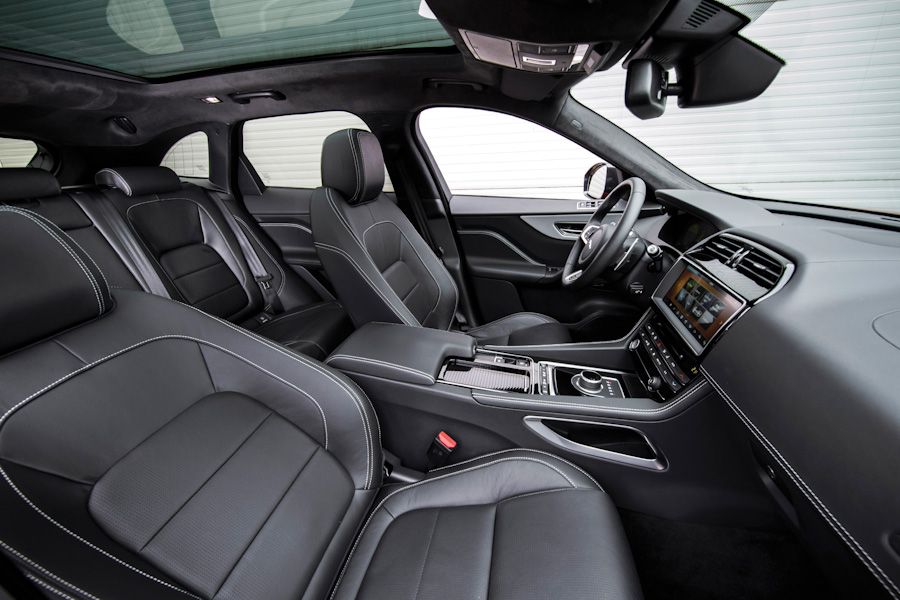 If you must find reason strong enough to select the F-Pace, the interior is probably it. There are some low-rent plastics that reside out of your line of sight, but apart from that the quality is pretty good indeed with plenty of toys to entertain you. The 10.2-inch touchscreen not only is easy to use, it also has a superfast processor, modem and a 100 GB solid state drive. From selecting driving modes to accessing music, 2D and 3D maps and more, the list of menus and sub-menus is massive. The only trouble is that despite its great performance, it can take a touch too long to boot at times, as we realised on one of our test cars. Let’s hope it was a one-off anomaly and not a common one. What makes the F-Pace more than just a low-slung SUV is the space on the inside. Sitting on a longer wheelbase than the Macan, there’s ample head-room, leg-room and knee-room and in fact, three abreast seating is very much possible indeed. 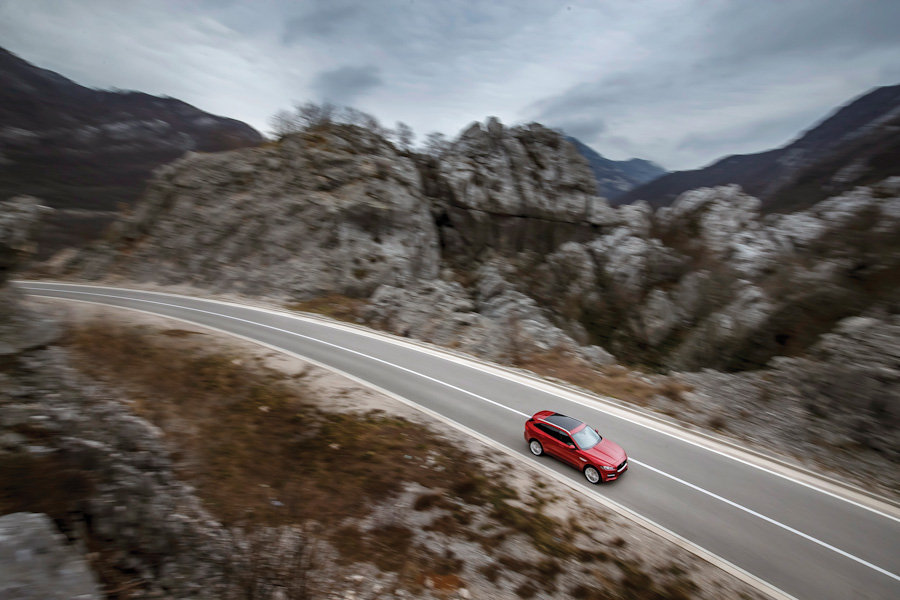 The F-Pace is a well-driving, good-looking car with lots of features and its off-road capability and sense of interior space are cherries on top of the cake. A cake that will be priced at a premium over the Audi Q5/BMW X3 but well below the Macan, despite being a completely built unit. Our guess (and hope) is that JLR will price it at Rs 60-65 lakh for the 2.0-litre, going up to Rs 80-82 lakh for the 3.0-litre diesel, ex-showroom. If that’s indeed the case, it’ll sit at a slight premium over the Range Rover Evoque and nicely plug a gap that exists in the family. The F-Pace, then, would very well be the best Jaguar on sale in India.