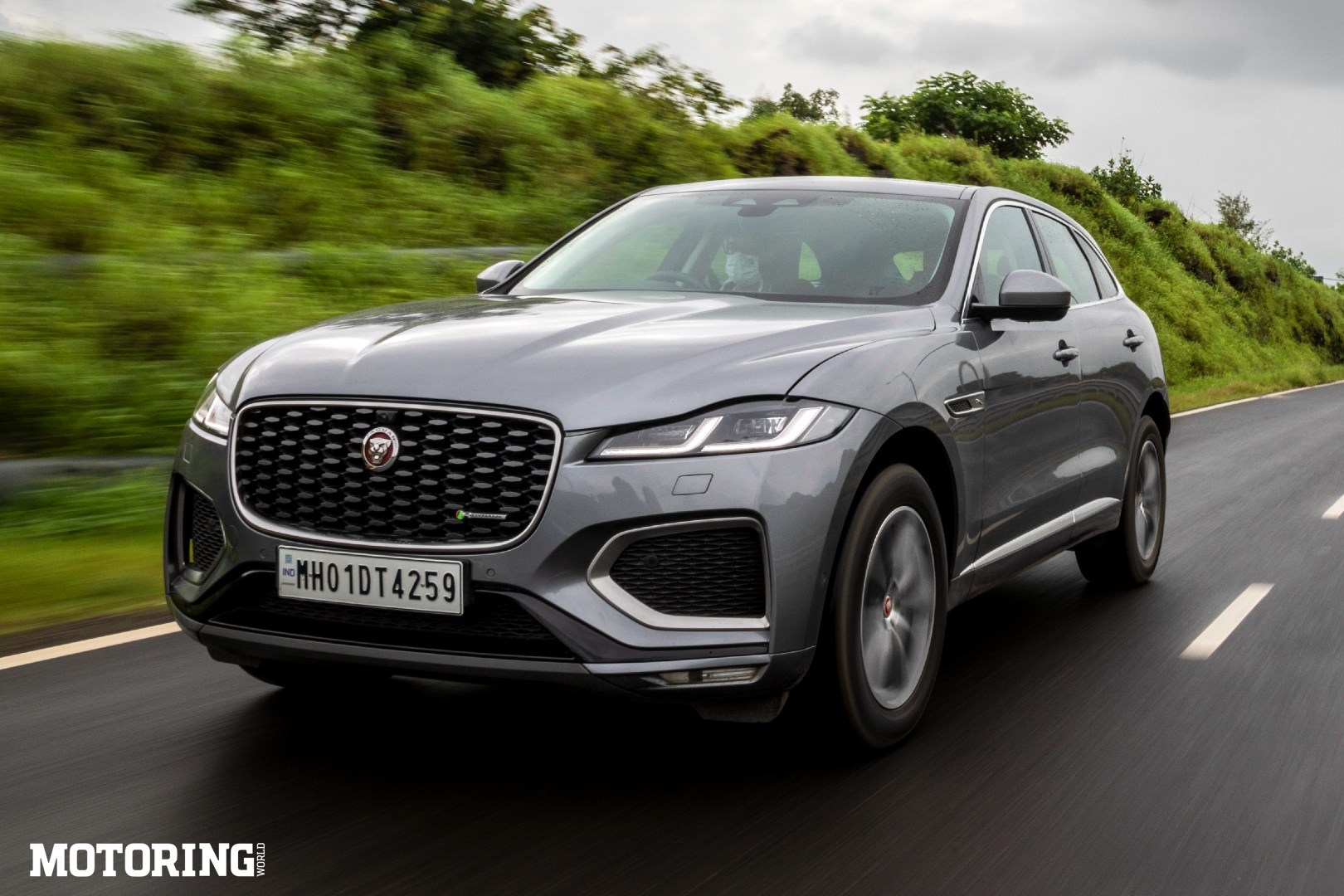 Say it with me slowly — Jaaaaag. If the voice in your head didn’t sound like Jeremy Clarkson, then you haven’t quite got the right idea. Let me explain. Although Clarkson uses the slang as a double entendre (referring to a Jaguar owner who is sleazy or old), there’s a hint of, ‘Yeah, but that’s what it’s all about and we like it.’ From time immemorial, a Jaguar has stood for desirability, a seductive design, and a knack for taking corners in a way that makes drivers grin, all the while cocooning occupants in comfort. So does the recently updated Jaguar F-Pace meet these criteria?

Even when the pre-facelift model had arrived in India back in 2016, there wasn’t a shred of doubt in my mind that Jaguar’s first SUV looked the part. However, the most recent update enhances its appeal significantly. By enlarging the grille, slimming down the all-LED headlights and adding beefier bumpers, the F-Pace now looks wider and more muscular, befitting the role of Jaguar’s big SUV. The new I-Pace-inspired tail-lights look nothing less than stunning and add depth to the boot area. Despite the obvious bulk, there is a svelteness to the F-Pace’s design that only a Jag has, although it is less striking than some of its stablemates. There’s almost a subdued air around it, hinting that this may be more or less than a usual Jaguar sedan or sportscar. The fact that the twin-five-spoke 19-inch wheels are the same as the ones before isn’t necessarily a bad thing as they do suit the F-Pace.

Step inside and you immediately find yourself in a sporty yet comfortable cabin, and this is a marked improvement over the previous model. The use of red leatherette on the seats, the dash and the doors looks and feels plush, while still marking it out as sporty. There’s an elegant simplicity to the interior of the F-Pace and material quality is generally good, though the quality of the plastic used to make the little R Dynamic logo on the steering wheel isn’t up to the rest of the cabin. Touches of aluminium on the steering, centre console, door handles and dashboard do add sophistication, while the red stitching on the dash also adds a bit more sporty panache. The stubby gear level is nice to hold, too, but is rather delicate and shifts at the slightest of hand motions.

Although the seats, both front and rear, are comfy and offer plenty of support the F-Pace’s contemporaries in the segment get more adjustability for the front ones and get one rather crucial feature that is an absolute boon on hot days — ventilated seats. The rear seats electronically recline to an appropriate angle, but the button to recline the seat is a bit hard to reach, seeing as it’s tucked away between the rear seat cushion and the door. Space for three in the back is limited by the plushness and in fact, overall space seems to be at a slight premium for a car this size. Conversely, the boot is massive and with the rear seats folded, you could get 1842 litres of space, which is nearly enough to move houses. 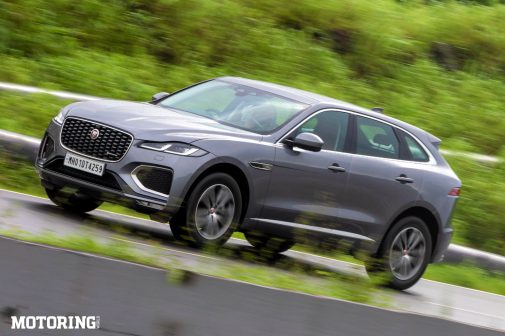 When one is paying Rs 69.9 lakh, ex-showroom, India, for an SUV, one expects certain features, tech and creature comforts. The aforementioned lack of cooled seats is one, the manual adjustment for the steering column is another, and then there’s the lack of wireless Android Auto and Apple CarPlay. On the other hand, the digital instrument cluster, which is easy to read, is configurable and informative and the 11.4-inch touchscreen infotainment system that runs on updated software is brilliant to use. It’s a far cry from the previous model’s InControl Touch system. And when it’s not accentuating the engine’s note (only when in the Dynamic drive mode), the Meridian sound system is a joy to listen to. Other noteworthy features include four-zone climate control, a two-pane panoramic sunroof, wireless charging, a powered tailgate, and a 360-degree camera. 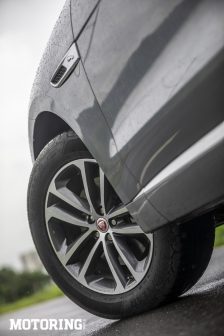 What really makes the F-Pace a Jag is the way it drives. Sure, the 2.0-litre inline-four turbo-petrol engine, which makes 247 bhp and 37.2 kgm, feels a bit underpowered for this 1.8-tonne SUV, and isn’t the most refined of its ilk, either. Still, there’s an adequate amount of shove when needed and that’s mostly down to the smooth-shifting 8-speed automatic gearbox. This unit is far quicker and more effortless than the one on the previous F-Pace and it shows when a bit of spirited driving is called for.

In Dynamic mode (the obvious choice when you’re in the mood to up the pace), there is a sprightliness not felt in Comfort or Eco modes. The F-Pace picks up its not insignificant skirts and hustles in this mode, making it a genuine pleasure to drive. You’ll find the Comfort mode to be just about adequate for most drives, whether in the city or out on the highway. In case you’re in the frame of mind to rough it out, the Land Rover-derived off-road tech casts a wide safety net. You can toggle between Rain, Mud and Snow traction modes, and there’s a low-traction launch mode to set off in bad conditions, too.

Typical of Jaguar, the F-Pace’s ride and handling is excellently balanced. Despite the lack of an air suspension, the large SUV smothers bad roads, especially when it’s at speed, though there is a bit of lumpiness felt at city speeds. What really surprises, though, is the way this big SUV handles. You wouldn’t expect something this large and heavy to take corners the way it does, with surety and agility. While the steering can feel a bit heavy in urban environs, underscoring the F-Pace’s size among smaller cars, it’s beautifully weighted at speed and lets the driver know exactly what’s going on. There is one minor quibble — there’s quite a bit of road noise that filters into the cabin, which takes away from that feeling of being cocooned in comfort. 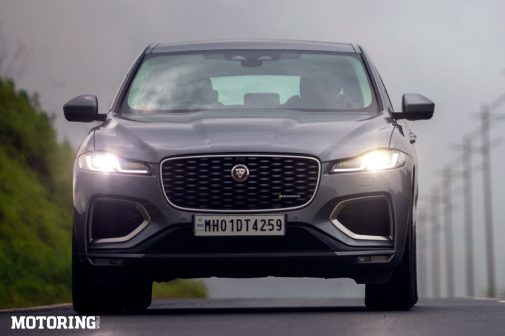 All in all, the updated F-Pace is more a Jaaaaag than the previous one, but it does come at a slight premium as well. To me, it seems to be worth the extra moolah and a worthy contender for those looking for a fun-to-drive comfortable luxury SUV. However, those looking for a bit more oomph should probably take a look at the ballistic 543-bhp F-Pace SVR. That should really put the bite in this cat!