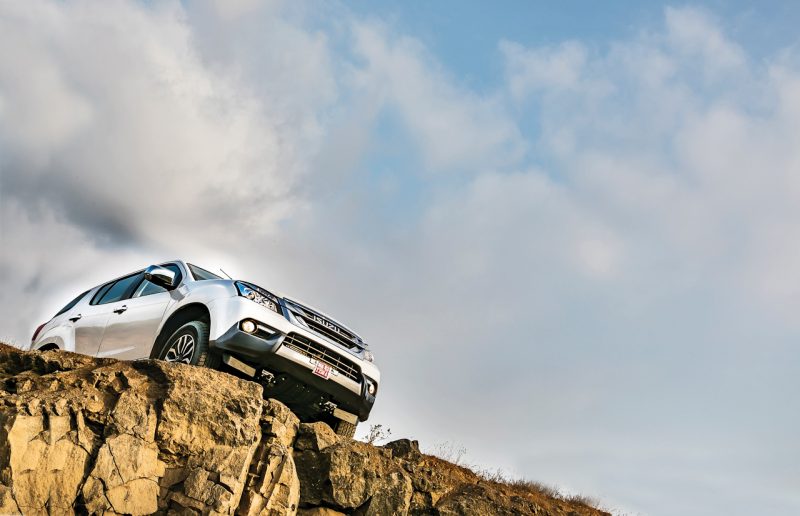 In what may come as a bit of good news, the MU-X you see here isn’t vastly different from the D-Max V-Cross we love to bits. What is it, exactly? Remember that hulking piece of metal that was the MU-7? The one whose primary aim was to ferry an unusually large amount of people in pitiable comfort? Well, this is nothing but its replacement.

Now, what you should know is that it’s not an update to the MU-7 in the strictest sense of the word. This, the MU-X, has been around in other markets for a while now, and it’s even got a facelift globally, but that’s not the one that India’s been fortunate enough to receive. Still, it is an improvement over the MU-7, which we can attest  to thanks to the time we spent with  it recently. For starters, it shares its platform with the D-Max V-Cross, and that already sets it aside as something to be happy about because we couldn’t get enough of the V-Cross’ ruggedness. Where it differs is in the fact that it gets its own engine and gearbox. It’s essentially a 3.0-litre four-cylinder turbodiesel that makes 175 bhp and 38.7 kgm, and it’s all put down to the wheels via a 5-speed auto ‘box. How does it do?

If I’m honest, it’s not the most scintillating experience. It likes taking its own sweet time with things. If you’re in a hurry on the road and desperately need to overtake a truck, then all you have to do is step on the accelerator, solve world peace, and I can guarantee you that you will have made it past the truck by then. It’s also a very noisy engine, and refinement is iffy, at best. Suffice it to say that speed isn’t its forte. What is, however, is its ability to just carry on without any deadlines. Keep the throttle at about one-half, and the gearbox suddenly seems to understand that it’s meant to shift cogs at an appropriate time.

Even the suspension, when you’re driving casually, is brilliant. It’s a very soft setup, so if you’re five-up with a fair amount of luggage, and you have no place to get to in a hurry (and this part is key), it’s an extremely comfortable ride. Push it harder and the entire experience gets frightful; the steering loses any semblance of connection to the wheels, the ride is akin to a bouncy castle, the brakes will crumble under the effort, and you’ll be one pile of sweat in the driver’s seat. Obviously, then, this isn’t the car to take corners hard in. Typical of most ladder-on-frame SUVs, it’ll sway and tilt uncomfortably, and the tyres start moaning and squealing in protest the moment you show it the slightest corner.

Is it of no use , then? Hardly. The MU-X is extremely capable — off the road, that is. You see, it’s just the qualities that make it an average performer on the road that make it exceptional off of it. The softly sprung suspension will allow it to breeze past irritants like rocks and boulders, and by breeze I mean calmly drive past at 5 kph, of course. Don’t be silly and try anything faster. The lifeless steering suddenly comes into its own and tells you exactly what you need to know; and the best bit is that it has a 4×4 that can be selected via a rotary knob right under the gear lever. There’s certainly huge scope to go off-roading with this one. Probably not as much as the V-Cross, sure, but the potential is clear to see. Just stick on a set of off-road tyres and you should be good to go. Other than that, the MU-X’s appeal lies in the way it looks. It’s a clean, rather handsome design that has an imposing presence on the road. I certainly wouldn’t want to have one of them in my rear-view mirror flashing its lights at me. The LED daytime running lamps are a neat touch, as are the 17-inch alloys that run on 65-profile tyres.

On the inside, anyone who’s stepped into the V-Cross will feel right at home. There’s the familiar instrument cluster and the circular dial for the climate controls. The cool bit that Isuzu’s added is that the rear bench gets a fold-out 10-inch screen that you can watch videos on. It’s not the most sophisticated piece of tech, though, so you can forget about getting things like smartphone integration into the mix, but suffice it to say, it’s a welcome addition.

Where the MU-X really excels, though, is in the sense of space. There’s plenty of it. The front seats are wide and comfortable, the middle row has an acre of legroom and shoulder room, although long distances could become a bit cumbersome thanks to the inadequate thigh support. As for the third row, well, that’s not really much of a talking point. It’s best used for luggage. The second row flips down with the pull of a single lever to give you access to the third row, but you’d be better off just liberating  more boot space by flipping the third row down.
In essence, the Isuzu MU-X’s main aim is to undercut SUVs like the Endeavour and the Fortuner, and in a sense, it has a fantastic chance to do just that. It’s a good looking car, it’s got a nice cabin but it’s not as plush as the others, and it can do the off-road bits rather well in addition to being an average performer on the road. With a price tag that starts at ` 23.99 lakh (ex-showroom, Delhi), Isuzu might just be able to pull it off. It’s a commendable effort, to be honest. Let’s just collectively decide to ban the sale of full black tints and a representative party flag for the MU-X, shall we?