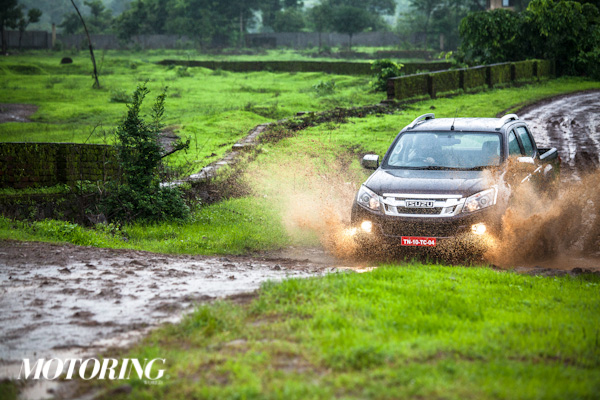 If cars are like women, pick-up trucks are like alpha males. There’s something about a pick-up, howsoever polished it may appear to be, that makes you want to kick its tyres, punch it in the fenders and generally stand back and stare at it. Maybe it’s the presence, maybe it’s the sense of purpose. What it really does, however, is compensate (for you know what). If you drive a pick-up truck, you are no longer ordinary. You are entitled to wearing work denims and some form of hat. You are expected to tame gorillas and hack down trees. You are, to keep it brief, a real man.

So, obviously, I was mighty pleased when the Isuzu D-Max V-Cross (that’s a lot of words that don’t exactly mean anything) showed up at home one rainy morning. Huge, imposing and brown — it looks unapologetic and arrogant. That huge chrome grille can blind the sun with its own reflection and there’s more chrome littered on all sides of it. I walked around it, while still parked outside (I wanted my neighbours to see it — ahem!) and I couldn’t help but admire the sheer size of it. The 16-inch tyres do make it appear as if it skipped leg day at the gym, though.

Surely, since Isuzus are typically like Toyotas minus the PR skills, I thought the V-Cross’ interior would be a huge let down. But it wasn’t. It’s all very modern and well laid-out and, as a friend’s eight-year-old son pointed out, the two-tone dashboard looks a bit like the Chevrolet Captiva’s. That kid is brilliant, I tell you! Heck, the V-Cross’ interior is beige, even, and that’s something you just don’t expect to see in a car that appears to have the soft skills of an electric pole. There are some cleverly hidden cupholders and cubbyholes in there and it even gets a touchscreen LCD and steering-mounted controls. All right, so the plastics don’t feel as premium to the touch as they visually suggest, but it does feel rugged. A short drive to Khardung la and back should tell us the real story, I guess.

I fired it up and was immediately subjected to a typical turbo-diesel growl that reeked of torque more than outright power. And that’s true. The V-Cross’ 2.5-litre common-rail motor with its variable geometry turbo and intercooler is all about real-world grunt. It’s meant to lure you into challenging situations and then (thankfully) pull you out of it. It’s not about travelling across the country quickly. It’s about having fun everywhere you go. That, paired with the shift-on-the-fly 4WD (with a low-ratio cog), the independent front suspension and brilliantly set up leaf springs at the back, means the V-Cross is invincible on our kind of roads. And off them, more importantly.

After a short highway blast, where the V-Cross comfortably held 140 kph with admirable cabin noise insulation, I, with a willing accomplice in tow, decided to steer it off the road and into my favourite neighbourhood off-road trail. This trail has shredded the underside off a Tata Aria 4×4 in the past and even a Mahindra Thar doesn’t exactly have it easy out here, so it should be challenging enough, right? With 4-Low selected on the electronic knob (which beeps until 4L is actually selected — a very insightful feature), we’re to wade through a small stream and it goes through with no drama whatsoever. If that sounded like a boring sentence, it’s because that’s how nonchalantly the V-Cross dealt with it.

Slushy inclines? Not a problem. High-speed puddles? Easy! Wheel articulation? Well, I only tried after the shoot was wrapped up but it can do that proper dog-relieves-itself, one-wheel-up-in-the-air thing with ease. Yes, being a pick-up truck comes with its limitations. The long wheelbase does increase your chances of getting beached over a steep crest and the huge loading bay (probably big enough to fit in a small motorcycle diagonally with the tail-gate down) brings with it an equally huge overhang. But that’s nothing an ARB lift-kit and off-road bumpers can’t take care of, right? It’s so good, in fact, that the Aussies actually host a one-make rally dedicated to it (Google it, it’s serious stuff!) and it’s even a Dakar regular. That’s comforting validation, isn’t it?

While the hardcore amongst you will definitely love it, the V-Cross’ trump card is the ease with which even the less experienced can indulge in a spot of off-roading. Because it’s so car-like to control, it will lure you into venturing into places you wouldn’t normally dare. And it’ll make you look good, especially on your Instagram. That’s usually what it takes these days to get hooked onto the outdoorsy lifestyle anyway, isn’t it? Even the least adventurous amongst you will appreciate the well-weighted steering and the ride quality, and that’s down to some very thoughtful engineering and testing by the folks at Isuzu.

Is there anything not to like about it? No, not really. Okay, some form of park assist (just a beeping sensor, even) would really help, but then that’s nitpicking in a car that’s so capable and yet so comfy. The V-Cross is a bold entry into a not-so-flourishing segment from a manufacturer that hasn’t really tasted success in the country — a huge risk, in other words. But, thankfully, it doesn’t disappoint. It’s practical, it’s honest, it’s immensely potent and it even has a great price tag — Rs 13.4 lakh, ex-showroom, Mumbai, is brilliant, right? Now, if you’ll excuse me, I gotta chop down that apple tree.