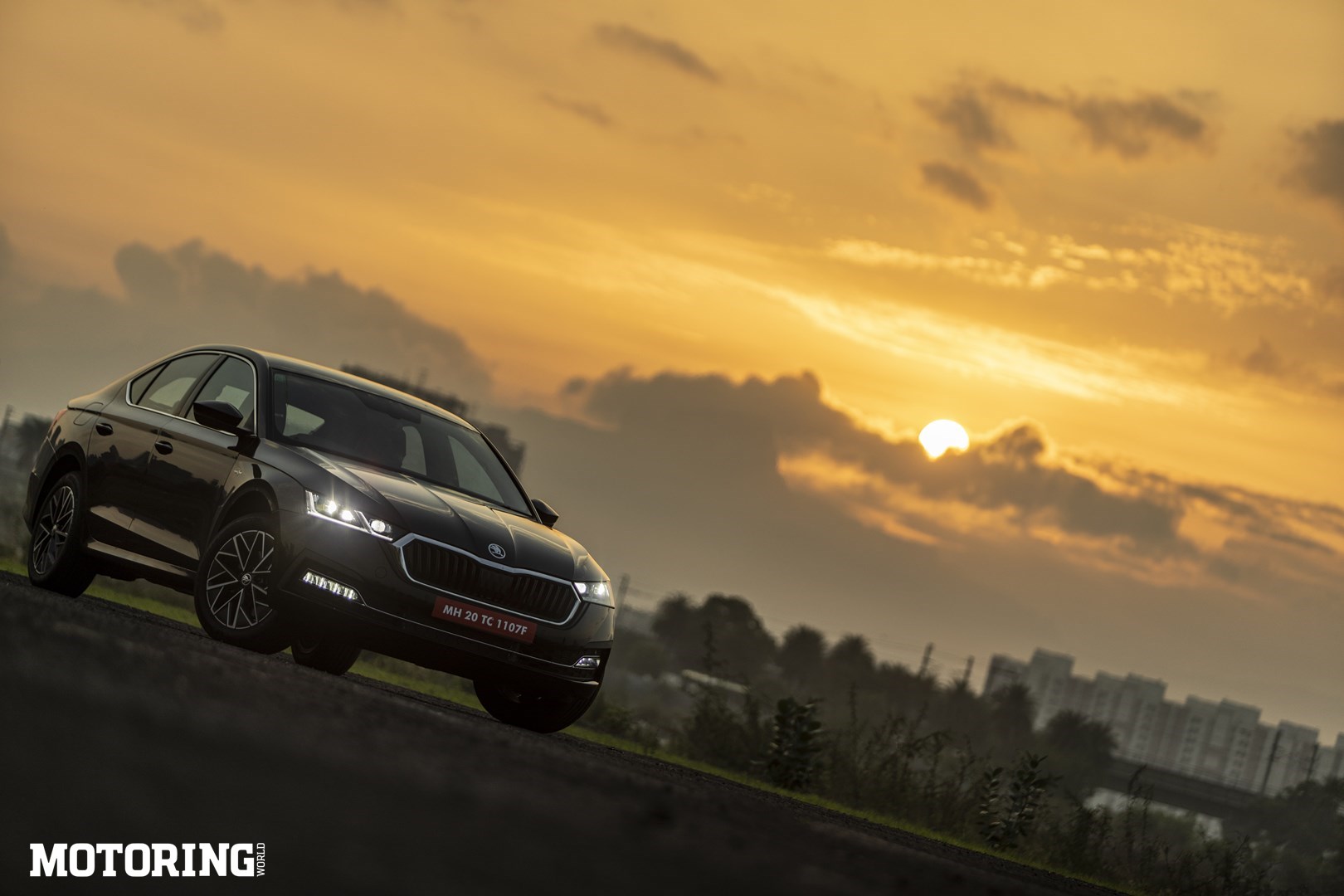 What is the new Octavia?

The Skoda Octavia, third of its name (in India), fourth-generation of the Czech brand’s executive sedan, the petrol-powered favourite, has made its return to our market. Since it arrived in India back in first-gen form in 2001, the Octavia has been a staple of Skoda’s stable. While the advent of BS6 emission norms in April 2020 saw the discontinuation of the third-gen model, the Octavia is back after a little more than a year and it promises to elevate the buyer experience.

In a word, striking. The fourth-gen Octavia inherits Skoda’s new-design chrome-lined grille from siblings like the Superb and gone is the split-headlight setup. The short, sculpted bonnet flows down to trapezoidal LED headlights with DRLs, which sit above a smooth, beefy front bumper that gets LED fog lights framed by chrome. The chrome strip that connects the fog lamps seen on our test car, which is the top-spec Laurin & Klement (L&K) variant, is not available on the Style trim.

Similarly, 17-inch black-finished ‘Pulsar’ alloy wheels are on offer with the L&K, while the Style variant gets 17-inch ‘Rotare’ silver-finished ones. Other than the badge denoting the L&K variant and exclusive colour options for it, there isn’t much to differentiate the two trims from the outside.

From the side, the new Octavia looks hunkered down and sleek. A short front overhang, the much longer rear overhang and the coupe-like raked roofline accentuate the sporty intent. The tapering wraparound LED tail-lights, contoured boot – with Skoda lettering prominently displayed in chrome – and protruding rear bumper help make the Octavia look wider than it is.

What is the new Octavia like on the inside?

Beige dominates the cabin of the fourth-gen Octavia – from the soft-touch materials on the dashboard to the seat upholstery – and contrasts well with the black and grey elements on the dash and centre console. Configurable ambient lighting uplifts the cabin, too, with this reviewer being partial to the red.

The steering wheel is an all-new two-spoke unit. Although its design may polarise opinion, it’s nice to hold and the buttons for the cruise control, infotainment system and other functions are easy to access with just the thumb.

A 10-inch infotainment touchscreen, which is placed within easy reach of the driver and front passenger, houses the controls for the two-zone climate control system though there are physical buttons below for a few AC functions such as the defogger. There’s an innovative slider to control the infotainment system’s volume just below the screen, which is a nifty addition.

A highlight of the new Octavia’s cabin is the full-digital instrument cluster. Skoda’s ‘Virtual Cockpit’ has two settings. The first shows a plethora of information like the dials, a digital speedometer, the current song playing, distance traveled, tyre pressure, the gear you’re in (if you’re using the paddle shifters), among others. The second display is a minimalist one, just showing the distance to empty, the speed and what’s happening on the infotainment system. In both configurations, the screen is easy on the eyes and figures are visible even in direct sunlight.

One might think that the sloping roofline means headroom is at a premium and those above six feet might find that to be true. However, for most Indians (the average height for males and females stands at five feet eight inches and five feet three inches, respectively), it should be adequate. The powered front seats with a memory function and the powered 60:40 split-folding rear seats are well-bolstered and offer good support. However, space for three abreast at the rear may feel inadequate over long distances.

For this latest generation, Skoda has opted to offer a 188-bhp 2.0-litre turbo-petrol engine only. Zac Hollis, director of sales, service & marketing at Skoda Auto India, mentioned that that brand may consider introducing the smaller 148-bhp 1.5-litre TSI engine (coming in the soon-to-arrive Kushaq), if there is a demand for it, though he definitely ruled out a diesel engine.

The 1984cc turbocharged inline-four unit is a step above the 1.8 TSI engine on nearly every metric, from power and torque to refinement. There’s a meaty surge of torque that propels the car forward confidently and power is metered out quite linearly as the revs rise. The engine is paired to a slick 7-speed dual-clutch automatic gearbox that features shift-by-wire, a first for a Skoda car. Shifts at part throttle are smooth, but it’s when the aluminium accelerator pedal is mashed does the transmission really shine. Upshifts are precise and quick, and there’s no hesitancy when downshifting multiple gears, either. The paddle shifters add a good deal to what is already a sporty package.

Ride and handling have traditionally been the Octavia’s strong suits, and the new model continues that tradition. Road undulations are barely felt and larger potholes are dealt with with aplomb. Some of the larger speed breakers should be navigated with caution, though, as the ground clearance is on the lower side. That said, the hunkered-down posture does aid in keeping the Octavia planted around corners. Electronics such as the e-diff do come into play when you push harder, which enhances the feeling of control, but does take away some of the thrill. The steering is also direct and weighs up well at higher speeds.

What equipment does the new Octavia get?

The top-spec L&K version we drove is quite well equipped. Eight airbags, front and rear parking sensors, a rear camera, active parking assist, an electronic parking brake and a tyre pressure monitor are among the standard safety kit.

Although the new Octavia L&K gets premium features such as wireless charging, active parking assist, an 11-speaker Canton sound system with a subwoofer and a hands-free boot opening function, one notable option from the equipment list is a sunroof. Some may see that as a glaring omission as hatchbacks and sedans in lower segments are equipped with one.

Nonetheless, Zac Hollis mentioned two reasons why the Octavia does not get a sunroof. The first is that the model brought to India is made at Skoda’s Czech facility, knocked down into kits, and then assembled at the Aurangabad facility. This means we get nearly the same spec and quality standard as the model for Europe, which does not get a sunroof, either. The second reason is that incorporating a sunroof into the low coupe-like roofline of the new Octavia would mean even less head room for occupants.

Should I buy the new Octavia?

Skoda has priced the fourth-gen Octavia at Rs 25.99 lakh, ex-showroom, India for the Style trim, and Rs 28.99 lakh for the L&K. This means Octavia prices start Rs 4.87 lakh higher than its only competition, the Hyundai Elantra, which is also available with a diesel engine option for those who might want one.

On the other hand, there’s very little to fault the new Octavia, barring the lack of a sunroof. If pushed, I’d say the beige interiors might be more prone to staining and that there’s a bit of a jerk when setting off when the parking brake is engaged. 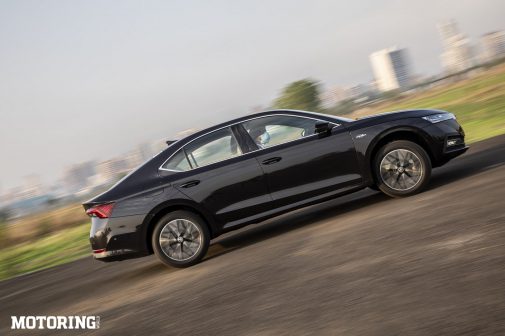 Nonetheless, this new Skoda Octavia improves on its already accomplished predecessor, which is really saying something. Considering Skoda’s executive sedan is slightly larger than and as powerful as recently launched (and more expensive) entry-level sedans from Mercedes-Benz and BMW – namely the A-Class Limousine and the 2 Series Gran Coupe – the Czech company hopes to lure those buyers to its more affordable offering. There’s almost no doubt that Skoda will meet its target of selling 150-200 cars a month.

While it’ll only arrive sometime next year, Zac Hollis also confirmed the hotter RS version is coming to India. Octy fans have good reason to rejoice.