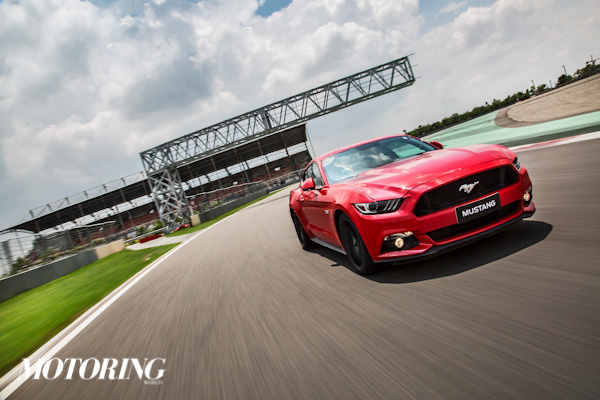 Barring a miniscule percentage of car enthusiasts, muscle cars are an unknown quantity for car lovers in India. Not surprising, since we have never had them in India nor has there been an appetite for them. We have been busy looking for practicality, fuel economy, space, after sales service and what not. And when it comes to powerful cars, it’s only the ultra-expensive sportscars that are aspirational for the majority. Muscle cars for me, on the other hand, seem to be a good and affordable (which is subjective, I accept) way to fulfil one’s desire for a powerful car. The Mustang, which started the cult of muscle cars or ‘pony’ cars as they were called in 1964 when the Mustang debuted, is finally in India. Time to find out if my perception about muscle cars is right.

This is the sixth-generation Mustang and the first one to be made in the right-hand-drive format, which is why it is available in India. Throughout its six generations, the Mustang hasn’t stopped being a looker. Personally, the third-generation (1979-1994) was my least favorite, but those were difficult times for the car industry globally and muscle cars weren’t getting the attention they were used to. History apart, the new Mustang carries forward its swag with the elan of an MMA fighter. The muscle is there for everyone to see, but it’s more defined and toned rather than just being beefy. The long hood, a big trapezoidal grille with the iconic pony, sleek headlights, the sloping roof and the retro vertical tri-bar LEDs at the back — they are all elements that keep the classic Mustang and muscle car connection intact.

While looks play an important part these days, back then what people looked for in a muscle car was under the hood. It had to be a big engine, which belted out enough power to smoke out everyone else in the field or the drag strip. The first V8 in a Mustang was a 4.7-litre unit pushing out 210 bhp in 1965. Yeah, in 1965, when most mass manufacturers were focusing on giving car buyers options that could ferry people without breaking down. Like in 1965, there are multiple engine options available in the Mustang today also — a 2.3-litre EcoBoost, a 3.7-litre V6 and a 5.0-litre V8. Thankfully, the first one to come to India is the V8.

This V8 makes 435 bhp globally, but since the fuel quality in India is not very good (you know that already, don’t you?), Ford had to detune the engine. Not what one wants to hear when you are waiting to take the new Mustang out on the track, right? The India-spec Mustang makes 396 bhp with a massive 51.5 kgm of torque and with all that power going to the rear wheels, it is delicious. My first lap in the car was spent only soaking in the glorious V8 rumble, which is a delight even at low speeds. While pretending to listen to my instructor, I was lost in its growl during downshifts and in its melody during acceleration. Slow lap done, the Mustang and I were ready to attack the track and the Mustang did not disappoint one bit. For a muscle car, it does pretty well on the track. There is some body roll and you do feel the weight of the car around corners, but it is nothing that bothers you or wants you to pull back. The 6-speed automatic gearbox is a bit confused when in Drive mode, but put it in Sport and it behaves very differently. True to its character, the Mustang loves long straights and is happy to go faster and faster.

Once done driving the car, I paid some attention to the interior as well. The retro-cool theme continues and the highlights for me were the toggle switches and the speedo saying ‘Ground Speed’ in the spirit of the P-51 Mustang fighter plane, which has been one of the inspirations for the Ford Mustang. The front two seats are bucket ones and decently comfortable. The rear seats are good for short distances or short people, and for people who would love to be inside a Mustang irrespective of leg-room. Since we are in 2016, the insides aren’t bare, but come with a lot of features like ambient lighting, electrically adjustable heated/cooled leather seats, 8-inch touch screen, Ford’s SYNC 2 connectivity system and eight airbags. For drivers, there are track apps which ironically we didn’t have the time to use while being on the track.

Ever since Ford announced that the Mustang is coming to India, I don’t know how many people have asked me about its price and then gone on to compare how much it costs in the USA and declaring that it won’t work unless it comes at a similar price. Well, now we know the price which is ` 65 lakh, ex showroom, Delhi, and I think it’s fantastic. Naturally, it is more than what it costs in the USA, but I still think it is a good price. People who want luxury and comfort when paying over ` 50 lakh aren’t the ones who want a V8 or care about how big the engine is under the hood. But for people who do care, the Mustang will be a great option. Think about it, everyone is downsizing, getting the same power out of six cylinders or four, but prices aren’t coming down. Currently, the cheapest V8 sportscar you can buy in India is the SLK 55 AMG for about ` 1.3 crore. The Mustang comes at almost half the price, offers more power and immense presence on the road. It won’t get any better for petrol heads who love their power and V8s.