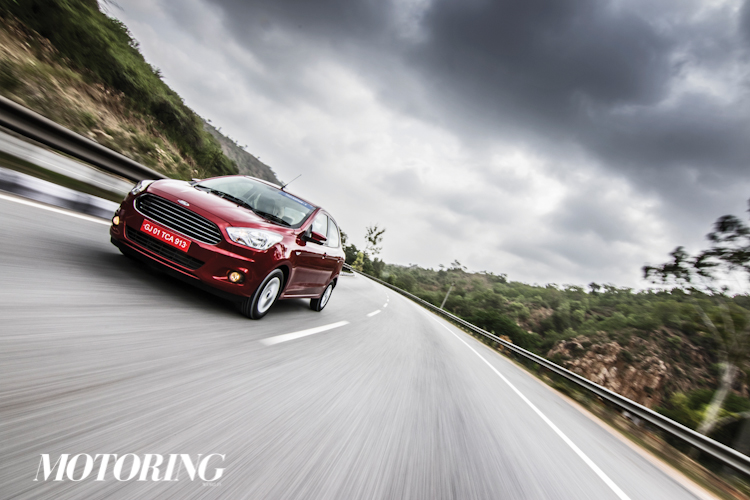 The great Indian middle class has been luring global brands into the country for a while now. Copious amounts of research has indicated that this class is bigger than countries put together, has discretionary income, likes to spend on new things (as against the more prudent older generation), and wants things which their Western and Chinese counterparts have. The story of the compact sedan segment has been somewhat similar. Nowhere in the world does this segment see as much as action as in India. So much so that products are now being developed in India to satisfy this segment and then being offered to other markets. After enjoying success in the hatchback segment (with the Figo) and the compact SUV segment (with the EcoSport), Ford wants a slice of the compact sedan segment, too. Enter the Figo Aspire.

THE NAME IS ASPIRE, FIGO ASPIRE
Let me start by saying that for me this is indeed the best-looking compact sedan in the segment. I say this without forgetting that the competition is not exactly good looking. Thankfully, that did not deter Ford India from paying due attention to how the Figo Aspire looks. The trapezoidal grille, chrome bits and large elongated headlamps give the car a distinctive look (yes, I know you’re thinking Aston Martin). Ford claims the grille channels airflow to heat exchangers, making the air-conditioning work better. Look at the profile and you realise the Figo Aspire is a compact sedan. The rear is neat with the badges and a chrome strip running across the boot. Overall, the car comes together well and does not look like as if the boot got chopped off in a rush. I wish it came with bigger wheels, though; the current 14-inch ones look a tad small.

LOOKS GOOD, DRIVES WELL
Ford India did not stop at designing a good-looking car, they want to attract buyers with their engine options as well. On offer are three options: a brand-new 1.2-litre Ti-VCT petrol, 1.5-litre TDCi diesel from the Fiesta and 1.5-litre petrol (only with an auto transmission). We had the 1.2 petrol and 1.5 diesel to drive and since the 1.2 petrol is the newer motor, we naturally chose that one first.

The 1.2 Ti-VCT (Twin Independent Variable Camshaft Timing) makes 86 bhp and 11.2 kgm. Reads underpowered? Well, it is not if you are a regular city driver and value fuel efficiency. Ford India has optimised this engine for better fuel efficiency with a variable-displacement oil pump that lowers the load on the engine. Within the city, the engine is well behaved and easy to drive, keeping you happy till 80-100 kph. Over that (you shouldn’t be driving over that in the city), it does not really like being pushed. It will grunt and pull through, but you know it’s out of its comfort zone.

The 1.5 TDCi is another story. Making 98.6 bhp and 21.5 kgm, this one is a punchy, ready-to-leap-into-action chap. The low-end torque is pleasantly surprising, available from 1750 rpm and makes city driving easy. The NVH levels are well under control and it does not make you turn the music up to drown the motor noise. Take it out of the city like we did and this engine is completely at home. No frequent changing gears, completely comfortable at higher speeds and fairly responsive — what more can you ask for? A lot maybe, but remember this is a compact sedan!

There is a third option as well, which I was keen on driving the most, but it will be available closer to the public launch of the car — the 1.5-litre Sigma Petrol (AT). The Figo Aspire offers electronic power assisted steering (EPAS), which makes the steering light for city driving, though it weighs up nicely when you get on to the highway. The electric motor replaces the belt-driven hydraulic pump of a traditional power steering system making it quieter and more fuel-efficient.
Ford India claims a fuel efficiency of 18.2 kpl for the 1.2 Ti-VCT and an impressive 25.8 kpl (ARAI certified figures) on the 1.5 TDCi. We did not have enough time to confirm these for you, but we will soon enough.

FULLY LOADED
I think Ford India was thinking of a higher segment car when they started planning what to offer on the Figo Aspire. They have really gone to town with the features on the car — six airbags (on the top-end variant), 20 storage spaces, automatic air-conditioning which claims to bring the cabin temperature of a car parked in hot sun to below 25 degrees in less than 15 minutes, a glove box that can hold a laptop, power and USB points, leather seats, MyKey, MyFord Dock (to charge mobile phones) and the familiar SYNC app.

While many of these features are segment-firsts according to Ford India, the ones that stand out for me are the storage spaces, strong air-conditioning and MyKey. There are enough and more spaces to keep everything you would want to during daily use — sunglasses, coins, bottles, past copies of Motoring World, your laptop and much more. There is a secret compartment, too, which is accessible only when the driver’s door is open. Well, it isn’t so secret now, but could be helpful in… er, difficult situations. You know what I mean, right?

The cabin feels roomy, the beige helps, leg-room and space at the back are good, but three full-sized adults will be cramped. The seats are comfortable, have a folding armrest and come with adjustable headrests. One of the first things I noticed while getting into the rear seat was no rear air-conditioning vent. Spend some time inside with the air-conditioning on and you realise you don’t need one; the air-conditioning is that effective.

MyKey is a really cool and handy feature — you can program the top speed of the car (no more high-speed drives for the chauffeur), limit the volume of the music system (no more loud remixes for the chauffeur) and prevent the traction control from being deactivated. I think your chauffeur will most likely quit when you get the Figo Aspire but these features are handy for other family members too (read: college kids).

ASPIRATIONAL ENOUGH?
There is no denying that Ford India has really put a lot of thought and effort (and research, they told us) in building the Figo Aspire. The Figo Aspire is a good-looking package, with good features and decent engine options. It seems to have checked all the right boxes vis-à-vis the current competition and we hear they will price it attractively, too. So if you are looking for an upgrade, one which makes you stand out from the crowd without giving up driving pleasure and comfort this could be the car for you.