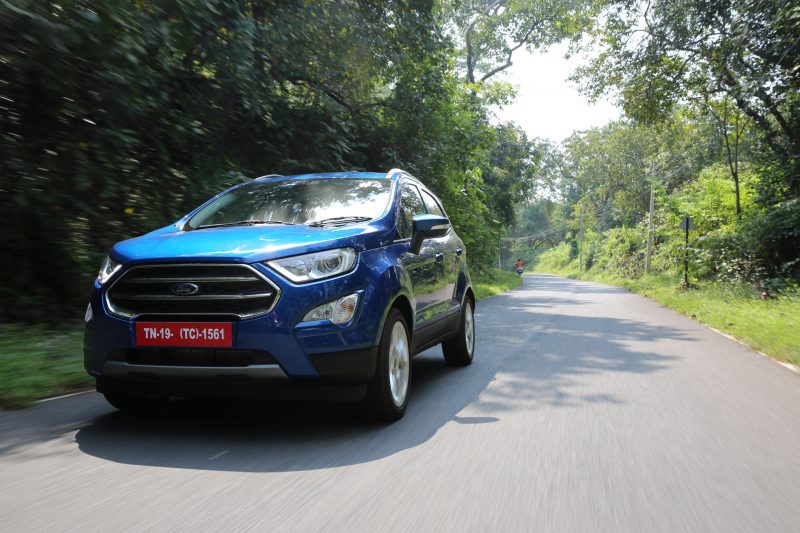 In 2013 when Ford first launched the EcoSport, it was an instant hit. India’s love for compact SUVs was nascent and the EcoSport turned that love into a craze within months of its launch. The EcoSport looked like an SUV, had the traits of an SUV and was priced well too. It had a good run, which lasted until the competition realised what a gold mine this segment was and came up with their own products. The segment continues to be a gold mine and Ford has done more and enough to reclaim its position in the segment.

Unlike most face-lift articles, I am not going to start with the styling updates this time. Not because there aren’t any significant ones, but because the one under the bonnet is more exciting. The new EcoSport gets a brand-new engine, a 1.5L naturally aspirated 3-cylinder petrol one at that. Before you get bummed by the 3-cyl bit, let me tell you it makes 121 bhp and 15 kgm of torque. Ford has worked hard on this unit and it shows. The 3-cyl motor is unusually refined for, er, a 3-cylinder motor. In fact, I can bet if you drive it without knowing that this is a 3-cylinder engine you will not realise it is one. Thanks to it being naturally aspirated, the response to throttle inputs is better and it feels so nice to drive a car without waiting for the turbo to kick in. 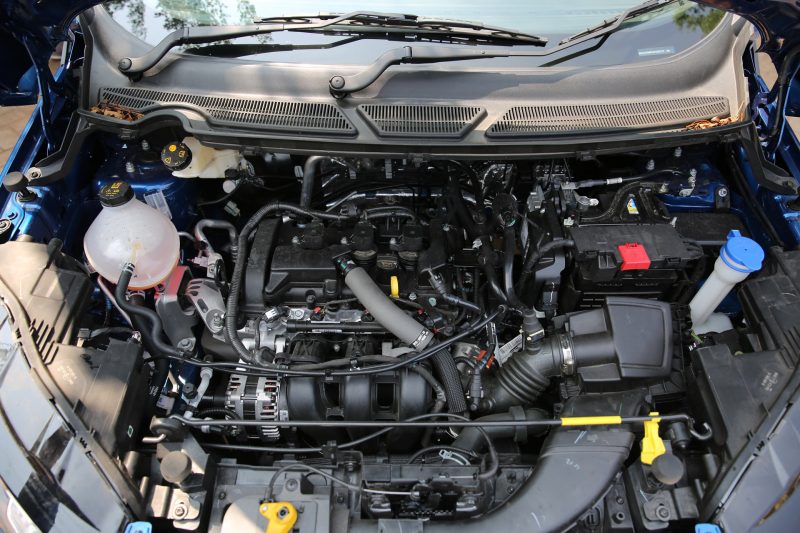 You may be wondering if the new engine means the death of the 1.0 EcoBoost, which was the star when the EcoSport launched in 2013. It isn’t, even though the new EcoSport will be available only with the 1.5 petrol and 1.5 diesel to begin with. We can only hope the 1.0 EcoBoost will return soon, maybe in a S variant (hint hint, Ford India). The 1.5L Dragon, yeah that’s what it’s called, makes about 2 bhp and 2 kgm lower than the 1.0 EcoBoost but it is not something which you feel instantly. The Dragon is happy to rev, all the way up to 6500 rpm, without any complaint irrespective of which gear you start pushing it from. There is decent mid-range grunt and the engine doesn’t feel like a step down. 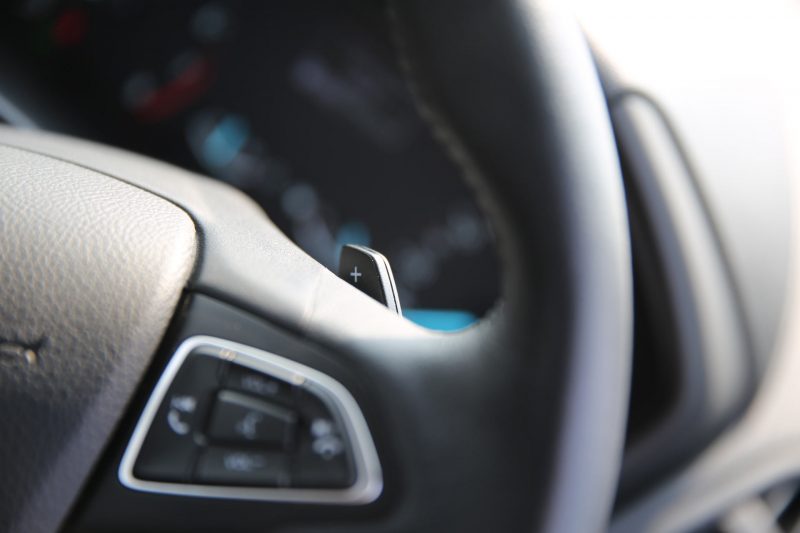 The Dragon is paired to either a 6-speed AT — which isn’t the DCT you get in the Figo but a torque converter — or a 5-speed manual. Ford says the DCT was given a miss to give a broader spread and to accommodate the export markets, but I feel it is more to keep costs under check. Despair not, as the AT comes with paddle shifters (yay!) and is well suited to your daily city driving. When pushed, there is a slight lag during upshifts but the downshifts are smooth. I know I have been a supporter of AT boxes, especially considering our horrible urban traffic, but do give the manual box a shot. It really frees up the engine and feels more fun to drive. 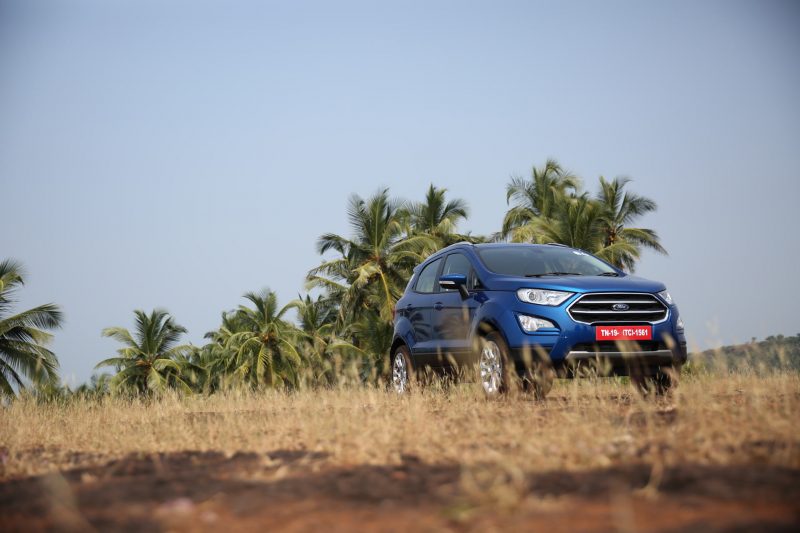 Should we talk about the face part in this face-lift now? After the engine, it is the front which has changed a lot and I am quite liking the changes. The larger projector headlamps, new DRLs, larger fog lamps, new grille with the Blue Oval sitting in the centre and the new bonnet give the EcoSport a more SUV-ish face now. It looks grown up and the changes certainly help with road presence. The profile and rear stays the same, barring the new allow design and 17-inch wheels on Titanium+ variants. People who were disappointed after reading a million online stories about the spare wheel not coming to the India model, cheer up as the wheel is where it was. 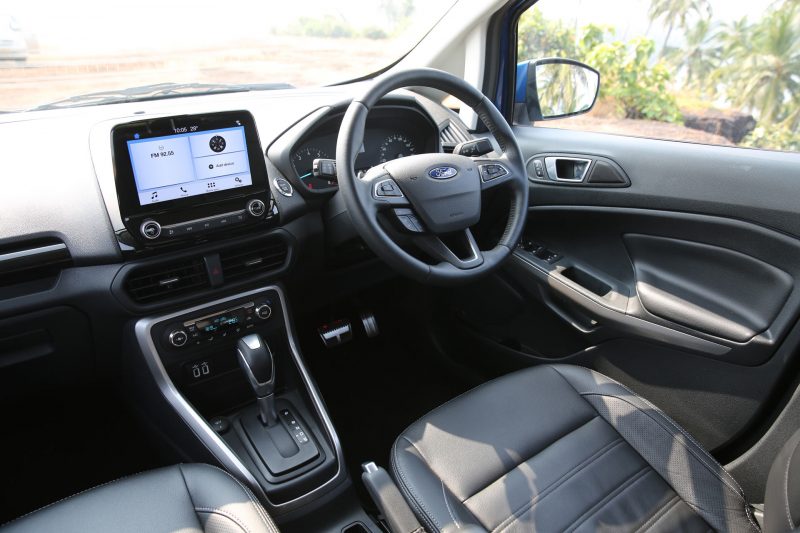 On the inside, you can’t miss the new 8-inch touchscreen SYNC 3 and it’s not only due to its position. Ford has tried its best to integrate the new screen, without changing much on the dash, and some may find it slightly in-your-face. However, once you start using it I am sure you will forget the positioning. The UI is pleasant, fonts don’t feel dated and it is extremely easy to use. Like all modern cars, it supports Apple CarPlay and Android Auto but misses out on navigation. Voice commands, Emergency Assist and native apps are still a part of the mix, only better now. You can also choose from 7 colours for ambient lighting, to match your mood you know. On the inside, apart from SYNC 3, the biggest positive change is the seats. They are softer but more supportive, both at the front and rear, with an arm-rest at the rear too. The under-thigh support is much better now, which should help making those long drives comfortable. Driver’s seat gets height adjustment but loses lumbar support. 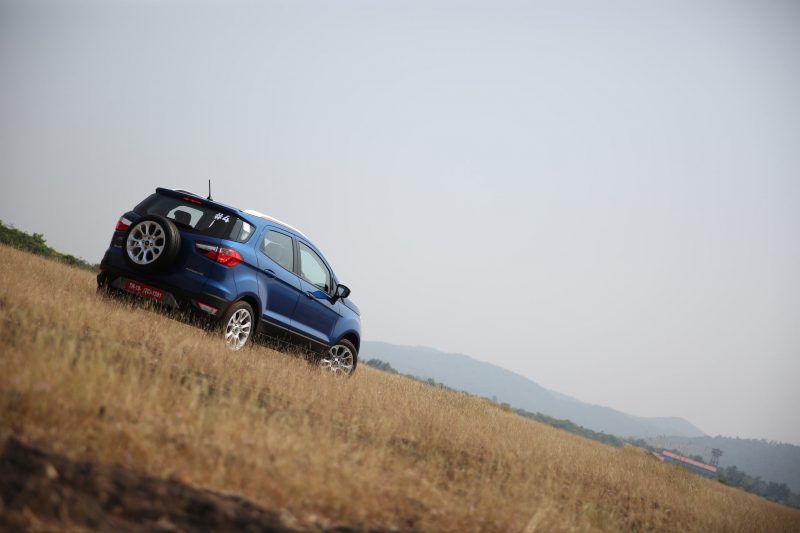 Ford has done enough to revitalise the EcoSport, I think and the changes are not just cosmetic. They have heard the customers, observed the competition and then done something which is true to their brand. Fords, the EcoSport included, have always been more driver-centric and dynamically sorted. Something which the EcoSport doesn’t compromise on, thankfully. There are some changes to the suspension, to make it more pliant, but nothing which disturbs the driving element of the car. I don’t expect Ford to over price it, maybe a 20-25k increase per variant over the current prices. The car feels solid, looks stylish, gets all the requisite modern gizmos, is loaded with safety features and drives as well as a Ford should. I can only imagine the compact SUV battle heating up more now.

You can have a look at more photos of the new Ford EcoSport in our detailed gallery here.