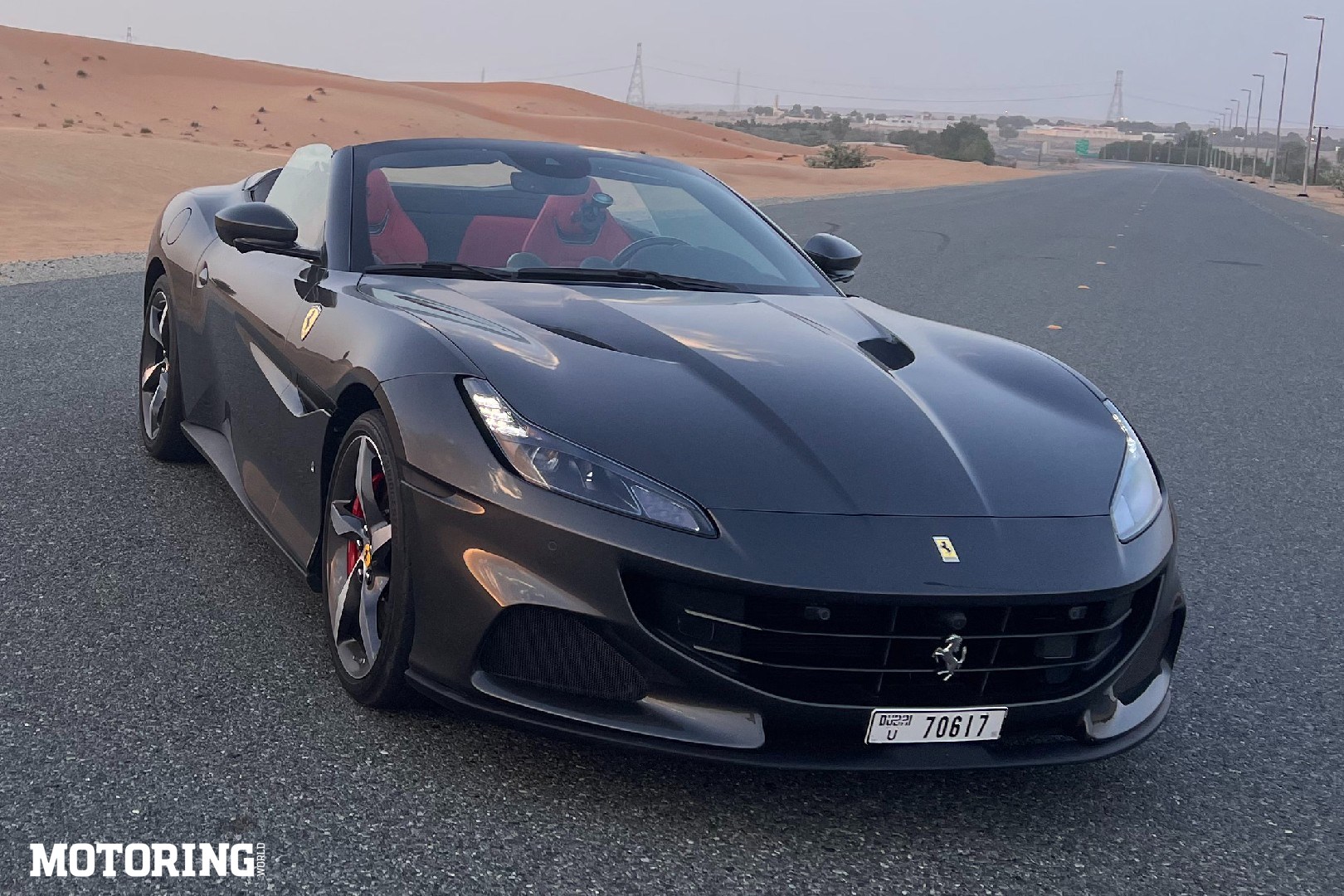 The constituents of my fantasy garage keep changing with the march of time. Without going into specifics, the garage always consists of more than a few RWD manual sportscars, a couple of long-legged grand tourers, a hypercar, and the odd utility-focussed off-roader. The inclusion of the new Ferrari Portofino M threatens the wholly fictitious presence of a lot of these cars because Ferrari has fine-tuned it to serve all manner of driving requirements. Alas, for those of us not named Jay Leno, shortlisting the fantasy garage lineup remains a very hypothetical concern. However, driving a Ferrari on an exceptionally clear November morning has thankfully manifested into a reality.

There’s a mild sense of déjà vu sweeping over me as I grab the bright red keys to the Portofino M. The first Ferrari I ever drove was for this very magazine. It too featured a folding hardtop and a V8. And while the placement and the nature of the Ferrari V8 may have changed, the thrill of piloting any car with a prancing horse badge remains as palpable as ever.

The Portofino M may be the weapon of choice for the holidaymaker in Tuscany, but it’s still dripping with sporty intent. There’s that button-infested flat-bottomed steering with a bright red manettino at the business end vying for your attention. As are the two vertical blades in the form of paddle shifters and the long, swooping bonnet housing a 3.9-litre twin-turbocharged V8. Much to the chagrin of tech snobs, things are still largely button-operated here, as opposed to touch-operated like they are in the Roma. Personally, I much prefer this sort of setup to having a touch-enabled surface on the steering, where a palm accidentally brushing against the surface can activate voice commands.

The ‘M’, which stands for ‘Modificata’ doesn’t denote a beefed-up Portofino. Instead it points to a shredded grand tourer that’s a bit more at home inside Ferrari’s famously performance-oriented stables than its previous self. Ferrari decided to spiff up the M with more aggressive air intakes, redesigned bonnet vents and a redesigned rear diffuser that allowed them to neatly tuck in an exhaust with a new particulate filter.

Thumb that big red starter button on the steering and everything else just fades into the background. There’s you, the horizon and a big, burbling V8 in the middle. Sure, the naturally-aspirated rasp is missing, but the exhaust is still loud enough to scatter any bird or squirrel in a 500-metre radius. Sadly, it doesn’t have the same effect on traffic and so it was only after trundling along at 60 kph for a considerable distance that I was able to gleefully bury the throttle in the footwell. Immediately, a free-revving trademark Ferrari engine note broke free from the exhaust and sent the Portofino hurtling towards the horizon.

The car corners flatly enough and remains perfectly planted, but something in my belly suddenly had the urge to be airborne, as that Italian V8 sang its way to the 7500- rpm mark. This, I suspect, is where Ferrari has hidden the added dose of power that the M receives over the standard Portofino. With 612 bhp at its disposal now (up by 19 bhp), this is only incrementally faster than before, but equipped with the Roma’s 8-speed dual-clutch gearbox, the deployment of that power seems even more seamless than ever. The ratios have been tweaked so the initial set of gears are more closely packed for quicker acceleration, while the remaining ones are tuned for better highway cruising. It rarely requires downshifts, and prefers to throw in more torque instead, maintaining the momentum.

This car isn’t designed to contend with Ferrari’s mid-engined siblings. It’s still a front-engined GT car with a foldable hardtop, and treating it as anything else is missing the point of convertible GTs, Ferrari or otherwise. Sure, the manettino has five settings, four of which put it in the trouser-dropping-quick category, but the Portofino M is just as comfortable trundling along B-roads and city streets. This is an everyday Ferrari, if only because every day spent driving it would be empirically better than most days.

However, what makes it more endearing is the effort it puts into juggling multiple roles. It tries to be an everyday Ferrari, a grand touring Ferrari, and a hair-raising supercar all at once — and for the most part it succeeds. Particularly when faced with an empty stretch, at which point it goes screaming for the redline, hitting supercar velocity in no time. Switching the manettino to comfort softens everything up, and the Portofino M, still the most compact Ferrari out there, becomes a relatively docile city car, absorbing undulations in a most un-supercar-like manner.

Back to the gearbox. ‘Speedy upshifts’ doesn’t begin to describe the lightning-quick responses of this unit. It’s been the ace up Ferrari’s sleeve for over a decade and it still continues to inspire awe, never skipping a beat. This one shares plenty with the ferocious SF90 Stradale and brings in torque at the low end to propel the Portofino M to warp speed. Around the bends, you can feel the weight up front in a way that’s absent from mid-engined Ferraris, but put it in ‘Race’ and you’d be hard pressed to not come out of the corner giggling.

As with the best rear-wheel-drive cars involving massive levels of power, the Portofino M loves to get its tail out. In fact, its more laidback nature coupled with its tail-happy attributes make it an absolute hoot around bends. And it’s not just the brakes that bite. Turning ESC off (which subsequently turns off the car’s race derived F1-TCS) is still the quickest and most ill-advised way to change directions. However, in ‘Race’ the car feels more eager to have fun.

Then there’s the most important litmus test of all. Does it look good with the roof folded? Yes. The Portofino M is no match to its closest competitor, the Roma, when it comes to sheer physical beauty. But it does successfully manage to exude exoticism in a manner only Italian supercars can. It’s not the prettiest Ferrari, but it gets the job done. And as far as customary nitpicking goes, Ferrari ought to do something about the buffeting wind plaguing the car’s otherwise flawless aerodynamics. 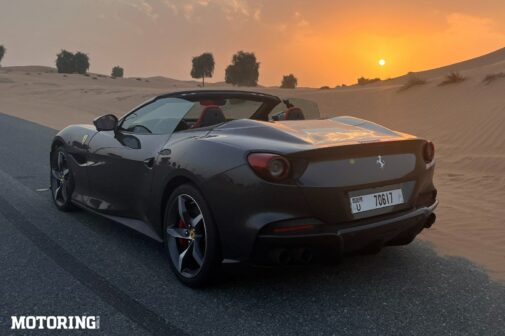 With its staggering power levels and capabilities, the Portofino M is as much of a ‘baby Ferrari’ as a bib-wearing Jason Statham is an actual baby. No, it isn’t as preposterously large as some of Ferrari’s former front-engined GT cars have been. And with its light, responsive steering and its blindingly quick ascent to 300 kph, it still leans towards the performance side on the grand-touring spectrum. Unlike many of the Nürburgring-conquering supercars out there, the Portofino manages to retain a sense of humour. This is despite the fact that everything about it, from the bigger vents to the reduced travel on the brake pedal, is designed to make this car more aggressive than the standard Portofino. Regardless of which way the manettino points, the M is the car you want to start the weekend with. A fast set of corners? A seaside B-road? Wherever the tarmac takes you, this Ferrari thrives.