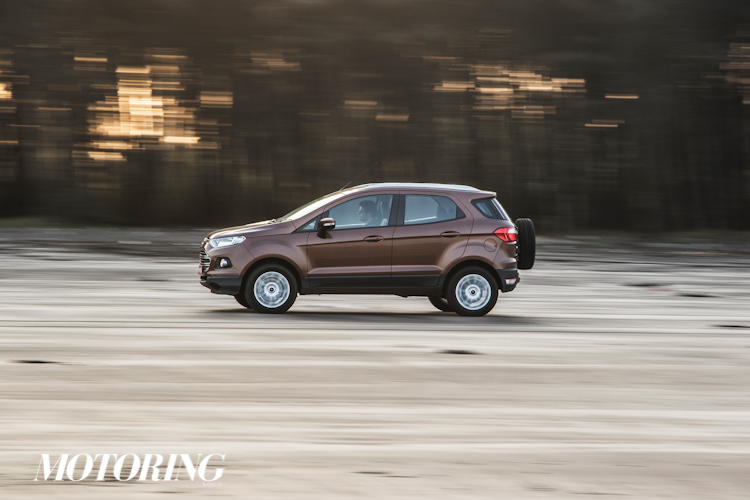 The Ford EcoSport is no longer going to be the only kid in the sub-4m crossover block. Come mid-2016 and the EcoSport will find itself tussling with the likes of the Maruti Vitara Brezza and the Tata Nexon, not to forget Mahindra’s various existing and upcoming utes as well. Going by the frenzy that these two have raised at the recently concluded Auto Expo, the EcoSport is in danger of being forced out of the block, with a blackened eye, at that. With its market share in danger, one would have expected Ford to give the crossover a substantial makeover to keep it relevant or shout from the rooftops. More so when, wonder of wonders, it’s a facelift that actually has changes under the hood and is not a ‘Limited Edition Anniversary Special’ with decals and a lip-spoiler. Even with its rather low-key launch, the facelifted EcoSport is worth taking a look at because while it may not have any sheet metal changes, 1.5-litre TDCi now comes with the same 98.6 bhp rating from the new Ford Figo hatchback and some nifty new features. The 1.0-litre EcoBoost and 1.5-Litre TiVCT petrol’s  power figures remain untouched, though.

One look at it and you will start playing a mental game of ‘spot the differences’. Had it not been for that eye-catching Golden Bronze (Golden Bronze, Ford? What next, Grey Steel?) shade — new for the facelift — you are not going to get the neighbours come out and congratulate you for buying the ‘New EcoSport’. Thumb the new-for-2016 push-button start (Ford brought it, then deleted it and now has it back again. Sigh!), a thin strip bordering the lower part of the headlamp casing lights up, Ford’s version of daytime running lamps (DRLs) for the EcoSport. Except that it isn’t. The strip under the headlamp gets easily washed out in the sun, and real DRLs are housed in a fog-lamp like casing in the front bumper. Step around the car and the only other changes are the roof-rails that are now painted in silver and the button for the boot release has been moved from the boot handle to underneath it.

Ford has not been very generous in doling out new features on the inside, either. Will you be swayed by the fact that the hand-brake feature is now leather wrapped? I think not. But in its defence, the Titanium Plus gets automatic rain sensing wipers and automatic headlamps.

The EcoSport has always been praised for its road-holding manners, and the Ford traits are strong with this one, too. As initial impressions go, the diesel is refined as ever with no vibes coming through the pedals or the gear lever and the steering weighs up nicely as you hit the highway. As it goes over some of Mumbai’s finest undulations and cracks on the Western Express Highway, the suspension does its work but makes you a party to the act of absorbing the bumps. You can feel it in the cabin, and the ride, while it is not uncomfortable, is still on the firmer side, as it was before. What about those nine extra horses, you ask? Put your foot down and the extra horses are discernible. The thing is, though, that the power is very evenly spread across the rev range, so what you get is a linear delivery right through. In that sense, if you are expecting an almighty surge, you will be disappointed. Almost as lazily as the tacho needle climbs up the rev range, the power comes flowing, not as a gush but like a faucet that has been opened slightly. However, one look at the speedometer would throw away all thoughts of the car being lethargic in anyway. The Expressway dissolves into a few corners and the EcoSport takes them with aplomb, with controlled body-roll and the steering tugging in your hands, efficiently feeding you relevant information around a corner.

At Rs 10.44 lakh, ex-Delhi, for the Titanium Plus variant, you will be paying only Rs 25,000 over the outgoing EcoSport. The value additions are well worth the price and you also get class leading safety with six airbags, anti-locking braking system and an electronic brake force distribution system. Combine this with the car’s commendable build quality and fun-to-drive aspect, and the EcoSport still makes a strong case for itself.