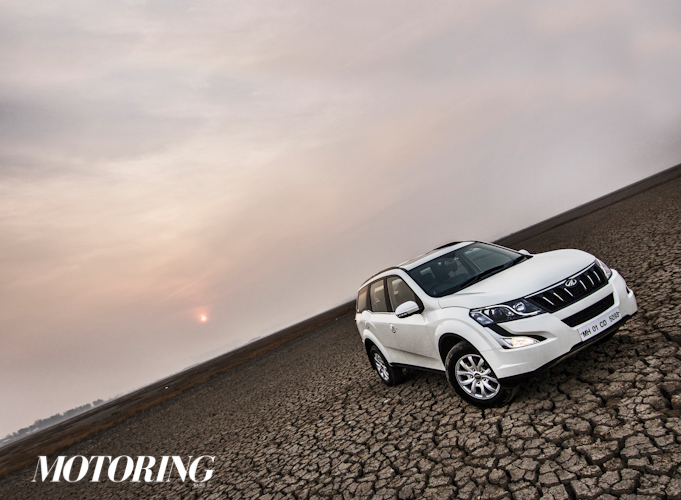 The XUV has a bunch of great traits, but an automatic gearbox was never one of the things on the options list. If you wanted an SUV in the price bracket, you’d have to settle for the Creta or shell out significantly more for an Endeavour or Fortuner. There’s an XUV automatic now, though, so you can rest easy.

On the outside, just a single small badge on the hatch that says ‘Automatic’. Otherwise you’ll see the same facelifted XUV that you’ll see on the manuals. This is remarkably understated for Mahindra, who has shouty ‘AUTOMATIC’ lettering running across both doors of the automatic Scorpio. The eagle-eyed anoraks among the great unwashed will also notice no keyless entry buttons on or near the  door handles.

On the outside, just a single small badge on the hatch that says ‘Automatic’. Otherwise you’ll see the same facelifted XUV that you’ll see on the manuals. This is remarkably understated for Mahindra, who has shouty ‘AUTOMATIC’ lettering running across both doors of the automatic Scorpio. The eagle-eyed anoraks among the great unwashed will also notice no keyless entry buttons on or near the  door handles.

Inside, it’s the same as an ordinary XUV, except there’s no clutch pedal, and there’s an automatic shift lever instead of the regular H-gate. There’s also a curious toggle switch on the side of the lever. More on that later. The instrument binnacle is the same, only the inner dial on the left now shows you the position of the gear lever.

It’s the same 2.2-litre mHawk engine that generates 138 bhp and 33.6 kgm, but it now puts its power down through a 6-speed Aisin torque converter. Depending on what you choose, you can have front drive or all-wheel drive. Our test car is the AWD, which is why there is an ‘AWD lock’ button. Also unique to the automatic is the Hill Descent Control button. The engine still remains the star of the show, covering up for the gearbox’s sometimes slow-witted response. The gearbox is perfectly acceptable, mind; when viewed through the glasses that keep the Fortuner and Endeavour automatics in sight, it holds its own really very well. The Creta’s automatic does a little better, but it doesn’t have as much kit as the XUV.

The XUV’s automatic gearbox is a major leap ahead compared to the manual gearbox, with its notchy shifts and long clutch pedal travel. However, it doesn’t feel exactly modern, for all its smoothness. It doesn’t like to downshift, preferring to slip the clutch for immediate demands for acceleration. Of course, this means a fuel efficiency penalty, and the ARAI fuel efficiency figure of 13.9 kpl reflects that. It matches the unhurried nature of the XUV’s ride and handling very well — although try to hustle the XUV, and it picks up its skirts and plows along admirably. Tip the lever left, and then you’re offered manual control over the shifts via that toggle on the side of the lever. Only the Ford Figo has opted for a similar solution in recent times, and we didn’t like that one, either. The changes via the toggle are appreciably swift, but we found it best to leave it in D and let it figure out how best to deal with the situation. The brakes on our test car were a little too grabby for our liking, but the harder we hustled it out on the highway, the more we liked them.

SHOULD I GET ONE?

It doesn’t seem like it, but yes. This is undoubtedly the better of the two gearboxes in the XUV, and it makes for a stress-free drive. The brakes are a little too sharp, but otherwise there isn’t anything remotely in the price bracket that has the combination of equipment, space, automatic gearbox and all-wheel drive. At Rs 17.4 lakh, ex-showroom, Delhi, it stands in no-man’s land, and that makes it a default option.