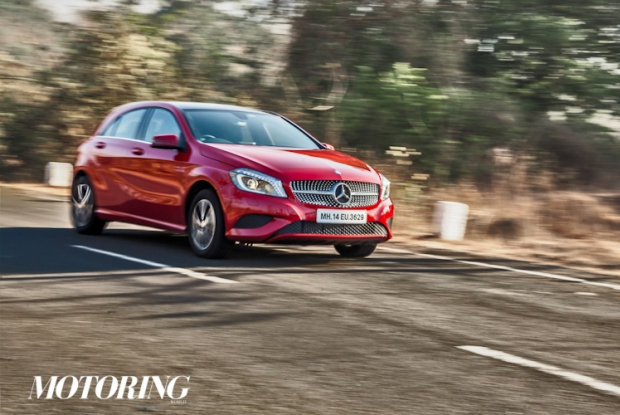 Let’s get straight to the point. The only thing the A-Class has lacked is power. It has always been underpowered. Both the A180 and the A180 CDI were seriously lacking in excitement and when it came to sitting at highway speeds for extended periods, the cars would feel extremely strained, the A180 more so. Now though, Mercedes-Benz has seen reason and given a new engine option for the car – the A200 CDI.
First the basics. The A180 CDI uses a 2143cc, turbocharged, inline, four-cylinder engine that makes 136 bhp and 30.6 kgm of torque. This motor is mated to a 7-speed dual clutch transmission that has been fiddled with a bit. Unlike the old car, the shifts now arrive instantly when you use the paddle shifters. The A200 CDI hits 100 kph in 9.5 seconds and the company claims a top speed of 210 kph. The added torque makes the car feel more relaxed on the highways. It also gives it that little bit of extra power for overtakes. One issue I had was the amount of engine noise that crept into the cabin. The diesel clatter is very un-Mercedes like.

The car still handles really well and thanks to the relatively stiff suspension setup, corners flat. But compared to the old A-Class, the suspension is a tad softer which makes the ride more pleasant. The smaller 16-inch wheels only add to this. Personally, I’m not a fan of the design and the low profile ones on the A180s looked a lot better. But it does wonders for the ride, so the sacrifice is understandable.

There have been some changes to the inside as well. The interiors are now done in a fabric and leather finish. I think it just makes the whole car look a little down-market. Other than that there is an updated instrument cluster and a panoramic sunroof.
So, is the A200 CDI worth the Rs 28.06 lakh (ex-showroom, Mumbai) price tag? If you ask me, the A-Class has always been the prettiest of the lot and the only thing lacking was performance to match. It might not be a scorcher yet, but it sure is a step in the right direction. So yes, it has become a better deal than before.