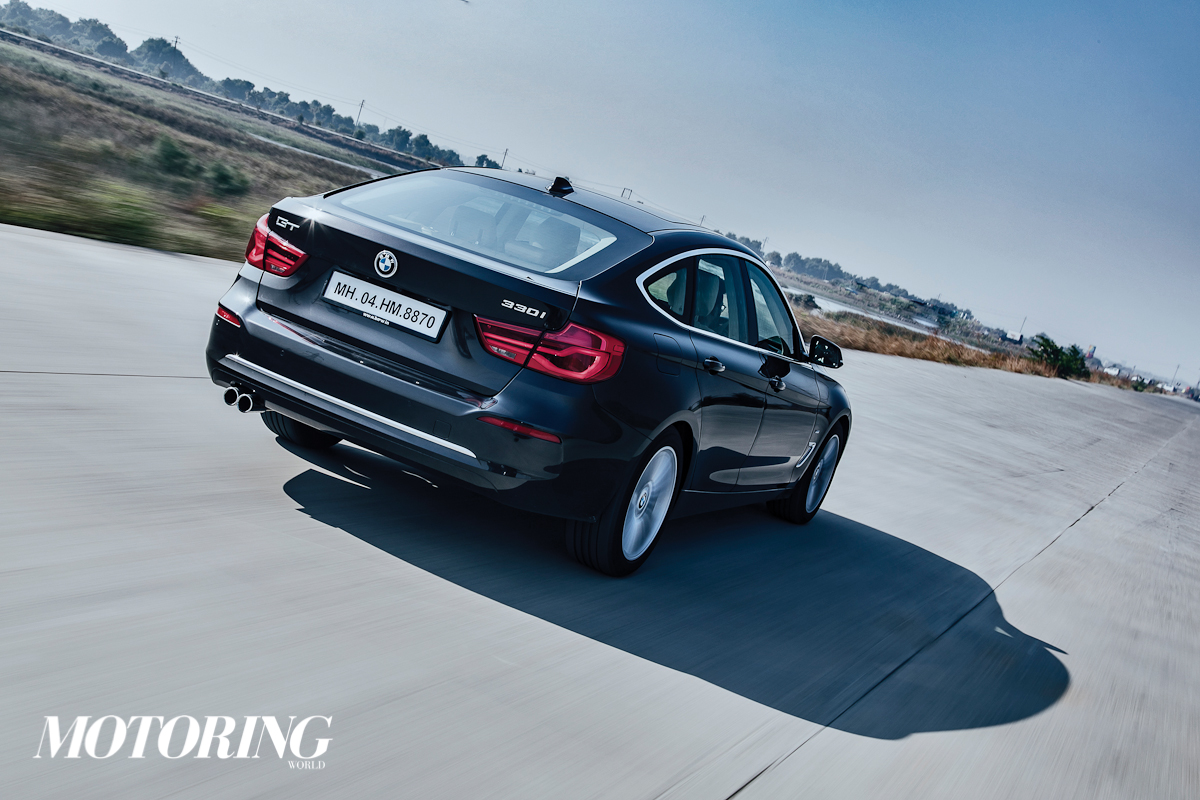 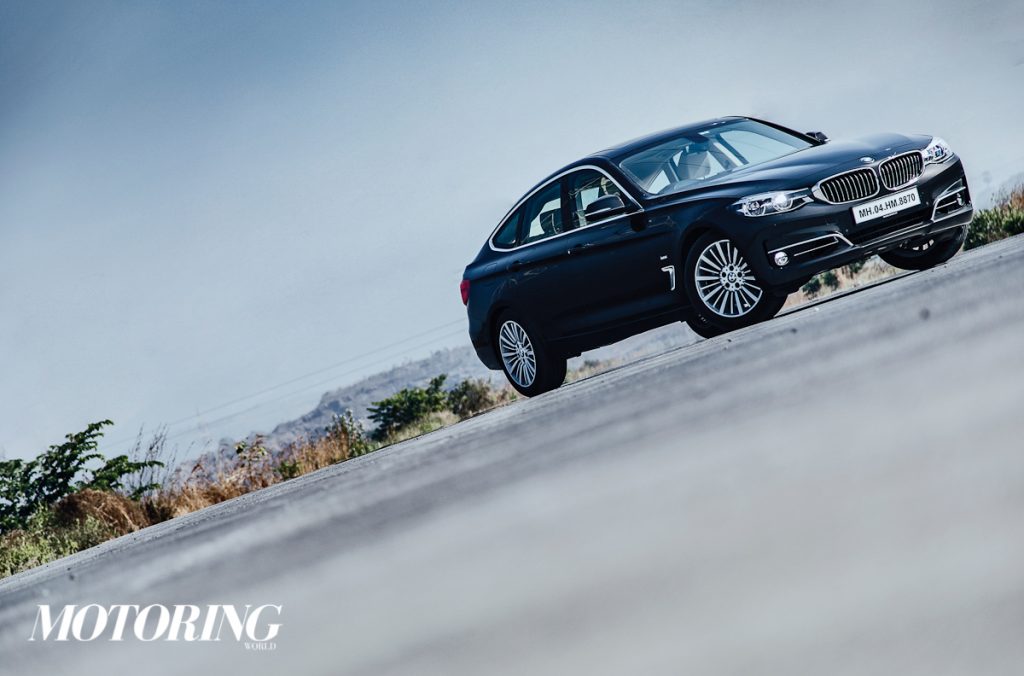 All it takes is the smallest of things to change your mind. Even the slightest bit of negativity is reversed when your lips unconsciously twitch to begin to form a smile. You could hoard all of the negatives together, hold on to them as though it’s the elixir for a life full of drab occurrences and visits to antique museums, but it negates itself the moment you find even one aspect that makes you think it’s all worth it. The 330i GT is an odd occurrence. I’m unabashedly in love with everything that BMW makes, so it wasn’t particularly intelligent to give me the keys to this thing. If you think about its cars, there’s a BMW-ness to all of them that’s undeniable. The 3 Series is charismatic in its approach to duality, the 1 Series (God bless its soul [in India, at least]) is brimming with untapped rallying potential, and the M4… my goodness, the M4. I don’t have to expand on that further, should I? Each and every one of its cars has some specific endearing trait about it. The 330i GT doesn’t. 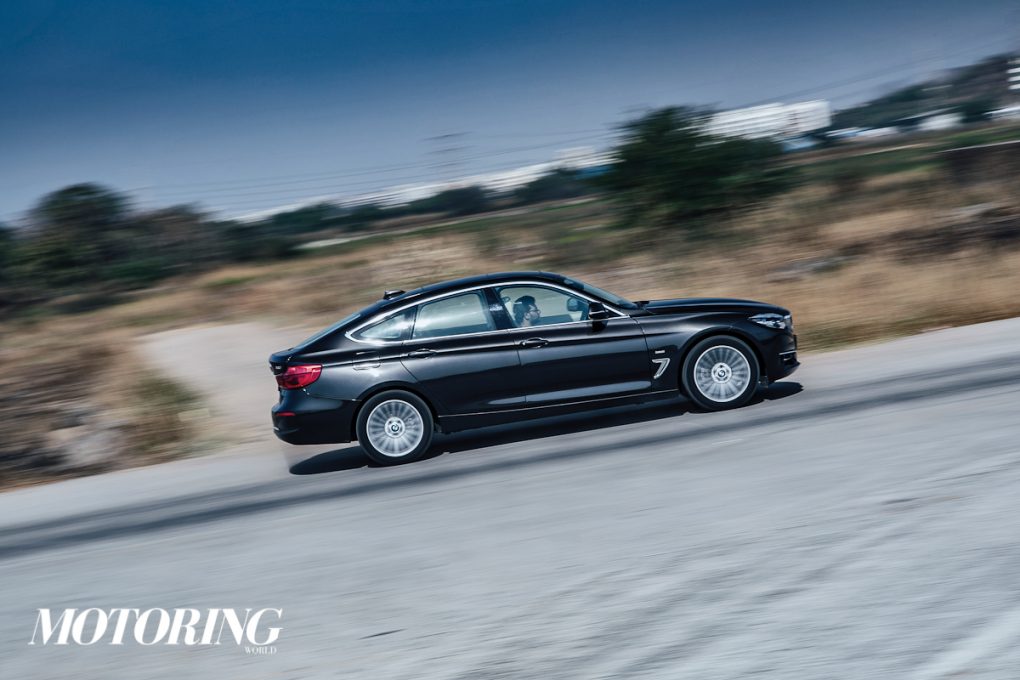 The first- and pretty much every-impression about the machine just doesn’t sit right with you. The most obvious and, er, sizeable addition is the implant at the rear that makes it look as attractive as a baboon snacking on itself. The obvious jump up in weight seems to have a cascading effect in terms of the car’s ride and handling abilities, but that’s something that I’ll drone on about later. For now, all it seems like is that the 330i GT is nothing but good at effectively not much at all. There’s reason for this. The excitement of driving a new BMW dissipated faster than I could think to myself, ‘What on Earth happened here?!’ when I got going. The last thing you’re expecting when you’re in a car that has its apparent touring abilities suffixed to its name is a softly-sprung suspension setup, and yet, it’s the first thing you notice when you’re driving it. I understand that there needs to be a bit of play when you’re traveling four-up with enough luggage to clothe a small village, but it’s so soft in the 330i that for every speed hump you go over, it’s like going over an additional two humps before the thing finally settles down. It’s downright sad. It’s worse than the suspension setups the first lot of Hyundais in India had, and that’s saying something. The 330i runs on marshmallow struts. 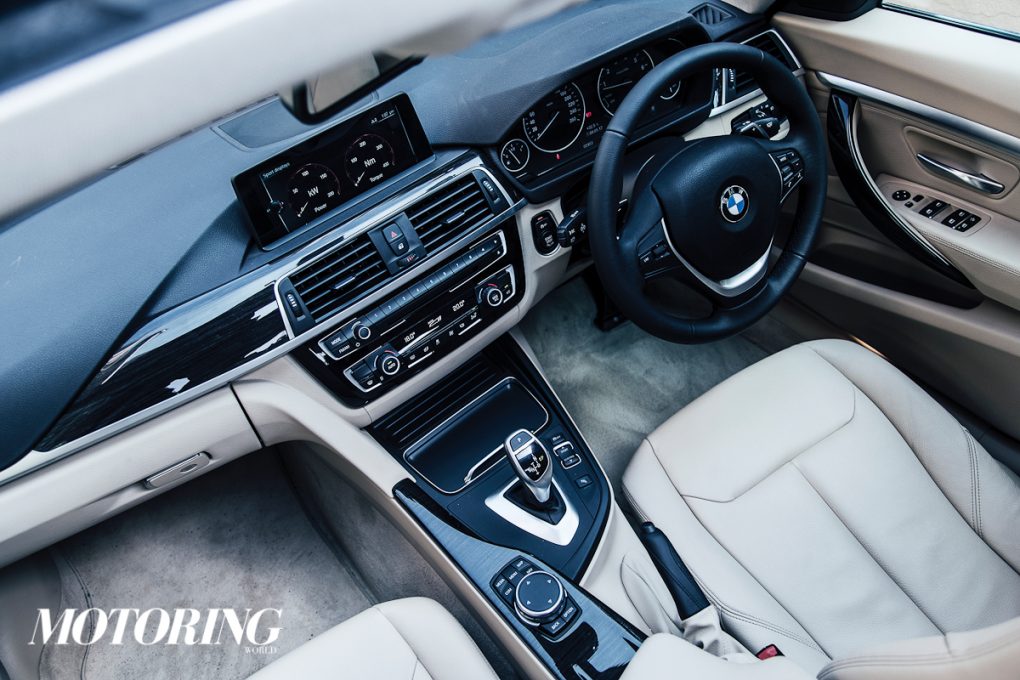 It doesn’t get better, sadly. Pardon me for being somewhat critical and obsessive so far, but they’re points worth mentioning. BMWs are fantastic driving machines for a reason; multiple reasons, actually, and it’s particularly disheartening when one of its cars doesn’t live up to its lofty expectations. It pained me to see the way the steering had so much play and just couldn’t keep up with what the front wheels were up to, despite not having to deal with the additional responsibility of having the power sent to the fronts, too. It’s unthinkable in a BMW, just as it’s unthinkable for a megalomaniac to seem content. If what you’re looking out for is a car that’s able to handle long distances with the ease with which Keira Knightley handles pretty much everything in life, then the two aspects I’ve mentioned so far need to be in order. You can make do with a slightly underpowered engine or an ugly rump, or even a particularly nasty, foul-mouthed relative sitting beside you, but the ride and the way the steering communicates with you are paramount to a GT car. And then, it all falls into place, as abruptly as this sentence. 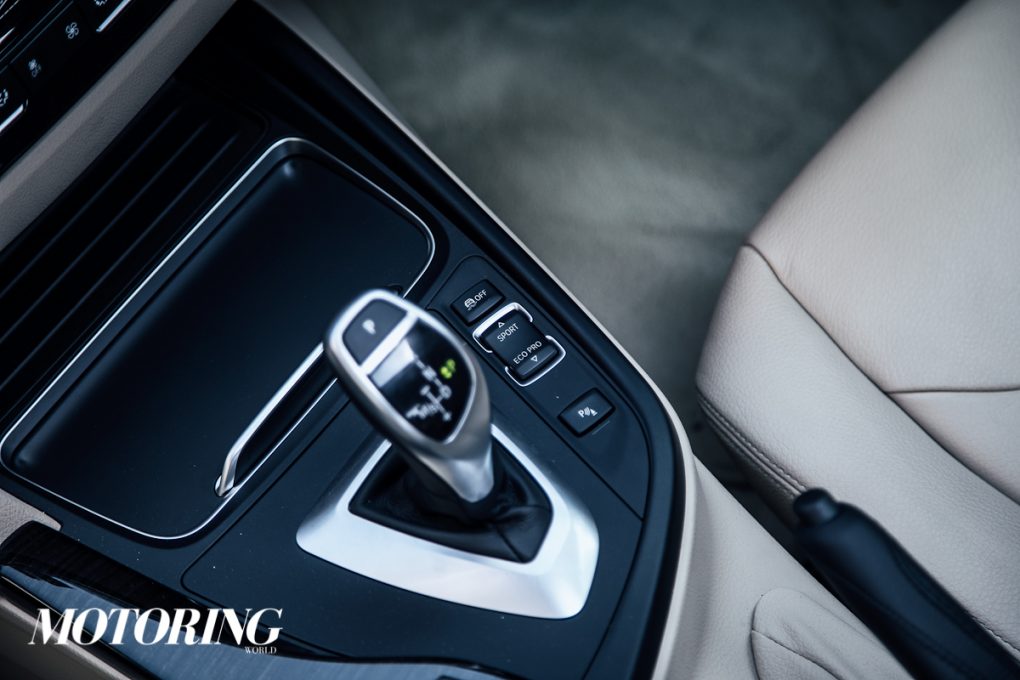 The apparent lack of BMW-ness the 330i GT portrays ceases to be a cause for bewilderment and sadness. It all comes crashing into focus when you start to really drive the 3 GT. All this while I’ve been trundling around in the city, expecting it to perform miracles and be something it’s not, has been a waste. I approached the car in a completely wrong manner. You see, at the heart of the matter is its 2.0-litre inline-four petrol engine. There’s no sublime six-cylinder here, in case the 330i badge misleads you, but BMW’s got this bit covered, thank you very much. Of course, it’s always nice to have two more cylinders, but BMW is nothing short of magical when it comes to its engines. It’s energetic, smooth and divine to hear when it’s banging on the limit of its powerband, and its drawbacks seem as important as the argument you had with your drunk friend about the threat Wolverine would be to womankind were he a gynaecologist during the day. 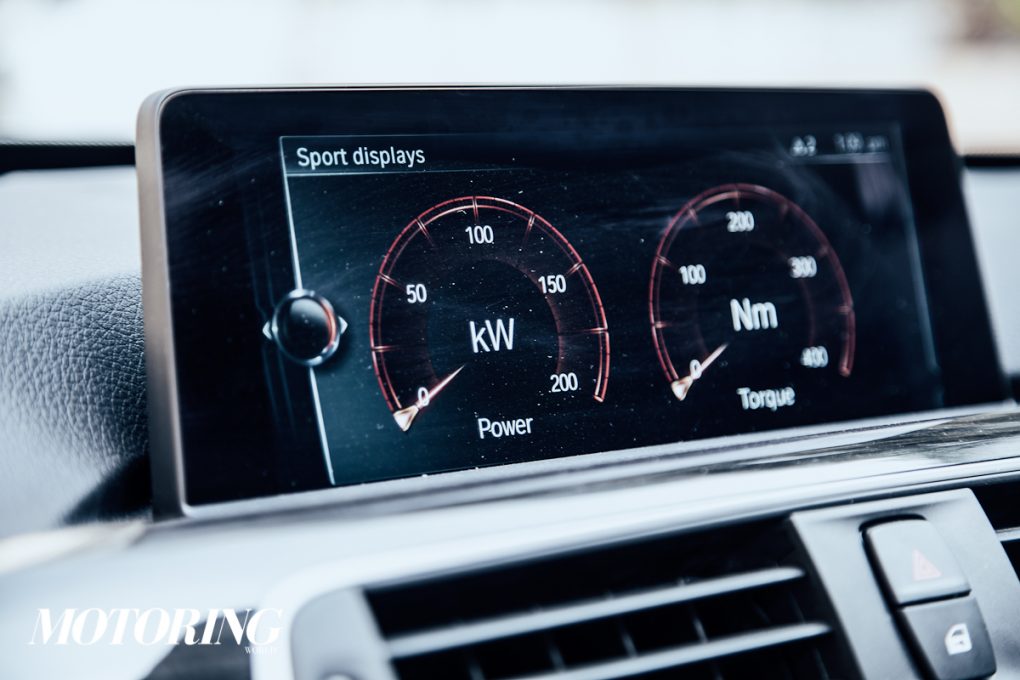 There’s no other way to put this: the 330i GT is pure bliss when you’ve opened it up. The erroneous suspension setup irons itself out when there’s a sizeable road up ahead; roads on which you can average 100 kph at least, and then it’s not so erroneous at all. The steering mans up, too, because all you need are tiny inputs to effect sizeable changes in direction, which is just how it’s supposed to be. You stop thinking about that ungainly rear, too, but that I suppose is mainly because it’s out of sight more than anything else. Give it its time and place to shine and the 330i GT excels; all you need is a small amount of patience. 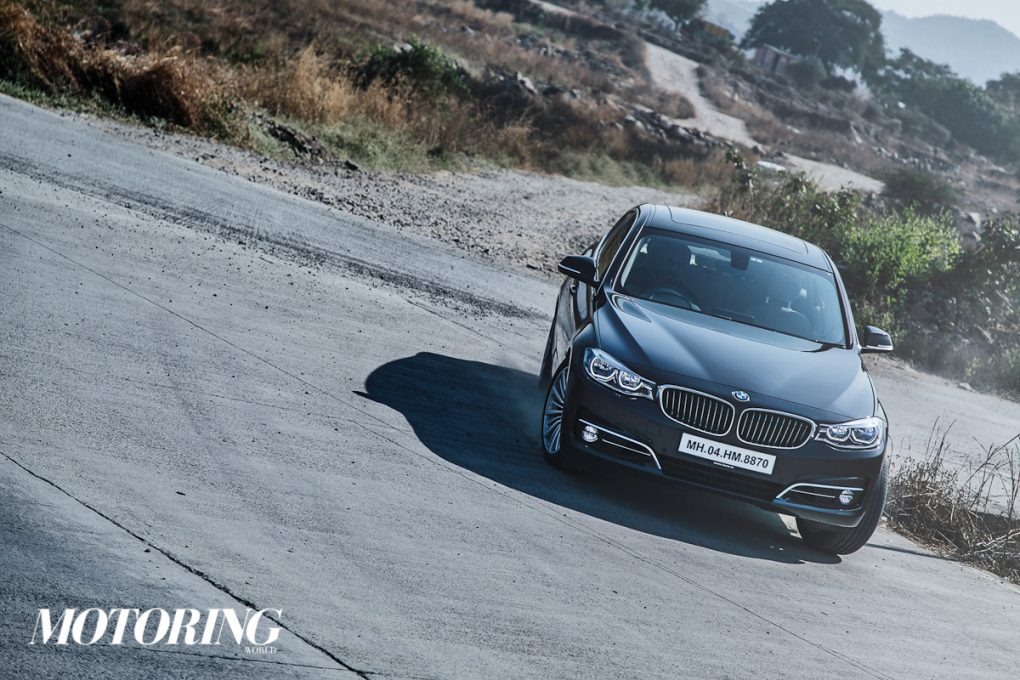 All it takes is the smallest of things to change your mind. In this case, all that was required to change mine was a bit of speed. The 330i GT is all it’s cranked up to be. It’s one fantastic GT car and an absolute hoot to drive when things get blurry. There aren’t a lot of cars that share the same characteristic, and I suppose that’s the GT’s trump card, so to speak. The very fact that it does all of this so effortlessly once there’s a bit more to weight to haul makes it unique, if a bit odd. I’m glad this BMW changed my mind about it, because I’d hate to have to tell people that all BMWs are fantastic, ‘Except for, er, that one.’ The 330i GT, then, is all right. It does its job perfectly well and is a hoot to drive, too. When you drive it right, that is. In the meanwhile, has anyone figured out any technology that allows you to permanently censor the rear of a car?