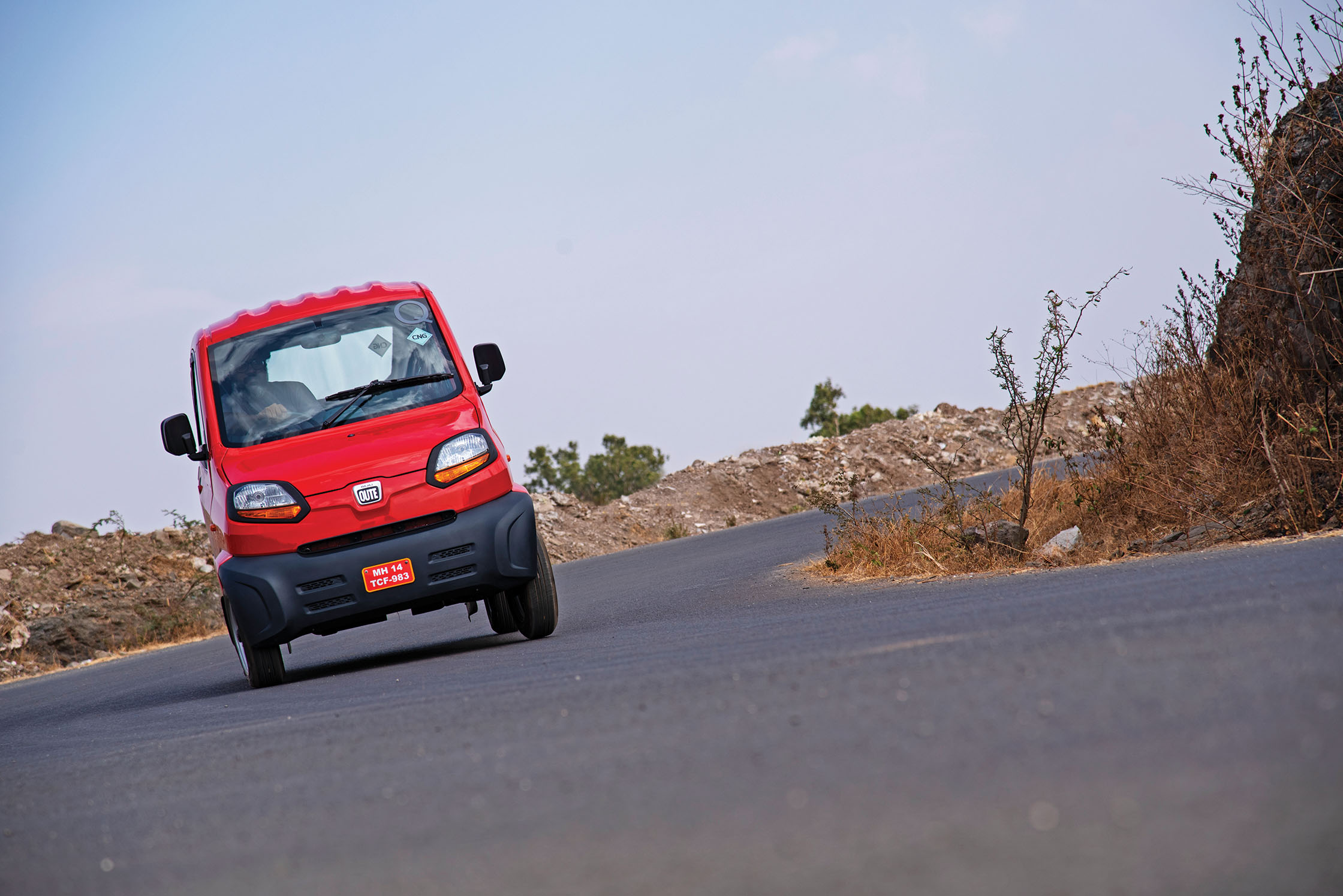 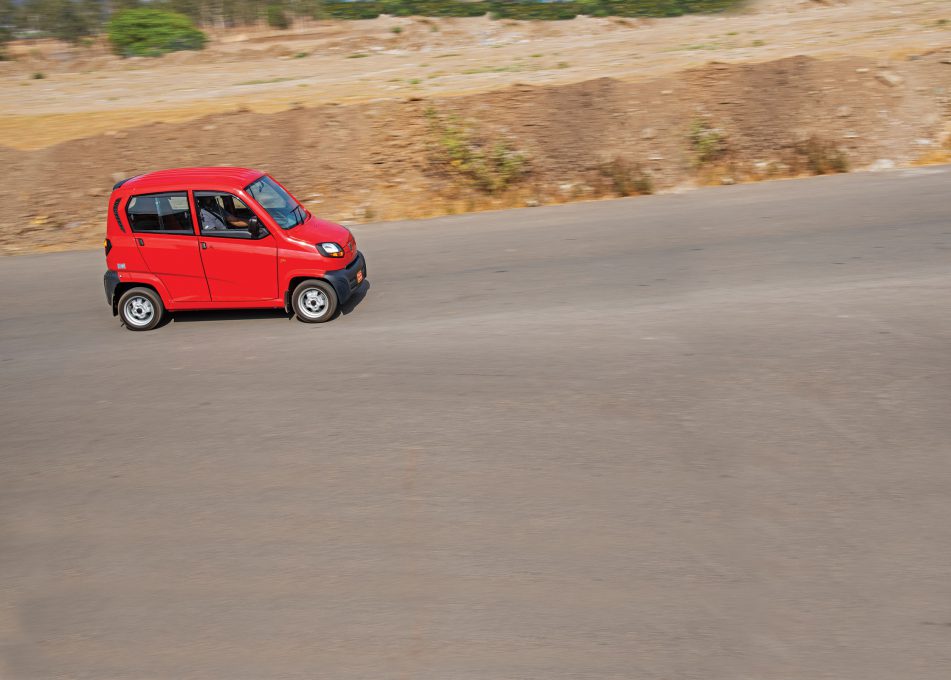 It’s not a car.’ That was probably the most repeated statement at the Bajaj Qute’s first drive. As if to ram the point home, the word ‘drive’ was entirely absent at the drive, with even the welcoming messages reading, ‘Welcome to Bajaj Qute first ride.’ Yes, it’s not a car, though that’s not what other manufacturers thought when it was revealed at the 2012 Auto Expo as the RE 60. And, since the ancient Central Motor Vehicles Act has been plodding along since shortly after the invention of the wheel, there was no definition of that class of vehicles. So, even if the attentive and/or envious manufacturers’ only concern was defining the category, their efforts threw a Supreme Court-sized spanner in Bajaj’s works. It also turned the Qute into a bit of a quandrycycle.

However, after a six-year-long battle, it’s finally here, and Bajaj may have to forgive people for thinking it’s a car; after all, India doesn’t really have that depth in its automotive spectrum to differentiate between machines for different applications. For example, a Ducati Panigale is still seen as a motorcycle that can threaten a Bajaj Platina, and so hefty taxes are slapped on the former. As far as I’m concerned, if it’s got four wheels and a steering wheel, it’s driven and not ridden. So what’s the Qute like to drive? First things first.

After a brief search through the ministry of road transport and highways’ website, whose server seems to be connected to 1000-mm ceramic discs with ten-piston callipers instead of the internet, I only found five documents that that answer to the search ‘quadricycle’, and which make the word ‘tedious’ look like a cheerful carnival. Of these, the first one from 2013 with 3.1 paragraphs was the first to mention the word ‘quadricycle’ and that it had to be included as a class of vehicle into the CMVR. The next document about the subject is from 2017. That makes even the Qute look pretty fast, and it’s limited to 70 kph.

Anyway, moving to the quadricycle itself, it’s quite interesting to look at. How anyone thought it was a car is beyond me. It’s almost exactly the same size as an autorickshaw as observed quite easily when parked alongside one. It is a natural evolution of the three-wheeler platform that doesn’t overreach in terms of space; it merely seeks to enclose that space with doors and stabilise the whole package with four wheels. It’s got a metal monocoque body onto which bolt plastic doors, boot lid and engine cover, and a metal roof, and not much else. The spirit of cost-cutting is strong in this one.

However, while the Qute’s cabin would make a hermit’s cave look lavish, it’s nonetheless evident that much thought has gone into this minimalism. In the absence of an air-conditioning system, much thought has been given to ventilation. The A-pillars contain an air vent each, while the black plastic trims on the windows feature their own vents. While this does allow in more air than if they were absent, it also lets in dust and noise, especially if the sliding windows are left open. I can’t imagine driving this in an Indian summer, though I suppose winters in some parts of the country would be all right.

As it was, I emerged from the two-hour drive thoroughly dehydrated.  The other journos at the drive wore similar sweat-stain decals, too. Bajaj officials informed me that two roof-mounted fans will be offered sooner rather than later, which might improve things a bit. I’d still carry plenty of water bottles in the Qute’s surprisingly abundant storage spaces, though. There was also a whopping CNG tank under the front seats of our test Qute. Those who aren’t comfortable with the idea of a rather explosive-looking tank under their delicate areas can always get the petrol version.

Yet another surprise was the amount of space inside this Lilliputian four-wheeler. The Qute has ample longitudinal room, especially at the back — two six-footers can stretch their legs in relative comfort. However, shoulder-room is almost a human-rights violation on both rows, though that is to be expected given the Qute’s compact width. The steering wheel is set in a commercial-vehicle-ish position, as if the driver is grudgingly serving someone the last of their rations on a small platter.

A sequentially-operated gear lever sticks out of the dashboard, while a comically cheap-looking music player sits under it with its even funnier remote control. I don’t know why, but everyone laughed at it, myself included. They should peg it as the Cabin Mood Improver. Since the motor is at the back, the boot up front can carry 20 kg and you can haul an extra 40 kg on the optional roof carrier, while folding down the rear seats will offer even more space for those who like to carry stuff around. The motor should be up for it, too.

Strangely, the 216cc single-cylinder motor acquits itself quite well in matters of locomotion — as long as you understand that it won’t ever feature in any Fast & Furious movies (wonder what would happen if one were to fill that CNG tank with NOS, though). The CNG version’s near-11 bhp is not half as important as its 1.64 kgm that peaks at 4000 rpm, with the 5-speed ’box hauling it up to the limited top speed in an easy-going manner. Progress is only slightly slower than a court case, though the Qute does make 70 kph feel much faster than it is. Once there, though, the Qute runs headlong into its rather harsh rev-limiter and spasms hard enough for you to consider making it smell your socks. A softer ignition cut would be much appreciated.

The motor is smooth and the gearshifts are a bit rubbery, and it all feels quite capable of suffering abuse. The cabin does tend to be as noisy as a shady bar on a weekend, especially when driven hard with the windows open. Not much you can do about it. What you can do a lot with, though, is the Qute’s size and manoeuvrability. The fourth wheel proves what mankind has known since before ancient Greek mathematicians got busy with translating common sense into tiresome theorems — four contact patches are more stable than three. Combine that with the 3.5-metre turning radius and you have a right little hooligan for darting through traffic. 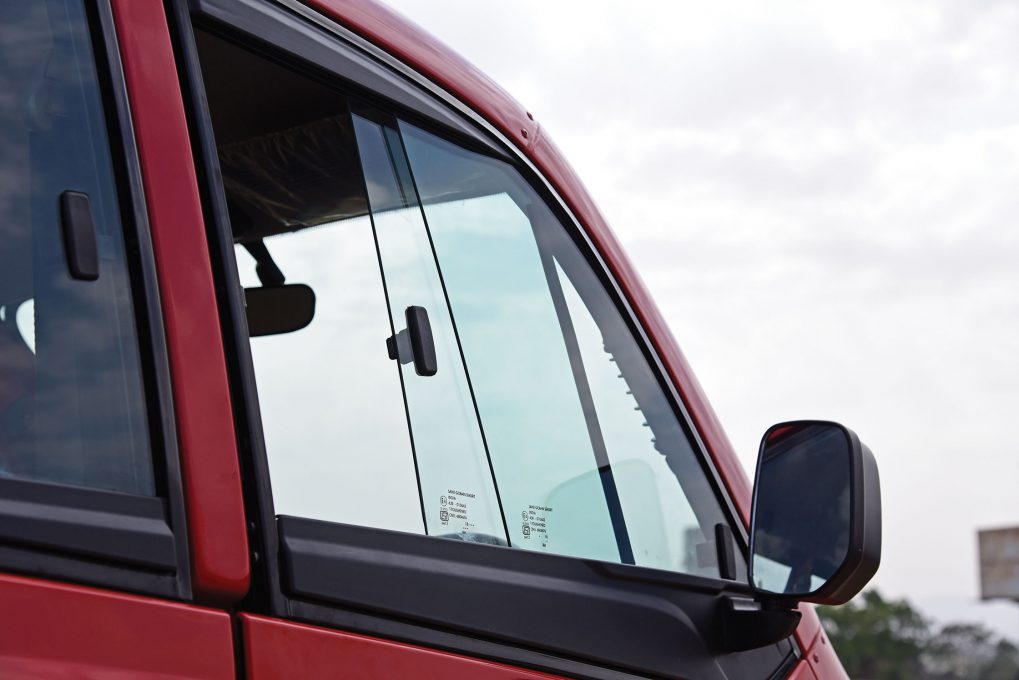 Even though there’s a fair amount of roll, thanks to the Qute’s tall-and-narrow proportions, it never gets threatening. Honestly, the Qute’s handling and stability is what I found most impressive, even despite the tyres that have less-than-ideal grip especially under hard braking. There’s no power steering and suspension is dialled-in for durability rather than outright comfort, but I quite liked the feel of it. The Qute is like a CNG-powered go-kart with a windshield and doors. In tight spaces, it comes into its own, managing feats of dexterity that no car will match. On highways, as expected, passing vehicles buffet it with their wake, but it never got scary. A monsoon-ravaged highway might be a different story, though, one for the grandchildren. All said and done, the Qute made me feel like a autowallah with a steering wheel. No wonder it looks like those maniacs are having so much fun. 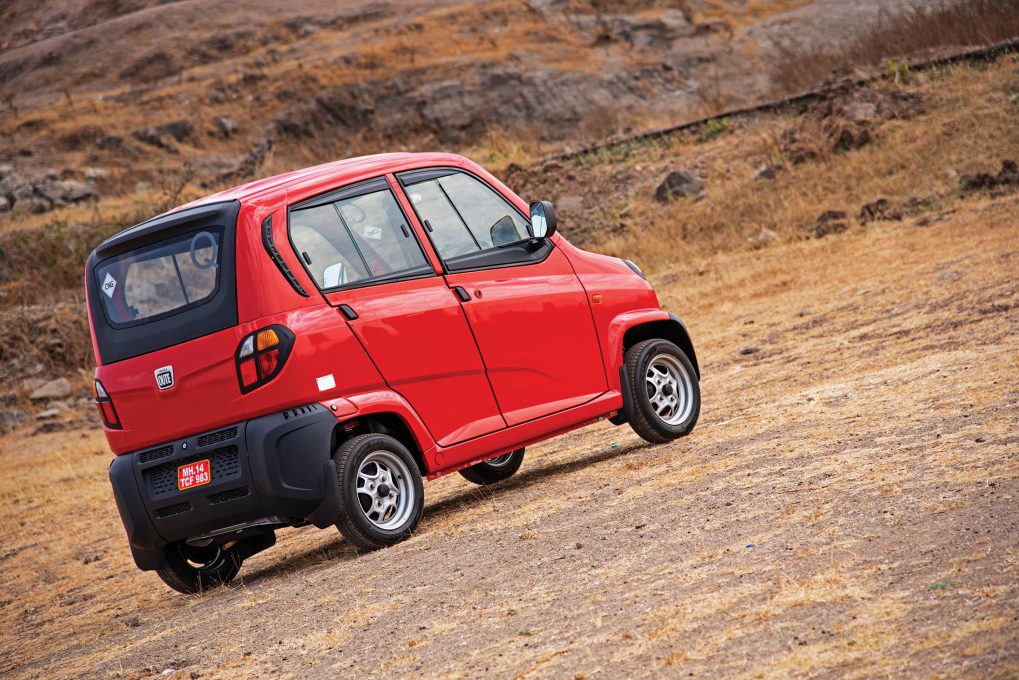 But the Qute isn’t for fun, as the  Bajaj officials’ presentation made amply clear. They didn’t even mention the price at all. Instead, they went to great lengths to highlight that the Qute has the lowest running cost compared to a CNG car or even a 150cc bike calculated via some clever graphs. Only an autorickshaw is cheaper to run and even that is negligibly so. To sum up, the Qute has greater stability, greater safety and greater convenience — than an autorickshaw. It has greater efficiency (35 kpl), greater manoeuvrability and greater economy of ownership — than a car. You’d say it has the best of both worlds, and you wouldn’t be wrong. I, for one, cannot stand to see 10 schoolkids dangling out of one autorickshaw. The Qute is safer, though a school bus is safer still. 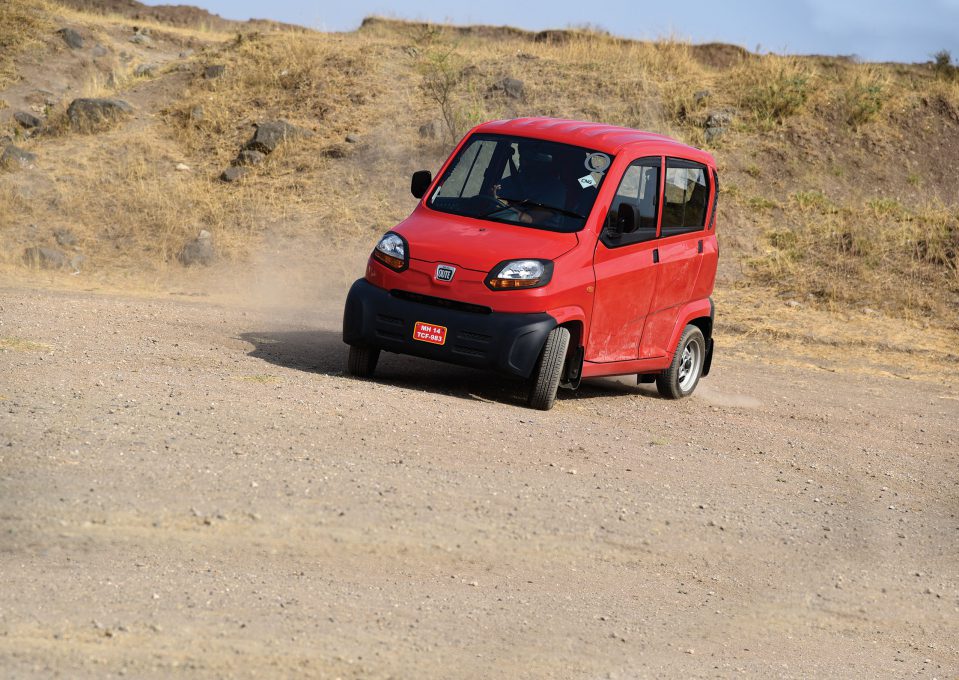 One would think that an enclosed four-wheeler that’s cheap to run is a great idea and it is, too, for those who’d use it for commercial purposes or for those who put cheap running costs above all else. However, at ` 2.83 lakh (ex-showroom, Delhi) for the CNG version, I think it asks for more than it offers, especially when you can get a much safer car for just around a lakh more. The petrol version, at ` 2.63 lakh, is still more than I’d expect to pay for something that is quite apparently rough around the edges. It lacks that all-round refinement and quality that buyers demand for personal usage.

Anything economical is welcome in India, but not something that looks and feels cheap. That said, the fact still remains that the Qute is a brilliant no-frills effort at reducing congestion and pollution in our cities. And we could all do with a fair amount of that. But will the Qute — and its inevitable competition — ease congestion and pollution  or simply become yet another  additional cause for them? Much  quandrycycle, that.