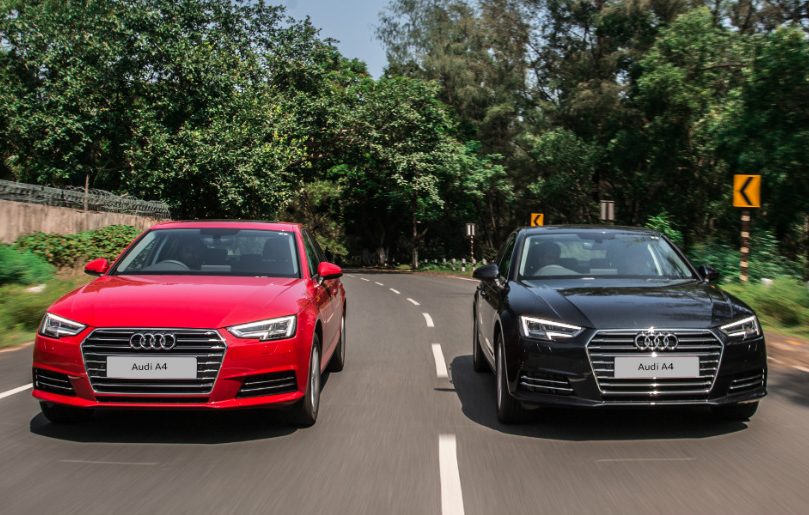 When a third of all cars you sell in the country is a single model, you know any complete model change is going to be met with a lot of expectations. And a fine toothed comb review.

For Audi, the A4 is just one such car. The outgoing generation made its way into India in mid-2008 and continues to be a success even as it bows out. A few things guaranteed its success – a decent pair of engines, sorted dynamics (for a front-wheel driven car) and an unassuming demeanour. Facelifts and updates really helped it stay ahead and despite the entry of newer competition. Like the Q7, age never really played a factor, so the arrival of the new A4 should only add to its appeal.

Built on a all-new, lighter platform, the A4 is a significant 95 kg lighter (spec to spec) than the outgoing car. You can feel it when you shut the boot lid, or even the doors. This has helped the overall numbers. CO2 numbers are down, fuel efficiency numbers have been bettered and so has performance. Audi was careful to pit the new 1.4 TFSI on the B9 to the two generations old 1.8 TSI on the B7. That does reflect better performance numbers, although include the 1.8 TSI from the outgoing car and not everything is in the favour of the newbie.

TALKING ABOUT THE MOTOR

This is quite a downsized motor for India, but not new on a VAG group product in the country. The current VW Jetta, Beetle and Skoda Octavia get this motor in different states of tune and this one is nearly identical to the Beetle, save for a few engine map alterations.

Power therefore is 148.5 bhp and peak torque is at 25.4 kgm. The 7-speed dual-clutch auto helps transfer all that power and torque to the front wheels, the only other car in the segment apart from the Volvo S60 that is front-wheel driven. It’s not the quickest motor around, although the claimed 8.5 second run to 100 kph doesn’t make it slow. What it is, is an entry A4 that delivers an ARAI claimed 17.84 kpl in the Indian Drive Cycle. Not a bad number by any stretch, except that the motor needs a bit of a workout to get to some serious speeds. Do that and the fuel economy number could take a hit, but that’s for us to figure out in the road test.

Nevertheless whatever spunk is on offer, it’s helped by the 7-speed auto that shifts quickly and effortlessly. It is slightly slow on downshifts even in dynamic mode, but that’s also down to the nature of the state of tune. Driveability is a strong point, aided by a flat-ish torque curve.

HOW’S IT ON THE INSIDE?

Spacious and very well thought out. Unlike the previous car, this one really does a good job of liberating interior room. Remember the wheelbase is just 12 mm up, so it uses other methods to increase interior room. Like a flatter dashboard, slimmer seats and trim that doesn’t eat on space. This has meant more room on the inside. The wide dashboard with the floating console gives the car a fresh and airy feel, just like on the new Q7. The virtual cockpit and set of features and controls on the central console lend it a sense of modernity that make it more than a match for the Mercedes-Benz C-Class, the current interior benchmark in the segment.

The seats have good support, even those at the rear offer excellent legroom, while the seat base also does provide some support.

The A4’s dynamics were never an issue and this one doesn’t upset the applecart either. There are some improvements though. The handling is now more neutral and less ‘understeery’, helped also by the lower kerb weight. Steering feel isn’t quite good, but it weighs in better than the previous car. Wish the steering were made of better material, this one feels a bit cheap to touch.

Now that the A4 has more room at the rear, comfort levels are further enhanced by the comfy ride. It’s got better than before rebound characteristics, only getting upset when expansion joints are hit at high speed. However, the ride isn’t a segment benchmark, that title retained by the Jaguar XE.

Save for the price, which we will know in September, the A4 could be priced at Rs 36-37 lakh, ex-showroom Delhi, a couple of lakh rupees more for the base trim while a Rs 40-41 lakh top trim will round off the A4 range for now. A diesel variant is likely to be made available in three to four months. Our suggestion? If your use is primarily city based, the petrol will be a good bet, but if you want some touring ability, we suggest the diesel should be worth the wait.