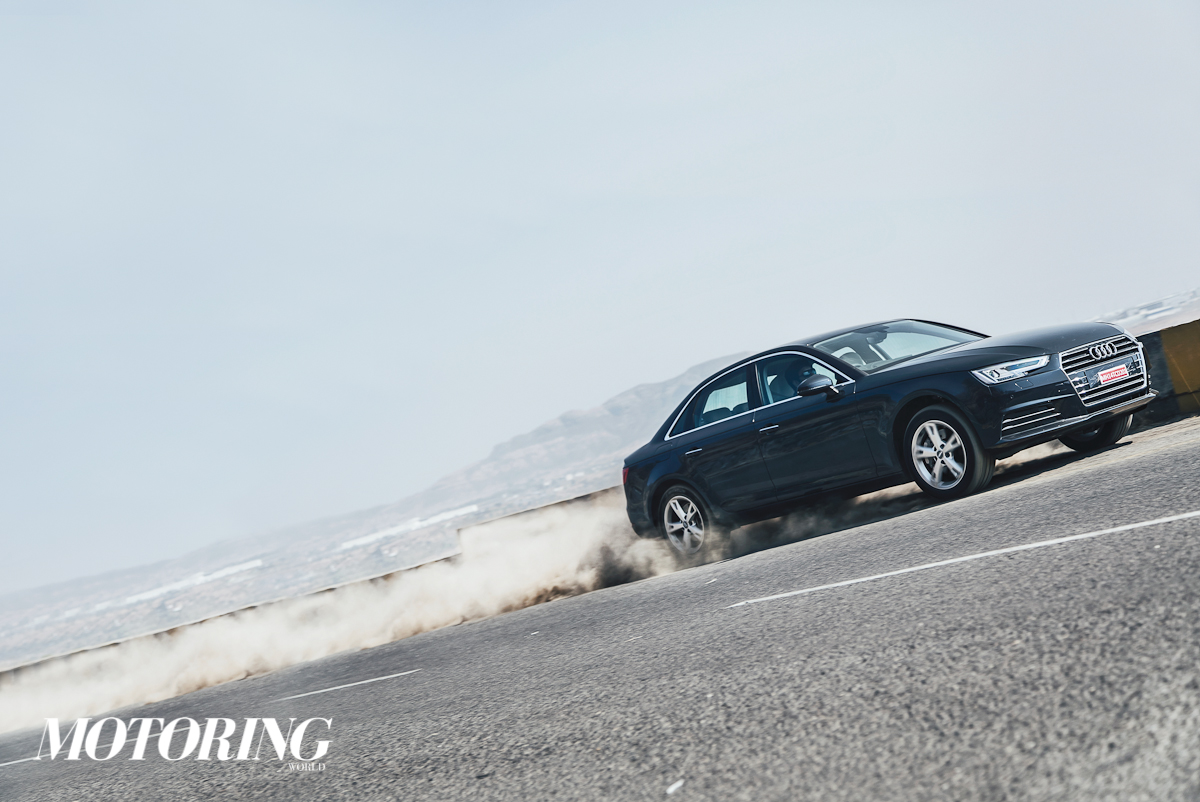 Long before I got to terms with the huge difference between regular and high-paying jobs, I was told that CEOs happen to have one of the most respected professions. On being asked if I would want to become one, I shrugged at the thought, because there were a lot of calculations, decision-making and mind-work involved in it; needless to say, I wasn’t good at any of that. But now, in hindsight, that hard work would have helped me pay the bills and, in a few years’ time, I would have bought my very own mid-size executive saloon. Which brings us to the car in question, the Audi A4 35 TDI. Can it be the diesel-powered German barge that, in a parallel universe, ferries me to and fro my MNC office?

First look at the new car and, sadly, it’s off to a good start. The lines are cleaner than before, and it’s certainly a step ahead of the previous generation (B8) A4, with sleeker looks. But even though it’s a good design, the A4’s never stands out. Blame it on the ‘family look’ or the fact that Audi played safe with this one, but it doesn’t grab attention. Fair to say, with the advent of more attractive-looking ‘entry level’ saloons like the A3, the mid-size executive segment is looking at being more premium, and a tad more mature. Which is where the new A4 undeniably does well.

Since I would spend more time inside the car and not ogling at its shimmering surface, the interior has to be spacious (both at the front and rear), has to have top-notch quality (something only an Audi can exude, as far as this segment is concerned), and the plush feeling that would put many a luxo barge to shame. The new A4 fits the bill perfectly, and some more. For instance, there’s the new-look dashboard, a full-digital display instead of the regular instrument binnacle, a three-zone climate control, and a light colour chosen for the upholstery, which makes the cabin seem more spacious and inviting. There’s also a large Apple CarPlay (and Android Auto)-equipped infotainment system for my leather-clad iPhone. And a 10-speaker music system, too. The cabin feels and looks great, except for the inclusion of wood inserts, which almost seem like an afterthought.

The rear seat is a good place to be, especially because the ride is sorted, and bad roads don’t bother the A4 or its occupants much. On the other hand, it handles predictably, without too much drama, and staying on the safer side. It doesn’t inspire you to push it anywhere close to the limit, and if your chauffeur does that, it’s time to replace him. Even without the presence of the quattro all-wheel drive system, it’s easier to appreciate the A4 diesel even more from the driver’s seat. The major reason behind that is that the bump in power and torque from the 2.0-litre turbocharged diesel engine (at 187 bhp and 40.78 kgm) over the previous A4 is quite apparent. The eventual move to VW’s modular platform has brought some extensive weight saving to the Audi, which can only be a good thing. The car thus feels more urgent, can wheel-spin at request, and has an abundance of available torque for effortless overtaking. And while the previous car’s CVT helped in making smooth progress, the current seven-speed transmission makes it all the better. The company-claimed 0-100 kph figure of 7.7 seconds and a top speed of 237 kph reinstates that less is actually more, as far as weight goes. Also, while the A4 stays stable even when accelerating hard, the lowered weight has helped it achieve an ARAI-certified 18.25 kpl.

If you buy the A4 diesel, it’s likely to be a part of your automotive cavalcade for quite some time. Not just because it’s fairly frugal to run, has a no-nonsense attitude, and possesses the ability to be a good self-drive vehicle as it is to be a chauffeured one; but also because it’s grown up, more practical, and makes a better statement than its predecessor. And even its rivals, in some cases.

So, who, apart from me in a parallel universe, is the A4 targetted at? See, it’s a fact that its rivals can handle better, offer purer driving pleasure, and even get the stability of an all-wheel drive system. The A4, as a package, works so much better — it might not be focussed on one aspect, but handles most things that matter. By saying that, we mean your highway cruising, everyday commutes, and even frequent getaways can be handled impeccably.

It’s certainly not for finding and clipping apices; instead it’s about enjoying the finer things in life. And when it all appears to get a bit ahead of you, all you would need is a dab at the accelerator pedal. Because 40.78 kgm is much more capable and promising than it sounds. Exactly like the A4 diesel.