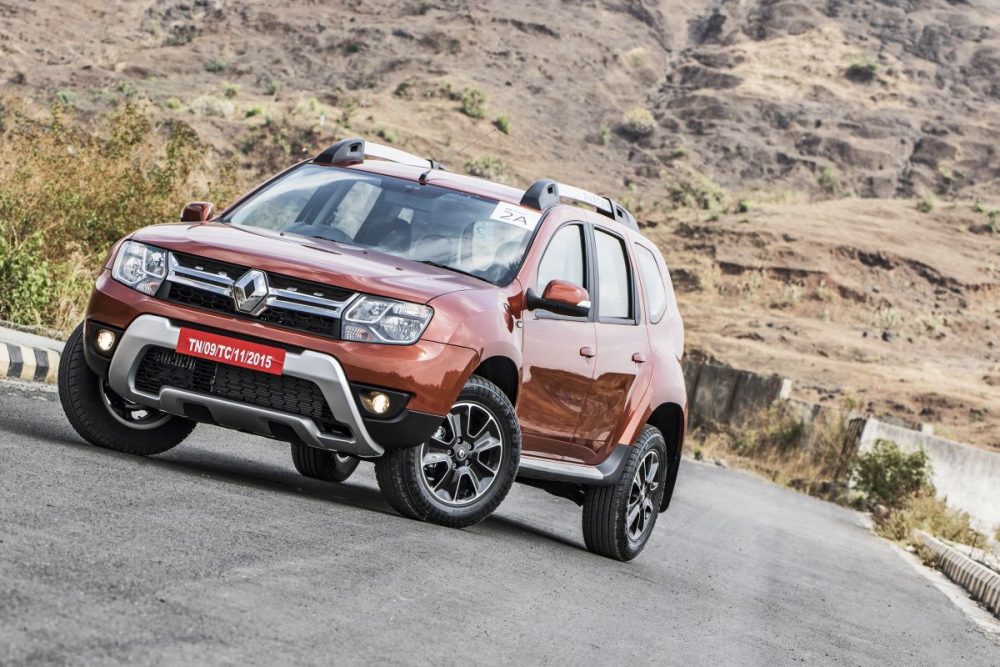 The Duster has been the darling of the SUV segment since its launch… until the Creta came along and usurped its position, that is. No amount of ride/handling perfection could sway the buyer when the low-rent plastics of the cabin were staring them in the face. Even an update that added a touchscreen with sat-nav and steering-mounted audio controls wasn’t convincing enough. Enter the new Duster, which addresses the problems that the outgoing one had.

There’s a new face, for one: a new grille with a big horizontal chrome bar that seems to be the trend with new SUVs. It is dominated by the logo that thrusts itself out ever so slightly. There are new headlamps as well – the shape hasn’t changed, but the detail has. The front bumper now has a very neatly integrated faux bulbar and skidplate that surrounds the air dam. The fog lamps remain on either side of these elements. The side view hasn’t changed much at all, except for very retro-looking alloy wheels that are finished in gloss black. No diamond-cut finish like the Terrano, sadly. There are mirror-mounted indicators, but they look like quite the afterthought, as does the ‘Duster’ sticker on the roof rails – a layer of lacquer over them would have gone a long way in making it feel more premium, while preventing single letters from disappearing via use. The low-rent lift-type door handles remain, unfortunately. The rear matches the front with a large silver faux skid plate integrated into the bumper, and the lettering on the chrome bar above the number plate recess is now raised. The tail lamps are redesigned, with LED light guides that turn on with the headlamps. They’re our favourite exterior part of the facelift.

Overall, the Duster has added oomph but missed out on truly going up the ‘premium’ ladder.

HAS THE INTERIOR IMPROVED?

If there was a ‘most improved’ award in our annual awards ceremony, the Duster’s interior would have got it. It starts out with a new colour combination of black and brown, and everything from the fabrics to plastics looks and feels better. We were given only the 110 PS RxZ versions to drive, but some things have changed for the better – the hazard switch and central lock toggle switch have moved to the top of the centre console, which is for the better. The cruise control toggle still remains below the audio unit (that’s something that you engage only at decent speeds, and you’ve to take your eyes off the road to engage it. Think about that, Renault) but all the way at the bottom lies the controls for the climate control system – a welcome addition to the Duster. The AMT gets a driver armrest, and Renault has given in and put the mirror adjust switch near the window switches on the driver’s door, where the rest of the world likes it.

We still don’t like the tachometer that goes up to 7000 rpm with no indicated redline (how many petrol Dusters do you sell, Renault?) the penthouse/basement options for the driver’s seat height, or the ungainly stalk hidden behind the wheel that controls the audio system. That said, the Duster’s interior is still the most improvement we’ve seen in a model in a long time.

HOW DOES IT DRIVE?

If you want the best-handling SUV in a reasonable price range, get yourself a Duster AWD. That’s all we’ve got to say about that. The focus here is the AMT, which is available in 109 bhp/front drive guise only. It is the six-speed gearbox from the regular manual that does duty in this car, and the shifts during normal operation are quick enough and jerk-free. This gearbox might just be the best AMT in the business right now, edging out the impressive AMT in the Suzuki Dzire diesel. It offers a manual mode as well, for when you’re feeling sporty or need the engine braking. The gearbox holds revs in this mode, shifting up only at 5000 rpm, which is a nice touch.

The Duster’s ride and handling balance remain the best in segment over bad roads, and it just about keeps up with the likes of the Creta over good roads. It flattens out bumps like nothing else – if you like pretending to be a rally driver, the Duster will be right up your alley.

IS IT WORTH IT?

The current leader of the automatic SUVs in the segment is the Creta automatic, and if you compare prices ex-showroom, Delhi, the Creta is Rs 1.5 lakh more expensive. The Duster AMT offers an equivalent amount of kit like cruise control and adjustable lumbar support to the Creta, which makes it six of one and a half dozen of the other when told to pick between the two. However, there’s no question that the convenience it offers makes it worth it, at Rs 12.87 lakh. Our heart is still set on that AWD, though…