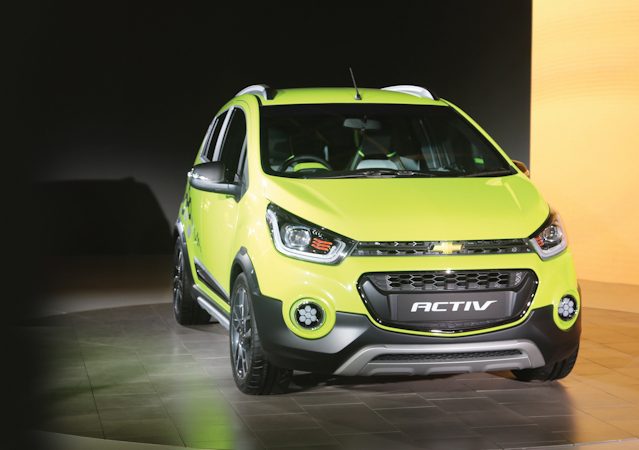 If you think work for the testing team reduces as we near the new year, you might have got it all wrong. Because unlike what we believe, there’s still real-world testing going on for upcoming cars. We look at various publications’ reports to give you a round-up of all that’s undergoing testing at the moment. The point here is that if it’s being tested, there’s a good chance that it will be launched soon.

Starting with the smallest and possibly the least expensive of the lot:

Remember the other Chevrolet show car (apart from the Essentia compact saloon) that drew the Indian car-buying crowd (and not just enthusiasts) at the 2016 Auto Expo? It was called the Beat Activ concept, had the styling similar to that of the then recently announced Spark (global name for the Beat) and some crossover bits to keep the Indian car buyer happy. The upcoming Beat facelift (similar styling as the Spark abroad, but not exactly the same car) is currently being tested, and in its latest appearance, has made an undisguised debut. Engine choices on the car are unlikely to change, and same goes for most things underneath. It’s likely to receive an updated interior design (to stay up to date with the exterior) and will reach the market sometime next year.

Averaging close to 5,000 units per month, the Tiago has certainly made a successful start as a replacement to the Indica. It’s not only hugely improved, but is also considered to be one of the best products Tata Motors has produced. What will exponentially increase its appeal is an automatic variant — and automatic in the price-conscious segment is AMT. IAB published photos of one such test mule, which further strengthens the chances of it making it to the market soon.

A refreshed fascia was among key changes made to the global i10’s midlife update. Since the Grand i10 is essentially the same car with minute differences, the changes are expected to be included on the Indian model as well. While not substantial, these updates will make the Grand i10 a slightly stronger proposition than it is right now. An Android Auto- and Apple CarPlay-equipped touchscreen infotainment system will also be a welcome inclusion, as it’s on the global model.

Based on the Tata Tiago, the Kite 5 (concept) was showcased at the 2016 Auto Expo, and has since been spotted many a time, undergoing testing. While the stubby boot issue hasn’t been addressed in any of the compact (sub-four-metre) saloons, this one’s got the largest loading capacity. What’s also expected is that, given that the Tiago was priced just right, the Kite 5 (or whatever it’s finally called) will also appeal have a very competitive pricing.

Talking of being competitive, and there’s no denying that the Swift Dzire has successfully ruled the Indian compact saloon market, averaging more than 15,000 sales every month – that’s more than what either of the Alto twins manage.  According to industry chatter, the car is likely to be introduced before the all-new Swift (on which it’s based) makes its debut. Key changes include exterior, interior, platform, and maybe even the engines; all that will actually justify the ‘all-new’ tag the car will get.

The Sail saloon couldn’t bring the kind of sales figures Chevrolet was hoping for, but with the Essentia (based on the Beat), that’s bound to change. The sub-four-metre dimensions will give it a further price drop, and having seen it in the metal, it can be confirmed that it looks marginally better-proportioned than others in the segment. Engine choices are likely to be a 1.2-litre petrol and a 1.3-litre Fiat-sourced diesel.

While the prospects of a more powerful GT TDI sound promising (considering both the Vento and the Ameo have received a power upgrade), the India-made GTI s sure to make petrolheads happy. Mules of both have reportedly been spotted, so there’s no questioning their existence; the real question is if VW is ready to bring the latter, and when.

Another 2016 Auto Expo exhibit, the Nexon also happens to be one of the hugely awaited Tatas. It will be the first sub-compact from Tata, and another promising product – considering the concept car looks have more or less been realised. A recent CarWale report mentions the presence of driving mode selector, touchscreen infotainment system, and even a starter button.

Making its debut in the American market, the thoroughly-updated EcoSport will also be coming to India. In India, it’s got fat chances of getting an AWD system, but the updated EcoBoost engine (with cylinder deactivation), an improved front-end styling, and new interior make us want the new EcoSport more. While the mules aren’t reported to be out, an earlier test car, thought to be a Kuga, was caught. Now, in hindsight and on closer inspection, it looks more and more like the new EcoSport under the camouflage.

The sub-four-metre excise cut is tempting, and as it’s quite evident, Mahindra didn’t want to leave any opportunity of making the most of said excise benefit. But at the same time, the company has to have an updated range of NEW products as well. And can you guess who can quite be the Bolero of 2017? Erm, a longer TUV, maybe?

It has been spotted already, but not with production-ready rear, as far as we can tell from the pictures (published by Autocar). So expect an arrival in late-2017, if the company decides to fast-track the process.

Had enough of it already? We’ll have the remaining vehicles (un)covered (sorry!) in part II of the list.