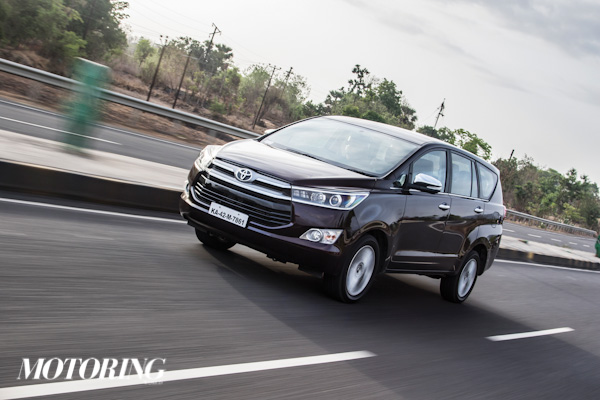 The Toyota Innova Crysta now gets a petrol engine in its lineup, and joins the two diesel engines already in the range. The engine is a 2.7-litre unit, which seats neatly in-between the 2.4-litre and the 2.8-litre diesel motors. It is a naturally aspirated unit, producing 163 bhp and 25 kgm with Toyota’s variable valve technology helping the top end of the rev range. As is the case these days, manufacturers do not wait to introduce automatic variants at a later date, with the petrol Innova Crysta available with a five-speed manual and a six-speed torque convertor automatic from the get go.

Unlike the diesel, the petrol will be available in only two trim levels, the base GX and the bells and whistles ZX, eschewing the middle VX-variant of the diesels. The price, Rs 13.72 lakh (ex-showroom, New Delhi) for the GX variant with the manual transmission; is Rs 1.25 lakh cheaper than 2.4-litre diesel in the same variant. Similarly, the most expensive petrol Innova Crysta at Rs 19.62 lakh, also maintains the same gap with the highest specification diesel version. Bear in mind though that only the bigger diesel engine gets an option of an automatic transmission. Curiously, according to the claimed figures, the six-speed automatic is more fuel efficient than the five-speed manual transmission, with Toyota promising a figure of 10.83 kmpl for the auto while it dips to single digits for the manual.

Other than the new engines, there is no other changes to the car. Both the variants come equipped with an impressive list of safety equipment as standard, with the base variant getting three airbags, EBD, ABS and Brake Assist. The ZX variants adds to that with stability controls, hill start assist and four more airbags. Importantly, both the variants are available with seven and eight seater options.