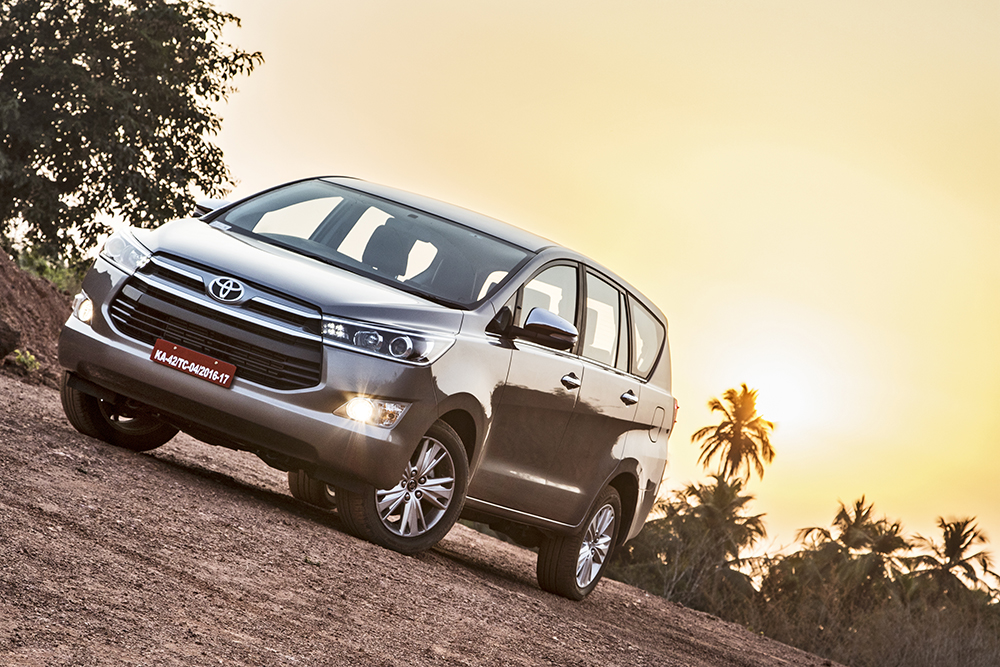 In a break from the norm, there was no ostentatious, glitzy launch for the Toyota Innova Crysta, but instead a soft launch where all the price and variant details were released yesterday online. As announced prices start at Rs 13.84 lakh and go up all the way to Rs 20.78 lakh, all prices being ex-showroom, Mumbai. However, since there are a number of engine, transmission and seat layout options to choose from, spread across four variants, lets take a detailed look at what’s on offer.

The variant breakup follows the norm set by the previous Innova, with ‘G’ as the base variant, then the GX, VX and ZX in the ascending order of trim level. While the features of G variant has not been disclosed yet, presumably since it is targeting the taxi market, all variants get an impressive list of safety aids with three airbags, ABS, EBD, Brake Assist and seatbelt pretensioners as standard. The G variant engine options, though, are also restricted to the 148 bhp 2.5-litre diesel with a five speed manual. That’s quite a jump from the former’s 101 bhp 2.5-litre unit. Note though, when Toyota had launched the Innova facelift three years back, the base model prices were hovering around the 10.5 lakh mark!

If you want to get your hands on the 172 bhp 2.8-litre, the cheapest way to do so would be buying the GX, optioned with one, or else one would need to shell out top dollar for the top end ZX version. The bigger engine is not available with a manual though, with a six speed automatic transmission as the default option. The smaller 2.5-litre continues to be available with the five speed manual. Features that are available in the GX include alloy wheels, parking sensors, rear wipers and all the standard safety equipment. Curiously, it does not get a speed sensing lock. There is no infotainment system and the AC is manually controlled, although the GX (infact all variants) can be ordered with the captain seats for the second row. The second row seats have a one-touch tumbledown feature, for easier access to the third row. GX prices start from Rs 14.69 lakh with the automatic coming for just under Rs 16 lakh.

The VX variants add some more features over the GX, although it will be available only with the 2.5-litre engine plus the manual. Over the GX, the VX gets automatic climate control and the same 7 inch touchscreen infotainment system as the ZX, faux wood and all. However instead of black leather and tan colored fabric inserts, the the VX gets black fabric all around. Other than that,  the VX has automatic headlamps, with projectors, fog lamps, a reversing camera, cruise control and an engine start/stop button. On the instrument console, the higher variants get a larger 4.2 inch MID, with the base variants make do with a small dot matrix display. The VX is priced between Rs 17.53 lakh and Rs 17.57 lakh for the 7 and 8 seater versions, respectively.

The top of the ZX, is available with the 2.5-litre/manual gearbox and the 2.8-litre/automatic gearbox options. and gets 17 inch alloys, black leather interiors and an eight-way adjustable driver’s seat.  The ZX also gets an expanded safety equipment list with 7 airbags, stability control and hill-start assist. Prices for the ZX are from Rs 19.47 lakh to Rs 20.78 lakh for the manual and automatic versions respectively.

Therefore, with taxes, octroi and what have you, a mid-spec Innova with an acceptable feature list will now set you back by Rs 17 lakh. Three years ago, you would have been spending about Rs 13 lakh for the same variant. However, three years ago, the engine had 40 bhp less and there were no standard safety features. The Innova Crysta, then, has no real competition to speak of at the price.