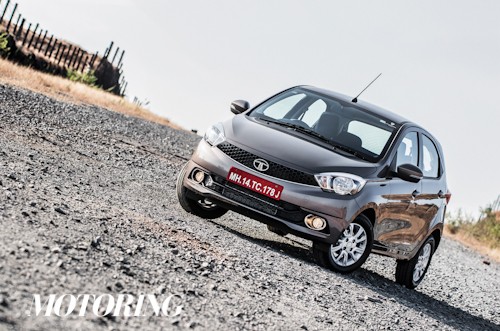 All’s well that ends well, they say, and that’s what Tata Motors would be hoping for. The end, in this case, is the guessing game of when Tata Tiago would be finally launched, and it is happening tomorrow. Tata had delayed the launch for a couple of months so that the marketing machinery can work on the name change from Zica to Tiago, since Zica sounded awfully like the ‘Zika’ virus.

The Tata Tiago is going to be slotted below the Tata Bolt in the model range, taking the place occupied by the Tata Indica eV2 now and competing against the Maruti Suzuki Celerio and the Hyundai i10 Grand. Tata is going to offer the Tiago with petrol and diesel engine options from start, both being three-cylinder units. The 1.0-litre petrol Revotron engine is rated at 69 bhp, while the 1.2-litre Revotorq diesel puts out 83.8 bhp, with the option of toggling between ‘City’ and ‘Eco’ power mode available on both the engines. While a five speed manual transmission will be the only choice at launch, an AMT cannot be ruled out for the future.

Although the official launch takes place tomorrow, we already had a go at the erstwhile Zica some months back, before the name change, and here’s the first drive review.