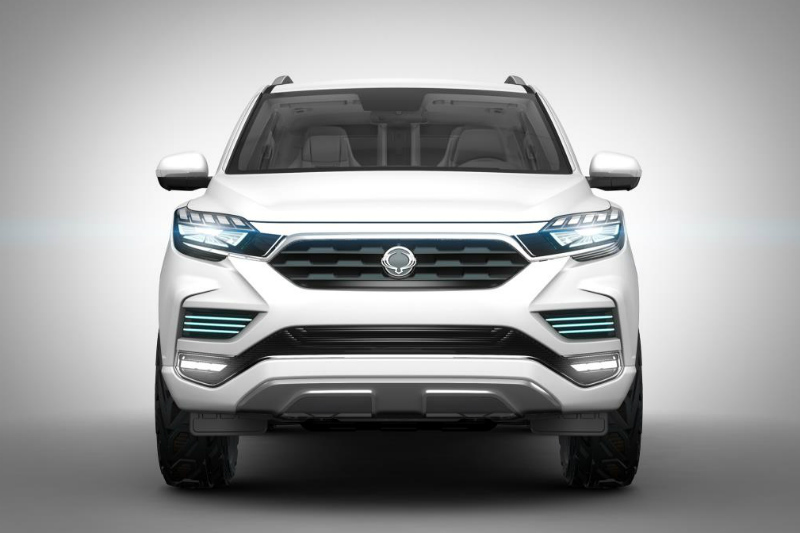 Ssangyong has unveiled the LIV-2 (Limitless Interface Vehicle) Concept at the ongoing Paris Motor Show. The second iteration of the LIV-1 concept will eventually turn into the next generation Rexton. Based on a body on frame structure, the production version of the vehicle is expected to be launched next year.

It’s quite close to production evidently as Ssangyong has finalised the engine choices: a 2.2-litre diesel (180PS, 420Nm) complete with an electronic variable geometry turbo, and a 2-litre turbocharged petrol. A six-speed manual gearbox is standard, while an optional six-speed automatic will be on offer with the petrol, and a Merc-sourced seven-speed unit on the diesel.

Said to be inspired by Ssangyong’s ‘Nature-born 3 Motion’, the LIV-2 concept also has the front-end styling that the company wants to use on all future models. The concept is a smidgen under 5 metres, has electric side steps and the ability to light up the path for ingress and egress in the dark.

Inside, the LIV-2 gets three screens: one on the centre console, while the other two are positioned on seat backs. Apple CarPlay and Android Auto compatibility is standard and the second row centre console allows to adjust the surround sound settings as well.

And that’s not all. Readying the car for more stringent crash regulations and safety, Ssangyong has nine airbags in the LIV-2. Advanced Emergency Braking System can even brake on its own, while Lane Departure Warning, Blind Spot Detection, etc. are all standard, too.

The new Rexton will be positioned against the new Toyota Fortuner, new Mitsubishi Pajero Sport, new-ish Trailblazer, and the Ford Endeavour. And it looks quite promising indeed, doesn’t it?