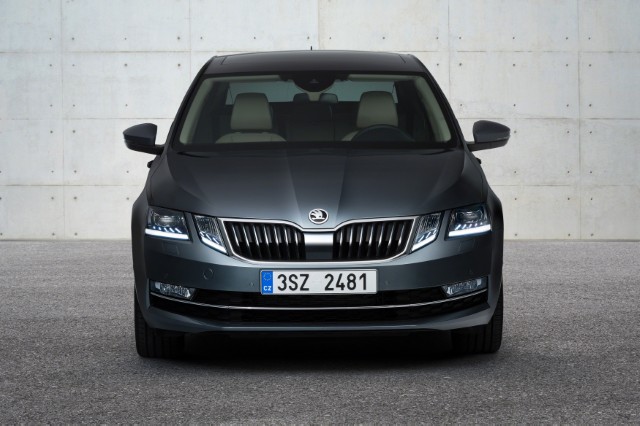 The current generation Skoda Octavia was showcased in late 2012, and went on sale a couple of months later. Four years hence, Skoda has decided to update its D-segment car. Announced today is the Skoda Octavia facelift, which marks its entry later this year, with deliveries set to begin in 2017.

A redesign up front brings a new headlamp arrangement (very pre-facelift W212-esque, but still looks good) complete with optional LED tech. The rest of the design remains unchanged apart from a few tweaks. Complementing the change will be new design alloy wheels, with sizes varying from 16-inch to 18.

On the inside, there’s a new 9.2-inch touchscreen infotainment system. New driver assist programmes have been added including trailer assist which helps park the car (by taking over the steering at low speeds) when towing. There’s also a customisable key (which can save multiple users’ individual settings), heated steering wheel, and even a removable torch on the Estate version. See, it’s not just the brollies!

There’s also a huge amount of space inside, with the Octavia offering up to 590 litres with all the seats in place. Once folded they can help increase the boot space to 1580 litres. If that’s not impressive, the Octavia Combi shines with 610 litres of loading area, which increases to 1740 litres once the rear seats are down. Both versions have 73 mm of legroom at the rear, which is great for those looking be chauffeured around in the Octavia.

But the car has also appealed to keen drivers, irrespective of generation or model — all versions have been good. This one, based on VW’s lightweight MQB structure, will continue with the tradition. It gets engine options ranging from 1-litre to 2-litre capacities. Gearbox choices include a manual or dual-clutch DSG units, and while front-wheel drive is standard, one can also opt (in markets abroad) for all-wheel drive if the car’s specified with either 1.8-litre petrol or 2-litre diesel engine. There will of course be the more driver-orientated vRS models later.

There’s also an optional Dynamic Chassis Control, which lets the driver select variable steering and damping modes depending on the roads and their style.

All that sounds great, but when does this come to India, you may ask. While we are also eager to hear official confirmation but a launch next year looks likely. And for those who can’t quite wait for a new Skoda till then, there’s the new Rapid scheduled to be launched on November 3. Currently the Octavia retails at Rs 16.76 lakh onwards (ex-showroom, New Delhi).