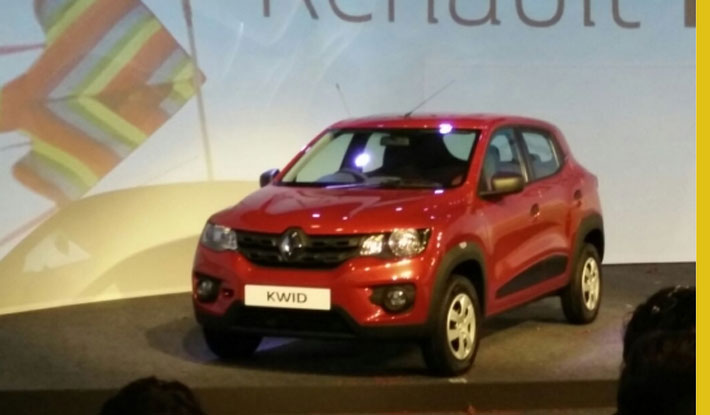 Renault’s new small car is called the Kwid, and it is the first small crossover-ish hatchback that will compete with the likes of the Maruti Suzuki Alto and Hyundai Eon. It will cost Rs 3-4 lakh rupees, ex-showroom, when launched in August or September, just in time for the Diwali rush.

Yes, it is the same car whose concept was shown off at the 2014 Auto Expo. Of course, it has lost the balloon tyres and massive rims (sadly) but it is still an attractive design with more than a few hints of Duster in it, like the headlamp surrounds, grille design and kink in the C-pillar. It is 3.68 metres long, 1.58 metres wide and has a ground clearance of 180 mm. Like the Datsun GO, the Kwid runs on 13-inch tyres that are clad with snazzy wheelcaps and frugal engineering here is evident in the three-bolt design. The turn signal is integrated into the body where the black plastic and metal fender meet, which isn’t a very good-looking element.Other cues it takes from the GO are the unpainted mirrors and single wiper. The top-spec variant has fog lamps and an airbag and a touchscreen sat-nav system are on the options list. The sat-nav system looks similar to the unit present in the Duster, but the AC controls are a little different. It doesn’t seem to have a rear demister or wiper as an option, or a vanity mirror on the sunshade. It will sport best-in-class room, though, claims the company.

The engine is an 800 cc, three-cylinder petrol unit that the company claims does not have any breakthrough technology, but with all the knowledge that Renault has thrown into it. This is what helps it get a claimed fuel efficiency figure that is best-in-class. There are no power or torque figures released, but a five-speed manual gearbox is present, although it doesn’t seem to be the same one in other Renault-Nissan small cars, and an AMT might also be in the pipeline.
We can see here that the top-spec Kwid will be called an ‘RXT’ – suggesting that it might just follow a variant naming scheme that is a mix of the GO’s and Renault’s usual ‘Rx_’ nomenclature. That will give it at least three variants.

The Kwid will be launched in India first, and then other developing markets. It has an astounding localisation level of 98 per cent, which bodes well for other cars that originate from this CMF-A platform, which the company has pumped in a total of Rs 300 crore for development, engines and production lines. Renault currently has 1.5 per cent market share, but targets five per cent market share eventually with products like the Kwid. It will also continue with the plan to make India a global export hub, and the Kwid will contribute to it by being exported to Asia-Pacific countries. India could become the fourth-largest car market after the US, China and Japan, says Carlos Ghosn, CEO of Renault-Nissan.