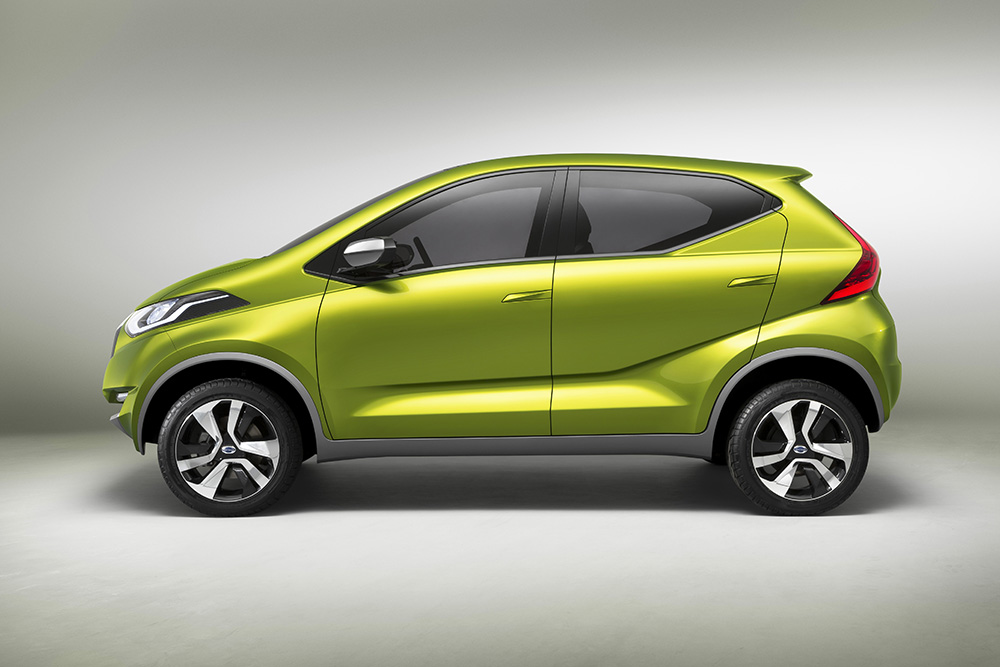 DELHI, India (Feb. 5, 2014) – A look into Datsun's possible future is revealed by a dramatic new concept being given its world premiere at the 12th Delhi Auto Expo 2014 – the Datsun redi-GO CONCEPT. The name reflects the car's character. It is ready to support potential customers to explore a new day, to challenge new things and to build a way ahead. It also expresses the excitement of "ready to go" before people start their day's journey.

The Datsun redi-Go, first seen in concept form two years ago at the 2014 Auto Expo, is expected to launched  on April 14th. The redi-Go is going to compete with the likes of Hyundai Eon, Maruti Suzuki Alto and its half-brother the Renault Kwid, and will come with the same 1.2-litre petrol engine in the 67 bhp tune as in the Datsun Go and Go Plus.

In concept form, redi-Go reminds one of the Chevrolet Beat in profile, down to the acid green colour and the high window sill. However from the test-mules which have been spotted on road, that upward kink near the rear quarter-window seems to have been replaced by a more conventional line extending from the bonnet to the middle of the tail lamps, the outline of which was present on the concept itself. What is expected to make it to production, the 2350mm wheelbase from the concept, the cab forward design and the jutting out boot which should result in a spacious cabin, the mini-crossover styling cues along with the vertically-stacked tail lamps from the concept.

Datsun has not been generating the number which they had hoped for with their ‘Go’ range of cars and that’s because Indian consumers are an image conscious lot. Any product which is built around the idea to be the cheapest, or to be the cheaper/value-for-money/more-accessible/more-youthful brand or whatever marketing spin that you want to put on it, never works in India. Indians do not like paying much, but at the same time they don’t want others to know that. Renault has hit the nail right on the head with the Kwid, exploiting the Indian market’s weakness for ‘more car’ per rupee spent, creating a product that looks expensive, but actually has a very reasonable price. Datsun needs to move in that direction, and hopefully with the redi-Go, it can give us a stylish hatchback, for a competitive price.