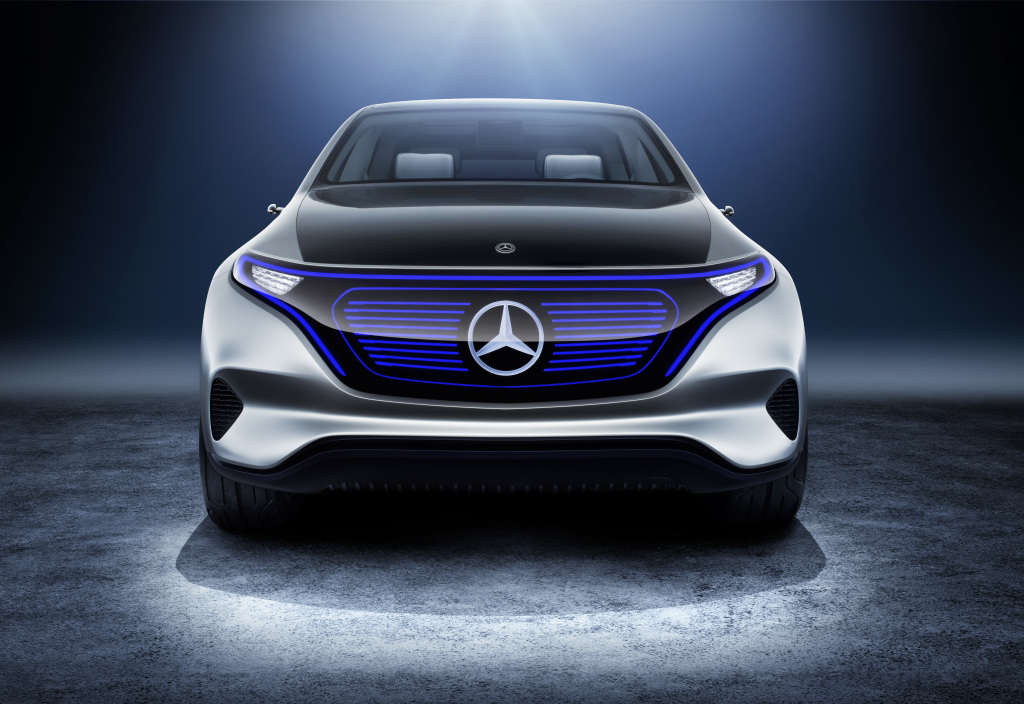 It isnt everyday that Mercedes announces a new sub-brand. All-electric Mercedes Benz(s) of the future will be under the EQ brand umbrella, with the first car, a GLC-sized SUV, to be launched in 2019. By 2025, Mercedes expects the EQ range to balloon to 10 products, and expects anywhere between 15 percent to a quarter of their global sales numbers to comprise of EQ cars, by then. A play on ‘IQ’, the E in EQ, predictably, stands for Electrical. All EQ cars are going to be powered purely by electricity with Lithium Ion batteries as a power source and brush-less motors to power the wheels.

The first of the EQs is going to be this, a mid-sized SUV, with a large battery pack and two motors in each axle to give it all-wheel-drive capability. While it is at times a bit useless to analyze concept car designs, since they are a bit exaggerated, there are some interesting things to note. To set it apart from the rest of the Mercedes range, the EQ comes with more softer and rounded edges with a lack of any strong lines running along the side. This ‘pure’ sheet metal design expected to reach the final production stage, along with the large enclosed the panel up front in place of a grille.

Inside too, the clean look of the concept’s dashboard with most of the switches replaced by a large S-Class 24 inch type display, will make it to production. The switches, if any, are replaced by touch-pads and touch sensitive areas to control the ac vents and seat adjustments.

The EQ concept is based on a new modular platform which will allow it to be the base of a wide range of cars with different wheelbases and lengths. The lithium-ion battery too is designed with a modular cell structure and can be scaled up and down to different capacities. The one powering the concept is rated at 70 kWh, and provides a range of 507 km.

The battery pack, which is mounted low in the chassis, powers two electric motors with a combined power output of 402 bhp and 71 kgm, not shabby by any means and which is capable of dishing out a sub five seconds zero to hundred time. The electric motors act as a four-wheel-drive system, apportioning torque among themselves as required. The EQ also comes with a huge suite of driving aids with all the systems designed with an eye on autonomous driving capabilities.

The EQ suv is not going to be the only German electric SUV around. Audi will be ready with a production version of the Q6 e-tron by then. And that has three electric motors with a combined output of 496 bhp.